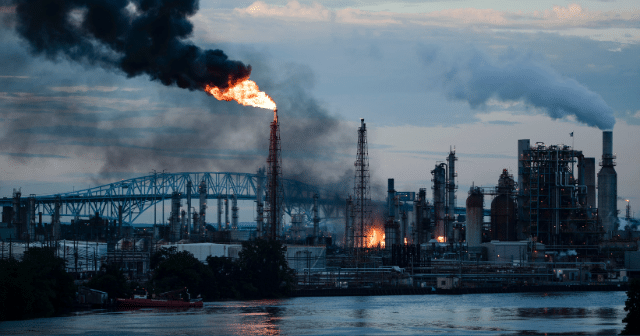 In this June 21, 2019 file photo, flames and smoke emerge from the Philadelphia Energy Solutions Refining Complex in Philadelphia. The owner of the largest oil refinery complex on the East Coast is telling officials that it will close the facility after a fire last week set off explosions and damaged the facility. Philadelphia Mayor Jim Kenney said in a Wednesday, June 26 statement that Philadelphia Energy Solutions has informed him of its decision. Kenney says the more than 1,000 workers there will be impacted. The 150-year-old oil refining complex processes 335,000 barrels of crude oil daily. (AP Photo/Matt Rourke, File)

A little more than a month after the spectacular explosion at Philadelphia Energy Solutions’ Philadelphia Refining Complex on June 21, debris littered a nearby highway and charred blackness defaced a storage tank on its grounds. The more than 100-year old bruised and battered refinery has since been declared closed, with management short on funds and unable to rebuild on July 21 announced the second Chapter 11 bankruptcy for PES in so many years.

The loss of the 335,000 bpd refining complex, two separate refineries—Girard Point and Point Breeze joined into one, accounted for 28% of the refining capacity in the Central Atlantic, reducing PADD 1B capacity to 866,700 bpd. Gasoline demand is strong in the heavily-populated Central Atlantic states, which include Delaware, Maryland, New Jersey, New York, and Pennsylvania, along with Washington, D.C. In addition to Pennsylvania, only N.J. and Delaware have refining capacity, with the region dependent upon imports and oil product deliveries shipped from refineries along the Gulf Coast. 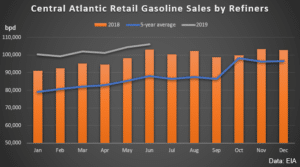 Predating the late June loss of the Philadelphia refinery, the region’s refiner gasoline sales trended higher, up 6.8% year-on-year and 23% above the five-year average during the first half of 2019, data from the Energy Information Administration details. Greater regional demand is occurring as the loss of the Philadelphia complex reduces regional supply, with 160,000 bpd of gasoline supplies and 100,000 bpd of distillate fuel supply along the East Coast having vanished and gone.

Refining economics are challenging along the East Coast, where refiners must import crude oil that is pricier than available supply in the United States, with crude by rail deliveries shipped a thousand miles away from North Dakota only viable when Brent crude is trading at a large premium to domestic grades, notably West Texas Intermediate. Import dependency prompted a round of East Coast refinery closures 10 years earlier during the Great Recession.

Gulf Coast oil products movements to the East Coast have steadily increased, up 1.5% during the first half of 2019 against year ago, averaging 81.6 million bbl per month, and 2.1% more than in 2016. Beyond incremental gains, capacity along the Colonial and Plantation pipelines won’t expand to offset the Philadelphia refinery loss, while the 99-year old Jones Act handicaps waterborne deliveries from Gulf Coast refineries.

Merchant Marine Act of 1920 requires goods shipped between U.S. ports to be transported on U.S. built, owned and operated vessels. A tight fleet of Jones Act compliant vessels can lift the transportation differential by $3 bbl against a non-Jones Act vessel, potentially making the trade uneconomical and partly explains the large amount of gasoline imported along the East Coast. 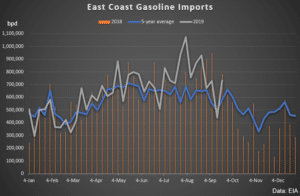 On September 25, Limetree Bay Ventures announced the appointment of Brian Lever as president and CEO, as the company gets ready to launch refining operations in the U.S. Virgin Islands at St. Croix with a 200,000 bpd capacity in December. Limetree Bay Refining is restarting the former Hovensa plant, which previously shipped product along the Atlantic coastline. The refinery is not subject to the Jones Act.

Limetree Bay is seen filling some of the supply lost because of the PES shutdown. Yet, the refiner will also look to take advantage of arbitrage opportunities in Latin and South America, with Mexico contending with inadequate refining capacity and sliding crude production. U.S. sanctions on Venezuela have choked off exports from the South American country, providing opportunity to capture market share in the region. Limetree Bay will also provide marine fuel oil compliant with new regulations set to take effect globally January 1 under the International Maritime Organization diktat.

In late August, S.G. Preston emerged as a potential buyer for the Philadelphia complex, but would convert operations to produce renewable diesel, marine diesel and jet fuels. In 2016, S.G. Preston reached a supplier agreement with JetBlue to provide the airline 33 million gallons per year of a biofuel blend.

A week later, news surfaced Philip Rinaldi, former CEO of PES who retired in 2016, formed Philadelphia Energy Industries with financial backers to purchase the refinery. Rinaldi said he would modernize the plant and highlighted the strategic significance of the refinery. 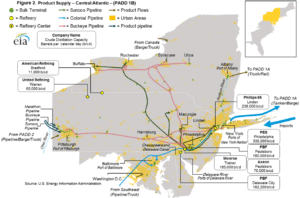 A settlement was reached in late August, with the loss of the Philadelphia Refining Complex appearing to be the catalyst. PES was a major shipper on the pipeline. Under the terms of the agreement, westbound shippers are guaranteed pipeline space through 2024. After 2024, Buckeye can pursue reversing pipeline service to west-to-east to Altoona.

The sudden and unexpected loss of the Philadelphia Refining Complex in late June has reshuffled market economics in the Central Atlantic, potentially providing enduring arbitrage opportunities. Whether the complex is rebuilt and modernized as an oil refinery or converted into another industrial use, market forces have been unleashed.