Skip to content
Category: Agriculture May 21, 2020 by DTN Team 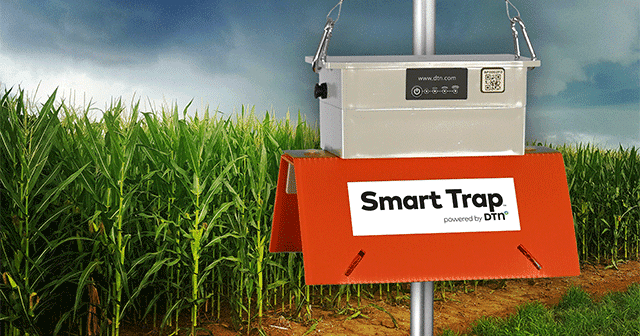 During July, corn and dry bean fields are full of crops that will keep the world fed. However, those crops can draw pests. One of the most problematic is the western bean cutworm. Luckily, it’s not too late to address this critter and avoid extensive damage.

DTN has the tools to help you. Our agribusiness solutions protect your profitability year-round. From planting to harvesting to market, our SmartTrap product helps you boost your bottom dollar. Reach out to a DTN associate today for a free demo.

What Is the Western Bean Cutworm?

In the moth stage, it is about an inch and a half wide and has black stripes on its wings. These stripes run perpendicular to the thorax. In the larvae stage, the western bean cutworm starts as a dark brown color. As they age, the larvae change color. Eventually, they are tan with black stripes on the head that run parallel to the body.

The adult moth is a nuisance. But in the larvae stage, these insects are nasty pests to corn and dry bean farmers.

The western bean cutworm can lay clusters of five to two hundred tan eggs on the top leaves of corn stalks. This process typically happens during peak flight season in late June and early July. The eggs have a gestation period of five to seven days, and they turn purple just before hatching.

Once the eggs hatch, the larvae move up the plant and start feeding on the corn tassel. Soon they move onto the ear. By late August or early September, the larvae move into the soil to hibernate. They emerge as adult moths the following year.

The western bean cutworm starts by feeding on the foliage and pollen of the corn plant. This damage will result in low pollination rates. Once the ear of corn forms, the cutworm begins feasting on the silk channels and then moves onto the kernels.

The damage from this cutworm can also lead to secondary problems. Fungal spores can develop in openings the larvae create in the corn ear. Western bean cutworm damage in corn crops can make as much as a 40% drop in yield.

Silage corn doesn’t have the same risk, but the kernel damage will reduce the overall quality of the crop.

Dry bean crops are another common target for the western bean cutworm. They will first feed on leaves and flowering parts of the beans.

However, if the worm gets into the pod, it eats the seeds and significantly damages the crop yield. The western bean cutworm travels farther in dry bean crops than they do in corn crops. They typically travel down the crop rows rather than across.

Scouting for the Western Bean Cutworm

The best time to scout for this particular pest is once peak flight season arrives in late June and early July. It’s most effective to check about twenty plants in a row in at least five different areas of each cornfield.

A single egg mass can cause infestations on plants twelve feet away. So be sure you have done scouting inspections throughout your fields. Check each area that is in a different stage of growth.

When inspecting a corn plant, begin by checking the top surface of the uppermost leaves. You need to look for the tan eggs before moving onto the tassels where larvae may be feasting.

It helps to hold the leaves up to the light and look for shadows. Shadowy spots may indicate a mass of eggs.

The western bean cutworm prefers corn plants that are in the late whorl stage. Plants in this phase provide a much higher survival rate for the larvae. The late whorl stage gives the insects extra protection and nutrients to help them make it to adulthood.

Dry bean plants are harder to scout because of the dense leaves. If the western bean cutworm is in a cornfield, then adjacent dry bean fields are at significant risk, as well.

It is important that you not rely on Bt traits for control of this pest. Most Bt traits do not address the western bean cutworm. So scouting is essential even in Bt fields.

Insecticide treatments are the most effective control for the western bean cutworm. If scouting shows eggs or larvae in at least 8% of the crop, chemical control might be necessary.

The pesticide application needs to happen after hatching or after the corn tassels emerge. But it also must occur before larvae get into the ear. One clue that helps with planning is the egg color. If you spot purple eggs, you can expect them to hatch in about 24-48 hours.

The best timeframe for application is about ten to twenty days after peak flight for adult moths. This window typically allows the eggs to hatch but doesn’t give the larvae enough time to infest the ear of the corn.

Using the DTN Smart Trap is the most accurate way to monitor the peak flight period of adult moths. You receive precise pest counts each day so that you can plan accordingly to protect your crops.

If the corn plants are in the brown silk stage, then the larvae will enter the ear more quickly. The emergence of the tassel means that the pollen is gone. When this food source disappears, the larvae move into the kernels.

DTN Doesn’t Leave It Up to Chance

DTN is here to serve you. Our full suite of agribusiness solutions gives you the tools you need for profitability.

From actionable weather forecasts to accurate pest counts, our products make your work easier. Contact us today, and we will help you keep your fields full of profitable crops.