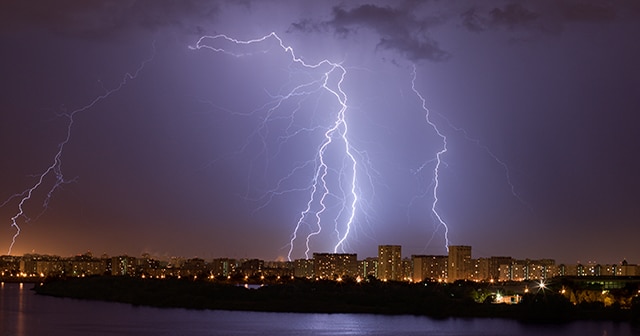 At any given time, there are 1,800 thunderstorms in progress across the globe. With them comes lightning, an electric current that most often results from small bits of ice bumping into each other as they move around in a cloud, causing a build-up of electrical charge.

Thunderstorms can produce both negative and positive bolts of lightning. Almost 80% of bolts occur within the storm and considered are cloud-to-cloud. The rest are called cloud-to-ground strikes, or CGs.

A more powerful type of lightning is a positive bolt. These originate high up in thunderstorms. They form similarly as described before, but contain positively charged particles connecting with a negative charge at ground level. Less than 5% of bolts are this type, and yet they tend to do the most damage. That’s because the distance they travel is much more significant and therefore builds up a larger electrical field. The additional path length leads them to be up to ten times more powerful than negative bolts of lightning.

Positive lightning can strike up to 25 miles away from the core of a thunderstorm, which means it can hit far outside the area where it is raining and in an area where the sky appears to be clear. These are known as “Bolts from the Blue,” and contradict the common myth that lightning only strikes when it’s raining.

Lightning is extremely hot. The flash of light that we see can produce temperatures in the air nearby that are up to five times hotter than the surface of the sun. This immense heat causes the surrounding air particles to expand rapidly, and the accompanying vibrations of the air help to create the thunderous noises we hear after seeing the flash of lightning. These extreme temperature changes can cause power surges and even fracture concrete and brick.

Severe weather is nothing new, but by using existing tools and research to determine the probability of weather events and the consequences associated with them, weather-related losses can be reduced dramatically.