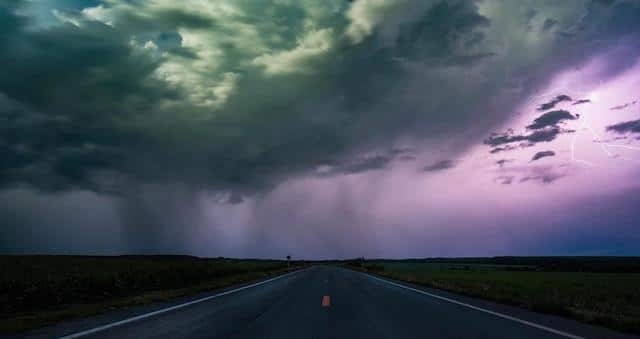 Tornadoes are one of the most fear-inducing types of weather in the United States, with some of the most dramatic weather images and video capturing the undoubted destruction they cause. But there are many other cases in which non-tornadic winds can have a dramatic effect on transportation infrastructure. Here, we will take an in-depth look at some of the most common examples, investigating their causes and potential effects.

Severe thunderstorms can still be dangerous even if a tornado does not form. The most common source of thunderstorm wind damage is from straight-line winds. As a thunderstorm intensifies, the strength of its updraft (a shaft of warm air that rapidly rises, sometimes as high as 10 miles or more) increases. As the air rises, it is cooled by expansion and by evaporating precipitation within the clouds. This cooled air will then rocket from its apex back toward the ground in the form of a downdraft, reaching speeds that frequently exceed 60 mph and sometimes even 80 mph or more. Upon reaching the ground, these winds often spread out along the leading edge of an advancing thunderstorm or line of storms. Since they are blowing in a generally uniform direction along any point in the line, they are called straight-line winds. These winds can sometimes race outward, far ahead of the actual storm, creating what is known as a “gust front”, or a line where the rain-cooled thunderstorm outflow collides with warmer air in the environment. When gust fronts from two seperate thunderstorms collide, they can cause air to rapidly rise and may even spawn new thunderstorms.

When thunderstorms become increasingly organized, sometimes along a boundary between air masses (a front), the updraft/downdraft system can become optimized to the point where extremely strong winds become possible. This phenomenon can be seen as a bow-shaped return on Doppler radar known as a “bow echo”. The bow shape is created by stronger winds surging out ahead of the main line of storms. If the conditions are exactly right, these bow echoes can last for many hours, traveling hundreds of miles from where they began. This phenomenon is known as a derecho, which is a Spanish word meaning “straight”. Straight-line winds such as those mentioned above can cause extensive tree damage, potentially blocking roadways and knocking down power lines.

A microburst is a more localized phenomenon, which also occurs within thunderstorms, but may also occur in heavier rain showers not associated with a thunderstorm. A thin shaft of rain-cooled air drops out of the clouds at high speeds. When this air hits the ground, it spreads out in all directions, causing strong wind gusts blowing in vastly different directions within a small area. Microbursts are particularly dangerous to aircraft flying at low elevation, such as those attempting to land (or take off) at an airport. Most airports now have wind-shear detection systems installed and will shut down temporarily when wind direction or speed varies too greatly from one side of an airport or runway to the other.

We mentioned many examples above where thunderstorms can cause damaging winds, however notable and potentially dangerous wind events do not necessarily require a thunderstorm. Deep low-pressure systems can create large areas of strong gusty winds due to their large pressure gradients. These larger-scale wind patterns can be strong enough to cause damage, particularly in areas with few trees, those near large bodies of water, or in areas where terrain creates a funneling effect. One such area where terrain funnels the wind is along I-90 near Livingston, MT. The freeway passes through a narrow canyon where winds from a southwesterly (or northeasterly) direction are forced to converge and therefore accelerate. High winds are so frequent here that the Montana Department of Transportation has installed warning signs and windsocks along this stretch of road to ensure motorists are alerted to the presence of dangerous crosswinds.

Speaking of terrain, the next few examples are all driven, at least in part, by terrain features. In general, the higher you climb above sea level, the stronger the winds are. This is due to decreased friction, as the wind is not blowing over the “rough” surface of the earth for long distances. Sherman Summit lies between Cheyenne and Laramie, Wyoming. At 8,640 feet, it is the highest point along the entire length of I-80. Truck traffic can be in danger of being blown over by the strong winds that frequent this stretch of the important transcontinental shipping route. During the winter, this stretch of road is often closed due to strong winds causing blowing snow and low visibility.

Along nearby I-25 between Cheyenne and Wheatland, strong winds can also be observed at times, in this case due to downslope acceleration. Westerly and southwesterly winds blowing over the Laramie Mountain Range plunge around 7,000 feet over a distance of just 25 miles, causing the winds to accelerate. These strong winds blowing perpendicular to the north-south oriented interstate highway can cause vehicles towing trailers to lose control and crash, or lose their loads, creating hazards for other drivers. As a result, trailer traffic is restricted along the route on days when strong crosswinds are expected.

The infamous Santa Ana winds (also known as devil winds) are a geographically specific form of downsloping winds that occur in the canyons of the San Gabriel Mountains in southern California, usually during autumn. High-pressure systems that develop over the Mojave Desert force warm dry air southwest over the mountains and down into the San Fernando Valley and Los Angeles Basin. Wind speeds can increase further when low-pressure systems set up off the California coast. As the winds move down the southwestern slopes of the San Gabriel Mountains, the air is compressed, causing the temperature to rise and the relative humidity to decrease. The hot, dry winds create conditions where fires can easily ignite by drying vegetation and can also lead to dangerous fire behaviour including rapid fire growth and spread. Wildfires can create hazards for motorists by reducing visibility and making roads impassable due to high radiant heat and/or physically blocking them with fallen trees and debris. Extra vigilance is required during Santa Ana wind conditions to keep motorists out of harm’s way, as roads that were considered safe can rapidly become unsafe. During extreme fire danger conditions, any maintenance activities that could potentially create sparks, especially mowing and brush clearing operations, should be suspended to prevent wildfire ignition.

In the desert southwest, strong winds due to an approaching cold front or outflow from a dry thunderstorm, along with an abundance of loose sand and dust, can lead to a phenomenon known as a haboob. Haboob is an Arabic word meaning “blasting” or “drifting”. A haboob is a large cloud of dust and fine sand lifted by the wind. Haboobs can quickly reduce visibility to near zero when they pass over an area, leading to extremely dangerous driving conditions. Driving in a haboob is so dangerous that the Arizona Department of Transportation recommends pulling off the road as soon as possible, stopping and turning off all lights. Turning off the lights will prevent other motorists from mistaking the stopped vehicle for a vehicle travelling on the road and either colliding with the vehicle or unknowingly leaving the roadway.

While tornadoes are certainly dramatic and devastating, other wind events can also have a great impact on travel and roadway maintenance. Straight-line winds, terrain-induced winds and haboobs all present hazardous situations on the road. Paying careful attention to developing wind conditions will help travelers stay safe during these severe non-tornadic weather events.