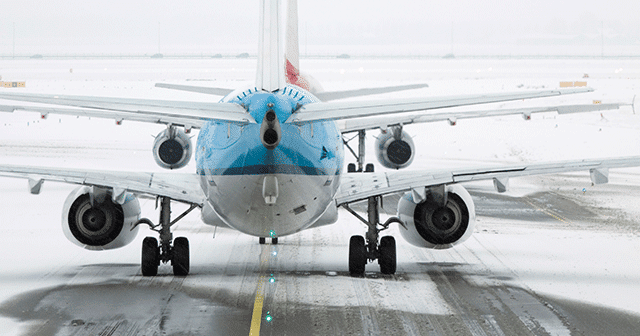 This article will take a look at how ice formation affects an airplane’s ability to fly. Then, it will explain the different types of ice that pose a threat and how these can affect your plane. Finally, it will briefly cover what anti-icing systems and anti-icing products can do.

For airlines, maintaining passenger safety is of utmost importance, so winter weather conditions bring a variety of challenges. For example, unnecessary de-icing and anti-icing of aircraft costs time and money. Failure to predict when de-icing is truly required can lead to safety risks, delayed flights, and even cancellations. To help airports and airlines maneuver around these crucial decisions, DTN developed Aircraft IceGuard.

In line with these factors, the threat is higher if the plane has thinner wings and is flying at high speed. The threat is also increased if you pass through a cloud and encounter large droplets with a high liquid water concentration.

Icing conditions can vary in intensity from light to heavy. If the conditions are severe, anti-icing systems may not be sufficient to control the situation. The required course of action for your pilot may depend on the application rate or the rate of accretion (how fast the ice builds up). The type of ice also makes a difference.

Frost can cover the airplane surface when it forms in clear air by the process of deposition. Frosting can occur when a plane enters warmer and more humid air conditions on descent. Planes that remain standing outside overnight in cold and clear conditions will have a covering of frost by morning. Frozen dew can also form in similar circumstances when temperatures are just below freezing.

As part of your de-icing protocols, removing both frost and frozen dew before take-off is essential because these can change the aircraft’s aerodynamic properties. For example, airflow over the wing can be sufficiently affected so lift is reduced and the stall speed is increased.

The entire water droplet that forms rime ice will freeze instantly on impact. However, because the droplets do not spread out, they keep their shape and create air pockets between the frozen particles resulting in an irregular mass.

Although the resulting mass is not heavy, it can alter the aerodynamics of the wing camber. It can also block the openings of critical instruments. On the other hand, rime ice can be removed quite easily by de-icing systems.

Clear ice is the most dangerous kind. It can form when flying through cumuliform clouds or freezing rain. Clear ice spreads over the surface of the tail and wings, creating a solid glass-like sheet. Since there are no pockets of air, the structure remains strong.

The structure of the ice can extend beyond and in front of the wing, critically affecting the aerodynamics. This type of ice accumulation will seriously disrupt the airflow and can increase drag by several hundred percent.

Clear ice is dangerous for flight because it can lead to:

When mixed with snow or sleet, clear ice may have a whitish appearance. When rime and clear ice form at the same time, this is known as mixed ice.

How icing affects the plane

When ice builds up on a plane, it negatively affects many of the aircraft’s working parts. Ice not only impacts parts of the plane’s structure and apparatus like wings and propellers, but it also affects other sundry items, including critical elements like windscreens, antennas, pitot tubes, carburetors, etc.

Planes with turbine engines face a particular challenge with ice buildup. This is because the inlet ducts of the engines are susceptible. When ice gets into these areas, there is a real danger that the airflow through the engine gets restricted, and this can at best affect performance and at worst cause the engine to malfunction.

The first parts of the aircraft to be affected by ice are not the wings but those parts with a narrow edge like propeller blades etc. Necessary instruments that are exceptionally delicate, like the temperature gauge, are particularly vulnerable. Even something as fundamental as the view from the windscreen being obscured at a crucial moment can be a serious threat to safety.

Newer planes benefit from systems that are designed to protect an aircraft in an ice emergency. In addition, many planes are now equipped with anti-icing or de-icing systems. These systems fall into three broad categories as follows:

Rubber “boots” are fitted to the plane’s leading edges. These are made to expand and contract to break up the accumulating ice rapidly.

Susceptible areas of the plane are heated to stop the buildup of ice. Hot air is diverted from the engine and fed through ducts to critical areas. Electrically heated coils protect other vital components.

Antifreeze fluids are directed through tubes to chemically break up the ice forming in vulnerable areas such as propellers and wing surfaces.

Snow and ice can pose challenges to flight safety. It can also impact the smooth running of your operations. Unnecessary de-icing and anti-icing of aircraft cost you time and money. Failure to predict when de-icing is required correctly can lead to safety risks, flight delays, and even cancellations.

Aircraft IceGuard from DTN supports your de-icing decision-making by combining weather observations and forecasts with wing temperature measurements and projections.

This combination of observations and forecasts allows you to plan for icy conditions more efficiently, helping you increase safety and reduce transfer times.