You may have spring fever. You may be ready for grass to turn green and flowers to bloom. But, are you prepared for the threat of severe weather this spring?

The Storm Prediction Center (SPC) and the National Severe Storms Laboratory (NSSL) evaluated the probability of severe weather throughout the year for a 30-year period from 1982-2011. This historical data illustrates what many of us already know, the risk of severe weather increases over the Lower Mississippi Valley and Deep South during early March. The threat of severe weather then becomes greater and spreads northward into the Southern Plains by early April. The typical April ‘hotbed’ for severe weather becomes Oklahoma, but the majority of the central and eastern U.S. also have an increased risk of severe weather by that point in the year. 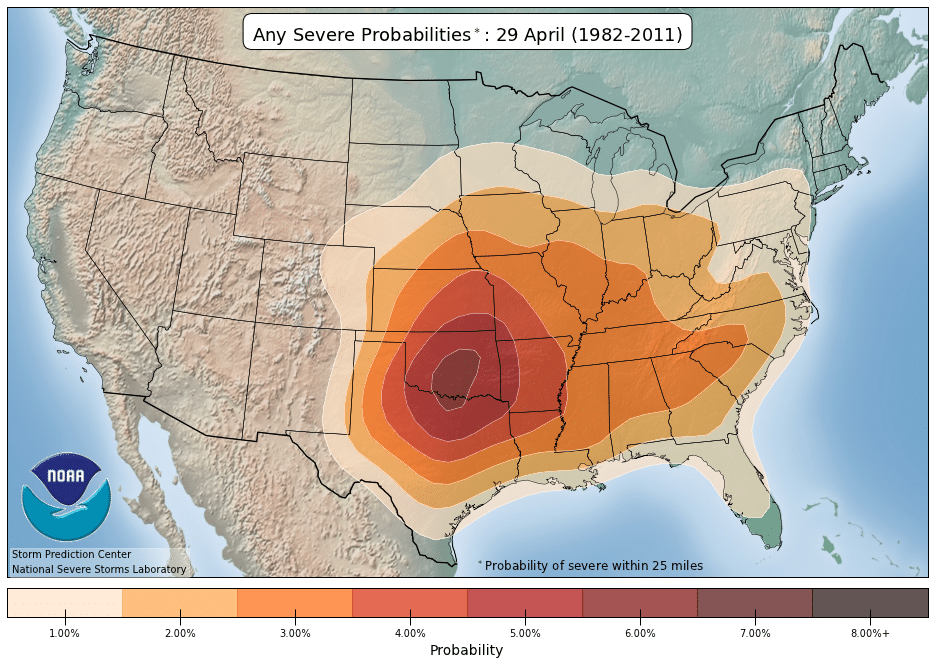 During May, the heightened risk of severe weather continues to expand northeastward across the Ohio Valley and into the Carolinas. The higher probabilities continue to spread north and east through early summer, while the threat farther to the south slowly decreases.

One of the most worrisome forms of severe weather, tornadoes, occur at a higher frequency in the Great Plains where thunderstorm development is influenced by the dry line. The dry line separates dry air to the west from moist air surging northward from the Gulf of Mexico and Caribbean. Dry lines over the southern Plains help to provide the lift needed to cause severe thunderstorms to develop. The probability of a significant tornado (EF2 or higher) is greatest across Oklahoma, the Lower Mississippi Valley, and northern Alabama during April, and this risk typically becomes more concentrated across the Plains – “tornado alley” – during May.

As we look ahead to spring 2018, temperatures are forecast to be above average across the southwestern U.S. and Southern Plains, while below average temperatures are expected over portions of the Northern Plains into western Canada. The northward position of the jet stream will allow moisture to stream northward from the Gulf of Mexico, providing fuel for thunderstorms and potentially enhancing severe weather activity over the Southern Plains and Mississippi and Tennessee River Valleys. A late season snow storm can also not be ruled out over the far Northern Plains.

One of the factors driving this spring’s forecast is La Niña. La Niña conditions have been in place through this winter and that typically favors an earlier peak in severe weather season (April) and potential for a higher frequency of tornadoes. During the 2017-2018 La Niña winter, drought developed across the southern U.S, and extreme drought continues across portions of the southwestern U.S., the Texas Panhandle, and western Oklahoma. These drought conditions may cause an eastward shift in the dry line, bringing storm initiation and the risk for tornadoes closer to highly populated areas like Oklahoma City and Dallas.

WDT’s WeatherOps services provide you with a timely heads up for potential severe weather. Give these services a try to ensure you’re well-prepared this season: