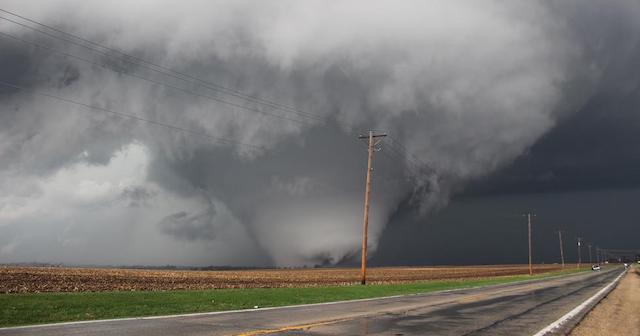 While most people consider March 20 to officially be the first day of spring because of its coincidence with the spring equinox, for the more meteorologically inclined spring has already begun. Unlike astronomical spring, meteorological spring, which is based on the annual temperature cycle and includes March, April and May, started promptly on March 1.

But regardless of which date you consider to be the first day of spring, the perception of the transitional season as nothing but sunshine and budding flowers doesn’t tell the whole story. So here are our three reasons why you shouldn’t underestimate the severity of springtime weather, as well as some insight into exactly why these extreme weather events happen.

With winter coming to an end, temperatures start warming as summer approaches. Storm chasers might warn you to be careful what you wish for, however, as the atmosphere can become extremely restless as a result of this annual ritual of warming driving out the cold. This creates an open invitation for dangerous storms to bubble up frequently and with very little warning.

In reference to spring thunderstorms, Mark Twain once said: “In the spring I have counted one hundred and thirty-six kinds of weather inside of four and twenty hours.” We know how he felt. By far the most common restless weather we encounter during springtime is thunderstorms, which can be counted on to occur but remain somewhat unpredictable in terms of where they will hit.

With thunderstorm formation, the intensity varies depending on how stable the atmosphere is and the rate at which the warm pockets of air rise and condense. The intensity of these storms can range from brief, scattered single-cell thunderstorms to a large-scale, tornado-producing supercell. As the days get longer and the warmth from the sun heats up the ground, this warmth rises and cools in the atmosphere to form condensation, or clouds. This warm air eventually rises in an unstable atmosphere, pushing cold air out of the way.

If the atmosphere remains unstable, and these pockets of warm, condensing air rise rapidly, we have the recipe for a thunderstorm.

2. Tornadoes Are Now In Season

Though this next severe weather type may impact a smaller footprint of the landscape, its devastation can be swift. In the midwest of the US, most people are familiar with and have a healthy fear of tornadoes.

Tornadoes are common during springtime in the US as air of different temperatures combine, leading to 1,169 preliminary reports of tornadoes in 2018 alone. Fortunately, most tornadoes are small and don’t cause much damage, but a handful of tornadoes every year are strong enough to level entire neighborhoods.

Perhaps one of the most dangerous things about a tornado is that you can’t always see it coming. We are familiar with the traditional funnel cloud that is often shown in movies and in news footage of the developing storm because of the condensation in the clouds or the debris that is picked up. However, as the tornado starts to form, the condensation funnel may not yet have developed and it hasn’t reached the ground to pick up the debris, making it hard to spot until it’s too late and the tornado is too close for comfort.

With these severe storms come a cascade of dangerous events, from high winds that can tip over large semi trucks, heavy rain, hail and even severe flooding.

Each storm has its own unique make-up of elements that contribute to the risk of property damage and physical injury, but the best way to help mitigate the extent of damage during these events is proper preparation.

It’s not all doom and gloom, however. Fortunately there are meteorologists around the country who are dedicated to predicting and mitigating the damage of extreme weather events. Here is how they gauge risk and communicate with the public:

Weather centers around the country are incredibly active during the spring as they determine the potential for severe weather. The risk for severe weather is conveyed using a five-category scale that ranges in severity from marginal risk to high risk.

With this information they are able to communicate to communities how dangerous the potential developing storm could be. This amount of risk can change over time so it is important to check frequently for any updates on the conditions of the developing storm.

During the early stages of severe weather development, a “watch” may be communicated out.  A watch means that conditions are favorable for dangerous thunderstorms, tornadoes or flooding to develop over the next couple of hours. Once a watch is issued, the public should keep an eye out for urgent weather updates and check frequently. If conditions eventually culminate into actual severe weather, a “warning” may be communicated out, indicating that the severe weather has been spotted in the area and the certain locations may be in the direct or adjacent path of the storm.

Because of spring severe weather unpredictability the area of concern for the warning may be larger than the actual storm pattern to account for the change in direction or severity from the wind or geography.

Regardless of the alert, it is advised that you have safety plans in place to seek shelter and secure belongings in the event of a storm. Securing belongings is crucial in minimizing the risk of debris becoming missiles that cause even greater damage and injury.

The good news, however, is that while extreme weather is likely to occur, the weather is warming up and the blue skies of summer are on the way, with the promise of a more stable atmosphere, and less hot air and cold air extremes.

Springtime is largely perceived to be a joyous, transitional season best depicted by blooming flowers and sunny weather. But ask any meteorologist and they’ll be sure to warn you how common extreme weather events – including thunderstorms, tornados and flooding – are expected as a result of cold winter temperatures warming and creating a restless atmosphere.