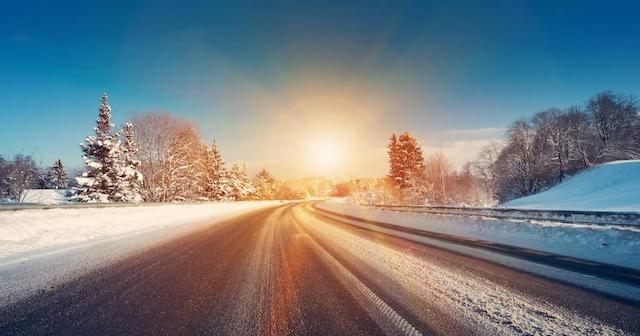 It’s late February and the heaviest snow storm of the season has just dumped a foot of snow in your area. Road maintenance crews have cleared much of the snow from public roads and your favorite TV meteorologist is forecasting abundant sunshine, albeit amidst frigid temperatures and brisk winds, for the next few days.

To the untrained eye, it might seem like maintenance crews can be sent home for some well-deserved rest, but more knowledgeable operators will know full well that these conditions are perfect for blow ice and will keep some crews standing by in case the roads become dangerous again.

But what exactly is blow ice and why is it hazardous?

What is Blow Ice?

Blow ice occurs when loose snow blows onto the roadway and melts. Melted snow can then freeze to the pavement, creating a thin layer of ice on the road. That previously clear road now has a dangerous layer of ice on top of it. But blowing snow does not always lead to blow ice. For blow ice to develop, blowing snow must occur in conjunction with one of two conditions.

The first condition often occurs later in the winter season and is related to the increasing sun angle. As spring nears, the sun’s angle increases in the northern hemisphere, resulting in more of the sun’s energy reaching Earth’s surface. More energy reaching the surface means more energy can be absorbed by pavements, leading to warmer pavement temperatures. Since pavements heat up quicker than the air, it is common for pavement temperatures in late winter to be above freezing while air temperatures remain below freezing. Assuming this scenario occurs, air temperatures below freezing allow the new-fallen snow to blow. As snow blows onto the warm road, it melts. When pavement temperatures cool due to evaporational cooling or a decrease in solar energy, any lingering moisture on the road will freeze into a layer of ice, resulting in blow ice. 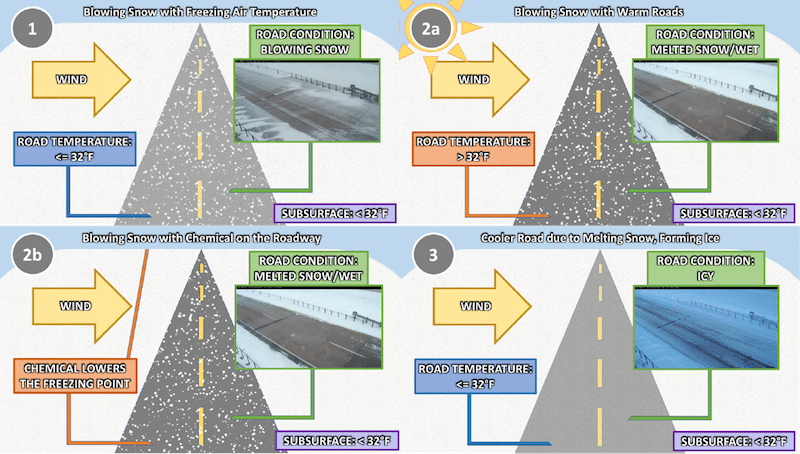 The second method for blow ice to develop results from chemical applications on the roadway. Chemicals applied to the pavement typically melt snow by reducing the freezing point of the road. In other words, applying chemical makes it possible for roads to remain wet, rather than icy, with temperatures below freezing. When blowing snow lands on a chemically treated road, it will initially melt. If enough blowing snow melts on the chemically treated road, the chemical will eventually become diluted, resulting in decreased effectiveness. As the chemical becomes less effective, the road’s freezing point will begin to inch closer to the standard 32ºF. Any water that remains on the road as the road’s freezing point increases will begin to freeze into a layer of ice known as blow ice. However, unlike the first method for blow ice to form, this formation method can occur at any time of day and at any time in the season.

It’s important to remember the danger that blow ice presents. That thin layer of ice will be difficult to see, especially after dark. What appears to be a clear road has the potential to be a slippery hazard. As such, close monitoring of pavement and weather conditions is key to maintaining road safety throughout the winter season.