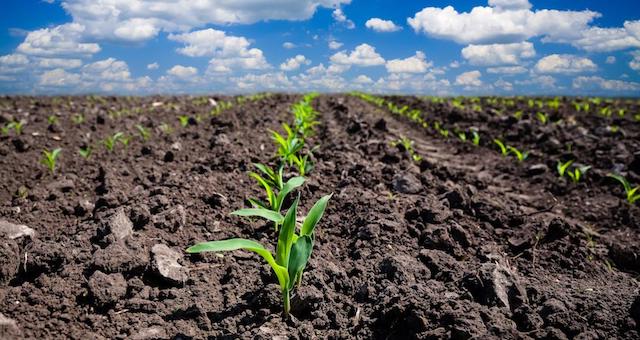 With the vernal equinox now behind us, spring has officially arrived in the astronomical sense. For much of the U.S. corn belt, however, it may still be at least a few weeks before the weather actually feels like spring. Cold and/or wet weather during this time of year has a tendency to make the agricultural commodity markets nervous, for fear that delayed planting will result in reduced crop yields (particularly for corn).

The impacts of planting date on corn yields have been widely studied, resulting in a general consensus that – all else being equal – corn planted later yields less. It is worth noting, however, that many such studies involve planting corn in the same location, across a range of dates, and then measuring the final yield for each planting date. The phrase “all else being equal” certainly applies in such studies. While the idea that a late spring will result in reduced yields might seem like the logical extension, reality might not be quite so simple.

It is typically assumed that corn seeds require a soil temperature of 50 F or higher in order to germinate. As such, planting is often delayed until soil temperatures warm to this level, so as to reduce the risks and stresses associated with delayed germination. While not a perfect reflection of when the bulk of the crop is actually planted, the date on which the average soil temperatures reach the 50 F threshold would therefore seem to be a reasonable indicator of when planting might begin in any given location during any given spring. For reference, Figure 1 provides an indication of when this threshold is normally reached (median date) for the major corn-producing counties of the U.S. The counties that are depicted typically produce 90% of the U.S. corn crop. 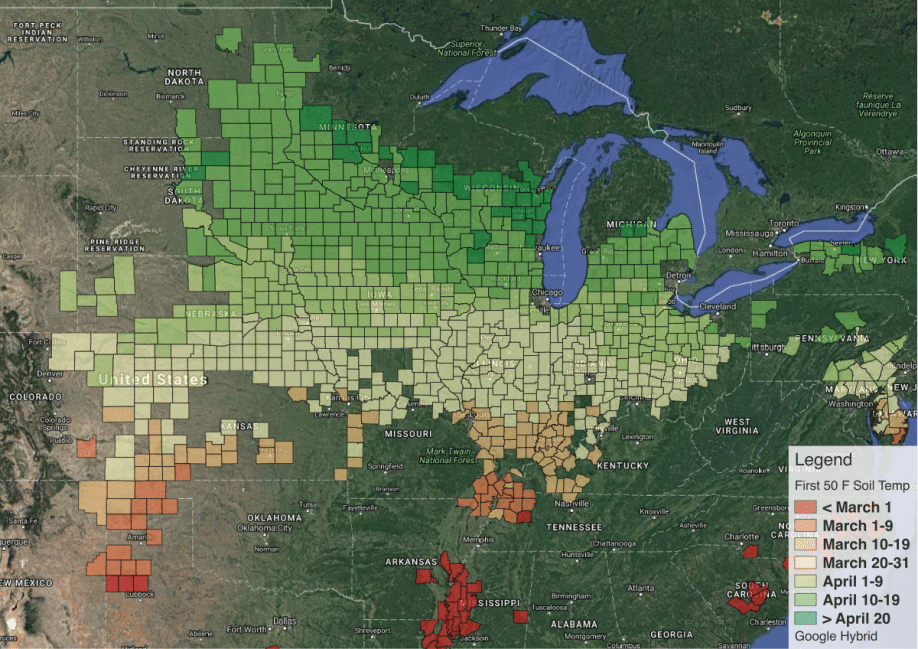 Figure 1: The median date on which daily-averaged soil temperatures first reach 50 F for the major corn producing counties of the central United States.

Of course, Mother Nature will always do her best to serve up surprises, such that ‘normal’ typically doesn’t mean much when it comes to weather. The question we wish to answer first is whether either earlier- or later-arriving warmth during the spring has any tangible impact on corn yields. Toward this end, we can access county-level historical corn yield data from the USDA National Agricultural Statistics Service (NASS), and look for correlations between these county-level annual yields and the dates on which the 50 F average soil temperature threshold was first reached in each of those counties during each of those years. With respect to the former, given the steady increase in corn yields over time, it is necessary to remove the effect of these upward trends from the county yield data before calculating any correlations. With respect to the latter, this information is available through the ClearAg Soil Conditions API service, which extracts data from high-resolution grids of simulated historical soil temperature and moisture, for the 1980-2017 timeframe. Combining the two data sources, we can look for correlations between the timing of warming spring soil temperatures and the corresponding fall corn yields, over the 1980-2017 timeframe, for each major corn-producing county. The results of this analysis are depicted in Figure 2. Note that the years with the earliest and latest dates, and the lowest and highest yields, were excluded from the correlation calculations underlying Figure 2, in order to limit the impacts of years that are significant outliers with respect to either. However, the patterns still look quite similar even if this step is not taken (not shown). 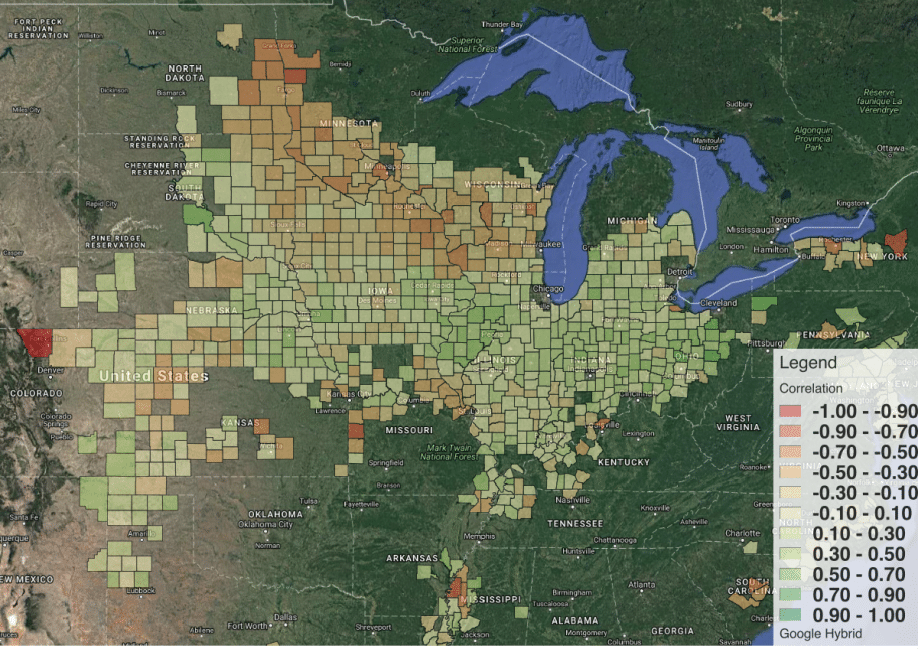 An obvious question with respect to the approach that was taken above is whether or not using the timing of when daily average soil temperatures first reach 50 F is a reasonable indicator of the earliness or lateness of spring planting. Certainly moisture also plays a role in determining when planting starts, as does the risk of the crop being hit by a late-season frost if planted too early. While county-level information with respect to actual planting progress in any given year is not available through the USDA, the USDA’s Crop Progress Reports do provide state-level information for the major corn-producing states. These weekly reports are available back to the year 2000 (as opposed to 1980 in the exercise above). During the spring, these reports provide an indicator of the cumulative percentage of the corn crop that has been planted in each of the major corn producing states. Interpolation between these weekly percentages can provide a good estimate of the median planting date in any given spring (i.e., the date by which 50% of the crop had been planted). Using these dates, and (detrended) state-level historical corn yield data from the USDA, it is possible to recalculate the correlation between planting dates and corn yields, this time on a state level. These correlation coefficients are provided in Table 1. Note that a second set of correlation coefficients (shown in parentheses) were calculated after throwing out the years with the lowest and highest yield in the 2000-2017 timeframe, so as to help minimize the impact of the outlier years in the calculated values. 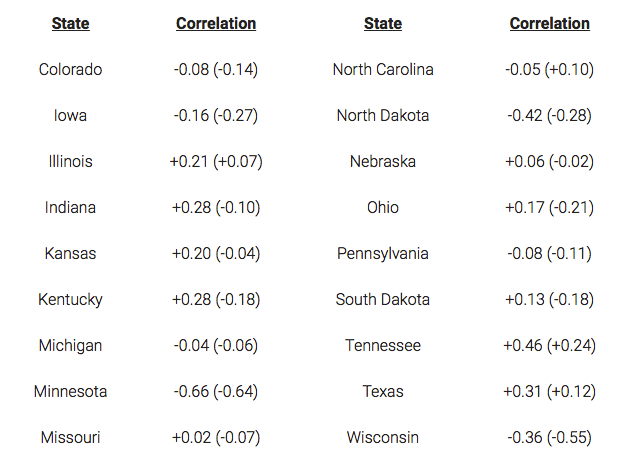 Though there are states in which the correlation coefficients as calculated with all years included differ in sign from those calculated with the years of the highest and lowest yield excluded, the general pattern in Table 1 looks much the same as in Figure 1. The states of Minnesota, Wisconsin, North Dakota and Iowa all exhibit negative correlation coefficients, regardless of which approach is used. This indicates that later planting in these states is indeed associated with lower corn yields. This is the same general area where this pattern was evident in the county-level data of Figure 2, where the analysis was performed using soil temperatures instead of actual planting dates. LIkewise, the eastern Corn Belt states generally either show both correlation coefficients being near to zero, or on opposing sides of zero, indicating that the pattern of late planting leading to lower yields does not seem to apply there.

The Case of Minnesota

As one point of reference, Minnesota appears to show strong negative correlations using both of the approaches above. Figure 3 provides the annual median planting dates (day of the year), yields and detrended yields for the state of Minnesota. Comparing the planting dates in Figure 3 against the detrended yields, it is immediately apparent that the five years with particularly late planting dates (2001, 2008, 2011, 2013 and 2014) all exhibited average to below-average yields, and are likely a substantial part of the reason for the negative correlations found for Minnesota in the exercises above. Contrarily, early planting does not appear to lead a significant yield bump. Rather, so long as the planting date is ‘normal’ or earlier, there appears to be little or no correlation between planting date and yield. (It must be noted that these patterns might be different in other states, however.) 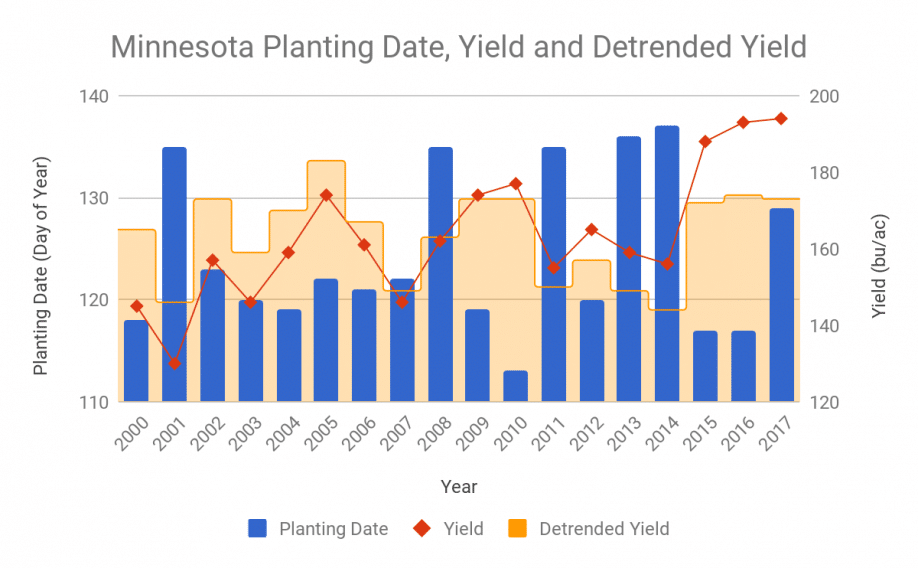 Figure 3: Median planting dates, yields, and detrended yields for the state of Minnesota for the years 2000 to 2017

In summary, the data examined in this brief study generally seem to call into question the widely held belief that late planting results in reduced yields. Though there exists a corridor across the northwestern Corn Belt in which there appears to be some truth to this belief, there are as many other corn growing areas where there is no discernible relationship, or even an inverse relationship, such that when taken on the whole there is very little correlation between planting date and the ultimate yield of the U.S. corn crop.

This isn’t necessarily the end of the story. It is possible that late planting does indeed lead to lower yields in a broader area, but that early planting comes with equal or greater risks, such that the impact of late planting gets concealed by these other factors in the correlation calculations.