Does the temperature affect the crime rate? Are more crimes committed when it is hot out and less when it is cold? Let’s look at what the data show.

He is steaming mad. She let her temper flare. They are simmering with anger. The team’s frustration is boiling over. Our language matches heat with negative emotions frequently. How does this compare to real crime rates? There have been numerous studies to see what the actual connection is between hot temperatures and violence.

Statistics can be a messy field as many claim people can make numbers say anything they want. For instance, it was recently reported that the rise in ice cream sales correlated with an increase in homicides. Unless ice cream trucks are murdering people, then this correlation is just a coincidence. After all, correlation doesn’t always equal causation.

What do you do when the weather is warm? Many people head outside to enjoy the day. I’ve noticed more people out riding bikes, jogging, and walking dogs when the temperature is pleasant. Parks are crowded, festivals and parades occur, and outdoor music festivals happen during the late spring and early summer months.

Data show that it isn’t necessarily that more crimes are linked with the summer. The connection is the warm weather in general, no matter what time of year. A lot of data are available for Chicago, so let’s look at some graphs focusing on the third largest city in the U.S.

The above graphs are for assault and battery. While there are some peaks in cold temperatures, there is a steady incline in these crimes as the temperature climbs. Eventually, it gets too hot, and no one wants to be outside. But what about less violent types of crimes, like arrests for drugs or stalking? 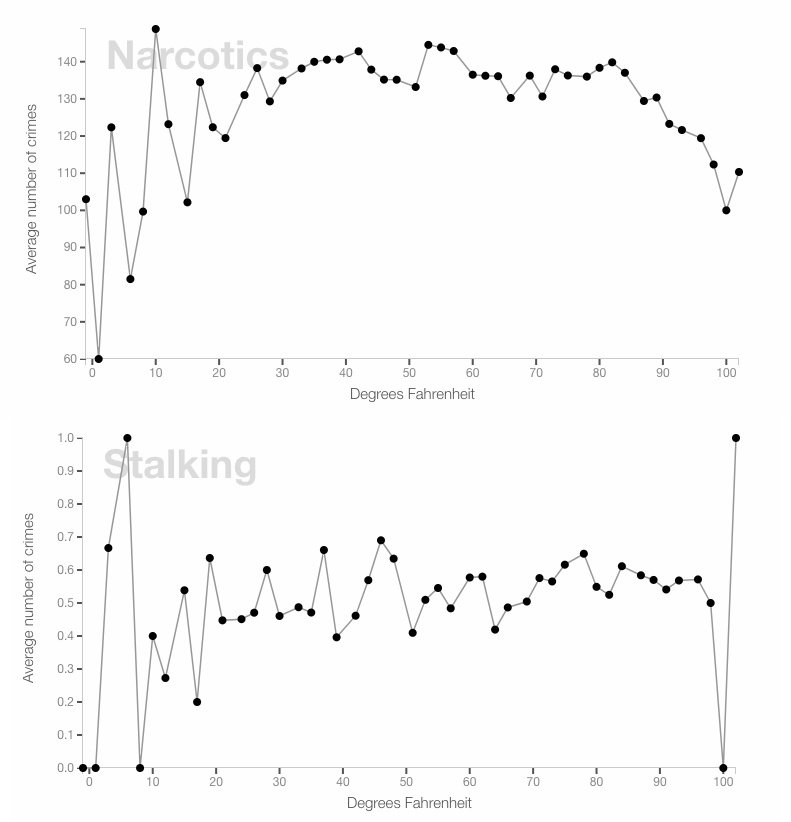 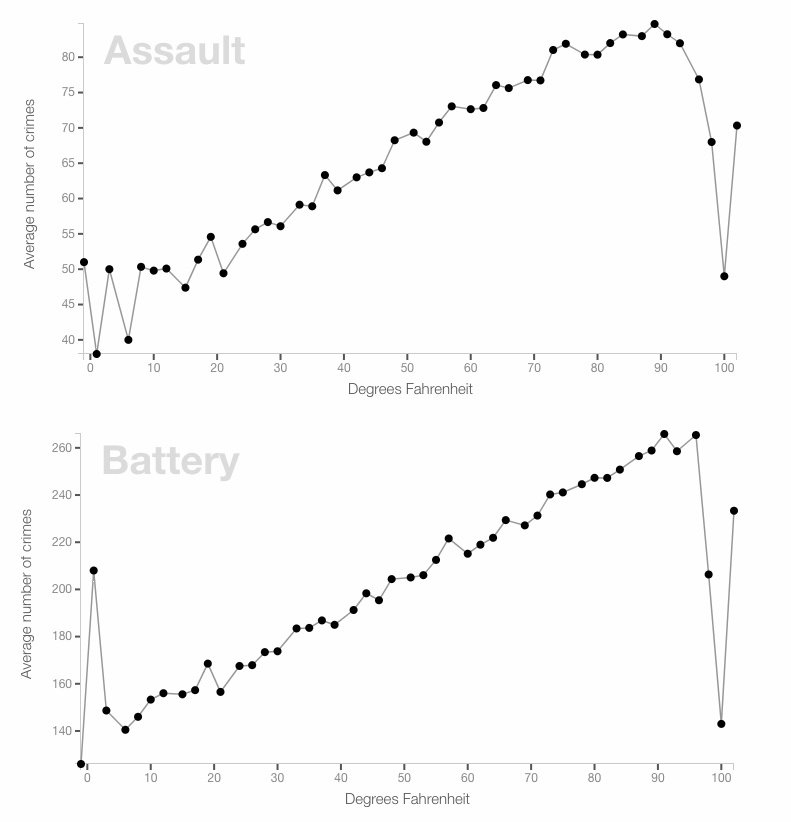 Again, we see many peaks and dips within the data. The correlation with hotter temperatures is less apparent. These appear to be crimes that can happen any time of year.

Does violence slow down in colder weather? In 2015, record-breaking cold temperatures were measured across the eastern portion of the country. During this period, New York City had a 12-day span without a homicide, the longest since the police started to keep track in 1994. In Boston, major crimes dropped 34% after experiencing over 6-feet of snow in the area. Many large cities in the area saw a decrease in criminal activity, the only one that rose was car theft as people left vehicles running to warm up. 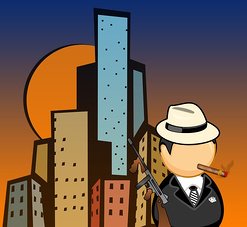 Now, you may be asking “what about the crime rate in cities that are almost always warm?” A study was done in Dallas about whether temperature related to violent crimes. Their results showed a relationship was relevant to an increase in temperature, became more moderate after 80°F and then a negative correlation showed up after 90°F.  The conclusion was that as it became hotter outside, people went inside to cooler environments and that crimes of opportunity decreased.  Again, our language matches decreasing temperature with calming down, because here people literally “cool off” or “chill out.”

The weather doesn’t cause crime, of course. It is people’s actions that lead to violence. Are there other reasons for this increase? There could be more police on patrol in the summer to catch the criminals. Another reason for the increase could just be that there are more chances with the population increasing outdoors. However, many of these studies were done with climate change in mind. With the temperature of the planet expected to rise over the coming decades, will crime also rise? While many countries have air-conditioning, third world ones don’t have this advantage. An increase in temperature can also be linked to famine. Will these areas experience more wars as their environments heat up? Only time will tell.