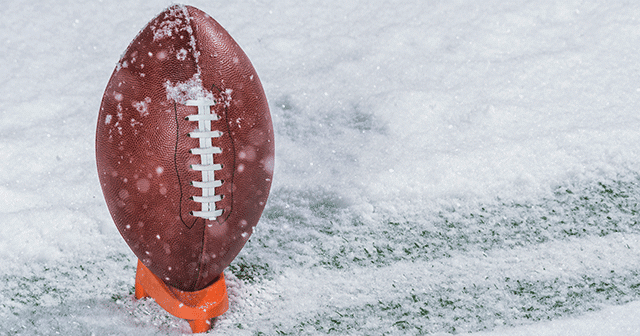 Game time was fast approaching. Should the club hold the game or cancel it for inclement weather? The best weather report they could find showed there was a chance the cold weather would shift more to the north. Not wanting to disappoint the fans, management made the decision, game on!

But an hour and a half into the game, shivering fans in the stands, and turf conditions tell otherwise. The temperature was dropping quickly, and the field was turning icy.

The quarterback threw the ball. An exciting new up-and-coming wide receiver leaps to make contact and run. But as he lands, the slippery icy turf slides out from under him, and he goes down, unable to get back up. The cartilage and ligaments in his right knee are torn.

At the end of the game, all go home bone-cold, a little miserable, and the once exciting up-and-coming star player has probably just played his last college game.

When management makes decisions with unreliable information, so much is held at risk. However, when the decision-makers have the best technology at DTN WeatherSentry Sports Edition available to them, it protects so much more than the optics of one game. It also safeguards a college’s reputation for looking after its own, the loyal fans, and players.

The challenges of college football games in severe weather

Any sport played at a higher level presents a significant challenge to the body, but this proves especially true with the high intensity of football. Coaching staff and trainers work tirelessly to keep players in optimum playing condition and health. When the weather becomes a factor, all of these things become exacerbated.

A study carried out by the Journal of Athletic Training noted the potential impact Exertional Heat Illness had on players within the first 14 days of preseason practice. Serious illnesses included heat cramps, heat syncope, heat exhaustion, exertional heat stroke, and exertional heat hyponatremia. In addition, it has a serious impact on the heart and respiratory system, potentially leaving players affected and underperforming.

While it is easier to adapt and train in consistently higher heat conditions, it is much harder for teams to adapt when traveling on away games. Difficulty adapting also proves true for games held in places where the temperature drops unexpectedly.

The cold can hinder reaction times, make muscles stiffer and more prone to injury, place increased strain on the heart and lungs. Warm bodies out in the cold may also suffer from frostbite or hypothermia when not adequately protected.

While the coaching and training staff work hard to help their players acclimatize to their home training environment, it proves much harder to do at away games. Making sure the training and coaching staff have the most accurate weather forecasts as early as possible helps them prepare, plan and pack appropriately for the weather the team can expect while they are on the road.

How weather affects the field condition of college football games

When weather and temperatures are moderate and clear skies shine above the stadium, it is easy to forget the bad weather days. However, with the increase of storms, hurricanes, and severe weather, bad weather days are turning more serious, and management needs to have contingency plans.

As a result, the traditional idea of playing through the weather, though fun, and adding a challenging element to the game, now carries more added risk.

Most college football stadiums are built to withstand huge crowds and adverse weather. But with most of them being open-air, they are open to risk. A lightning storm, heavy rainfall, and sudden blizzards will make most stadiums unplayable. Therefore, keeping turf conditions in optimum shape is critical.

When unexpected weather leaves stadium staff scrambling to save the field for the game, it distracts from preparing the team and welcoming the fans. The most significant risk, though, is to the players. Wet or icy field conditions are a recipe for disaster and increase the probability of serious injuries.

Teams invest vast amounts of time and money into their players. The players are one of their most significant investments, with thousands of hours and dollars spent scouting and recruiting potential stars with players and management hoping for a long career ahead of them. Unfortunately, one bad fall because of field conditions can wipe out years of invested training and coaching.

Having reliable weather data and analysis can provide your club with the detailed information it needs to protect its investments and stand by its people, ensuring everyone can enjoy the game and play.

When the whole club is well prepared and focused, it reflects in the team on the field. Loyalty breeds success. The best games come from the best planning, talent, and heart.

There is also the legal aspect to consider. Suppose games are held in weather that turns severe such as an unexpected thunder and lightning storm or heavier than expected rainstorm. It puts the fans in the stands and the teams at risk.

While everyone enjoys healthy competition and seeing how the away team handles the change of environment, no one wants to see a team bus in danger because of floodwaters or tornadoes. Likewise, reports of fans killed on the way home because of severe snow squalls or stranded at the stadium because of rising water would be a heavy burden on anyone who made that decision.

As the weather becomes more unpredictable, management needs more trusted resources to rely on, as their decisions impact tens of thousands of people. But, if they decide that puts others in danger, they could be leaving themselves open to liability lawsuits and bad press.

The most accurate weather and analysis available

When your weather data source information is more accurate than the traditional sources, your club can anticipate and prepare. DTN WeatherSentry Sports Edition gives you access to the most precise weather data and turns that data into actionable insights to help you make confident decisions.

We also have teams of scientists, meteorologists, and analysts working to make sure the data you receive is accurately interpreted. Due to our state-of-the-art technology and expertise, you are provided with trusted, reliable information to make the best decisions for your team.

By supporting you in preparing your team ahead of the competition with the earliest accurate weather forecasts possible, your team can start conditioning for sudden weather changes. As well as prepare the stadium field properly before the game, so your players are not exposed to unanticipated risk.

Contact us here at DTN WeatherSentry Sports Edition to see how we can improve your game performance. All the while keeping an eye on making sure fans are safe during the game and while traveling. We would love to hear from you and show you why we are at the top of our game in our field.