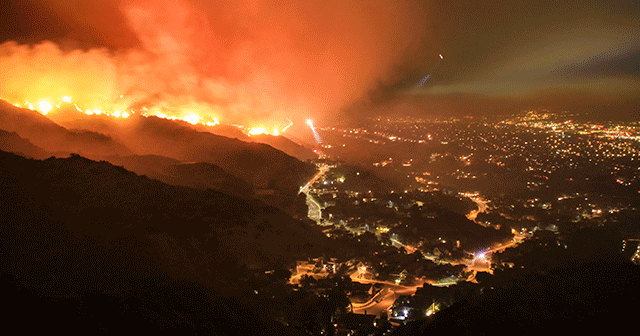 It is less than two months into the new year, and California has already experienced nearly four times the number of wildfires as the same time last year. Warm winter weather, strong winds and dry vegetation are to blame for the recent outbreak. Wildfires are increasing–in frequency, intensity, and length of season. What was once a four-month high-alert season, July to October, has now blended into a year-round risk.

Not only do wildfires threaten public safety, houses, and infrastructure, but it also creates additional risk for utility companies. Wildfires can be ignited by utility infrastructure, such as power lines or nearby aerial communication facilities, as was the case for PG&E and Camp Fire. Or, it can cause utility companies to shut off power to millions of customers to prevent fueling existing fires. The recent Santa Cruz fires required local utilities to perform “public safety shutoffs” for thousands of customers. Wildfire risk mitigation has become integral to operations management. Forecasting for fire risk and advanced technology are critical for confident risk mitigation decisions.

For preventative measures, fire weather forecasting uses atmospheric conditions to evaluate wildfire risk. Air temperature, humidity, wind levels and even timing are factors in the intensity, spread and behavior of fires. For example, fire weather conditions usually peak during the early afternoon when temperatures are typically their highest, wind speed will be at its maximum and most variable; and the relative humidity is generally at its lowest.  Rapid fire growth potential in the late morning is especially dangerous and fire crews rely on accurate forecasts to manage response efforts.

In addition to identifying fire weather, meteorologists leverage the latest technology to identify the specific location of wildfires. For example, this image from California’s Camp fire in 2018, shows the fire identification, or hotspot. The saturated pixels represent fires which exceed the maximum radiative power threshold of the on-board satellite sensor. A good classification indicates a positive, but less intense, fire. Cloud-contaminated pixels convey a positive indication of a fire but clouds are precluding the actual intensity of the fire. Each fire is checked for time continuity which lends greater confidence that a fire is occurring and the estimated burn area (scar) over time, especially for long- lived wildfires. 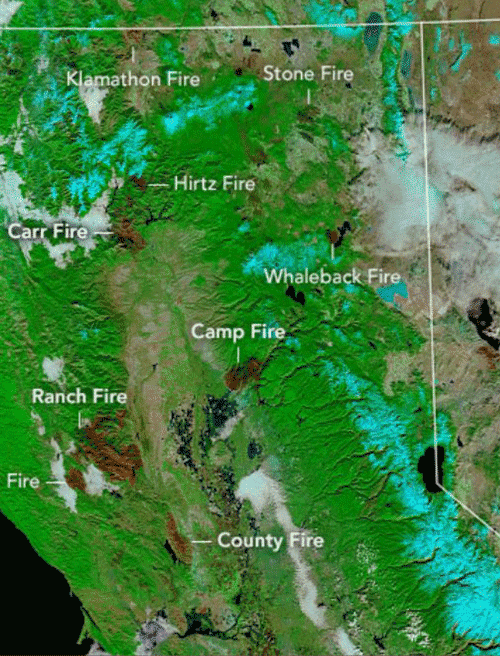 The technology also allows for a live look at the conditions with a GIS layer service. The map below is a time animation of Camp, California during the 2018 wildfire event.  This live, GIS layer service is hosted in an ArcGIS server containing the latest fire hotspot data and it shows the likelihood of a fire and whether the data are cloud contaminated, saturated or “good.” 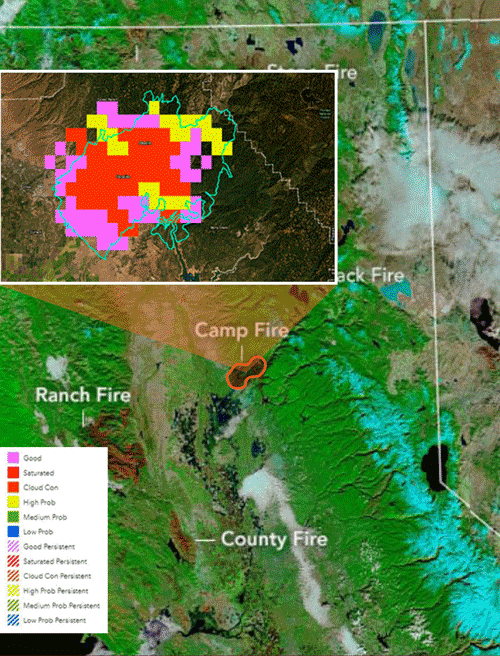 New satellite technology also plays a role in monitoring all phases of wildfires and provides useful data to help protect people and assets. GIS products, such as Esri’s wildfire map can pull data from two satellites that were just launched in the past five years by The National Oceanic and Atmospheric Administration. Although these satellites are primarily used for monitoring atmospheric properties, each of these geostationary satellites uses spectral bands (channels) for the purpose of identifying fires and provide high-spatial and temporal-resolution imagery that is ideal for providing wildfire information.

Climate change is affecting the number and intensity of fires, not just in the U.S., but worldwide. A recent study found that the 2019 fires in Australia, which burned more than an estimated 50 million acres, were impacted by human-caused climate change. Another study shows that climate change has doubled the number of extreme-risk days for California wildfires.

The increase in wildfires, and the toll it has had on life and property, has increased regulations related to wildfire risk. The California Public Utilities Commission began to consider and adopt regulations to protect the public from potential fire hazards associated with powerline and aerial communication facilities.

Having the ability to not only forecast fire weather, but to identify and monitor wildfires in real time could make a difference in saving lives, property, and livestock. Read the DTN e-book to learn more about the latest technology for locating fires. Find out more about DTN solutions for helping utility companies prepare, prevent, and mitigate wildfire risk.