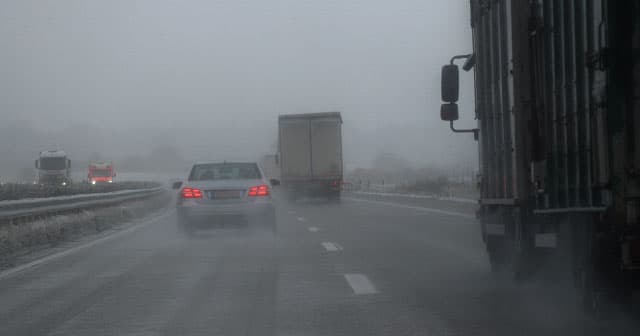 For most of the world, this winter has proven to be mild season. Except for a few extreme weather swings such as Storm Ciara in Europe and the blizzard “monster” in the northeast United States, the 2019-2020 winter weather temperature has been warmer than average.

We have moved on from the expectations of a snowy winter and as we enter April, are making plans for spring. But even though this winter didn’t bring the traditional arctic weather, there are still several weeks left for potential hazardous road conditions. In fact, roads in a mild winter can be just as, or even more dangerous.

According to the U.S. Department of Transportation a vast majority of weather-related accidents occur because of rain or low visibility and were responsible for more crash fatalities than snow in 39 of the 50 states between 2009 and 2013.

Hydroplaning was one of the main reasons for car crashes related to wet pavement and rain. Hydroplaning occurs when tires are separated by a thin layer of water and lose traction. The result is loss of steering, braking and power control. Since hydroplaning can occur at speeds as low as 35 mph it is a high risk even when driving slower.

Low visibility in rain and fog is another top reason for weather-related accidents. Research has shown that fog-related crashes are deadlier because fog can develop rapidly and reduces visibility to less than a mile, meaning that objects are not visible until the last minute.

Fog occurs commonly in the winter due to water vapor near the ground and temperatures cool enough to condense the water into low clouds, or fog. The proximity to the ground makes it difficult for most traditional radars to detect but there is technology, combined with weather modeling that allows for accurate fog prediction to help prevent delays and accidents.

An added danger is when fog condenses onto the road, instead of evaporating, and freezes on the roads. This very thin layer of ice often it isn’t visible to the driver.

Mild winters provide additional challenges for road maintenance managers who oversee preparing and keeping roads in hazardous conditions, such snow plowing, sanding or salting roads. With typical winter conditions, such as precipitation with cold temperatures for several consecutive days, it may be easier to determine how to treat large portions of the road system.

Even with above average air temperatures during nighttime the road surface temperature still can still dip below freezing. For example, cities in England, Netherlands and Spain are all experiencing a mild winter with air temperatures two degrees above average, yet close to half of the nights were considered critical, ie. road surface temperature fell to or below freezing. In these conditions, roads tend to get “cold spots” or patches of the road that can freeze. This is caused by the local environment of the road with a combination of factors, such as a shaded area, open areas or an elevated road area which will have lower air temperature.

Most road networks have been equipped with weather stations including road sensors which are providing ongoing road weather data, which for crucial for decision making and road weather forecasting,  but it only gives data for specific spots on the network . The route-based forecast – like DTN Roadmaster recently added to its platform – provides hyperlocal road weather forecasts for all roads within the road manager’s maintenance area.  A hyperlocal forecast can help winter road maintenance managers make critical decisions on where to grit – on one or selected gritting routes only or only on some cold spot road sections – or whether it is necessary. Route Based Forecast makes use of high-resolution forecasts, detailed information about the local surrounding of each road sections which influences the temperature of the road during day as well as the night (e.g. trees, buildings), RWIS measurement and optional even the results of thermal mapping.

A spring in your step and eyes on the road

So even while we exit the official winter by end of March, and for some it may seem like we said goodbye to winter awhile back, it is important to remember that weather can still impact hazardous road conditions. Route based forecasts, in addition to regular road weather forecasts, will  help those who monitor the roadways to keep drivers safe.