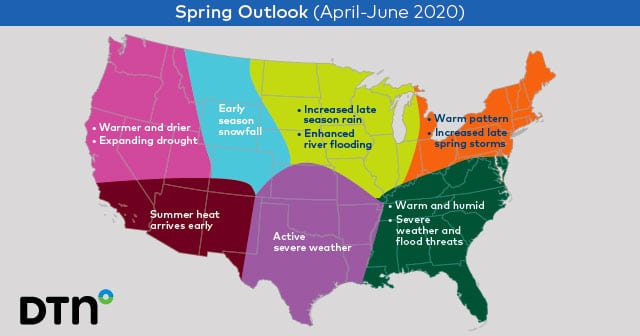 Industries and businesses should be weather aware

The long range forecast for the spring indicates that the weather pattern could be quite active across much of the country. It’s important news for businesses, especially weather-sensitive industries that could be impacted by the spring pattern.

The Spring and Severe Weather Outlook by Sector

Meteorologists use a complex formula of weather models, proprietary satellite data, and historical information to construct seasonal and long-range weather outlooks. Decades of global weather data collection can be used to compare recent conditions and verify the analysis. These seasonal and sub-seasonal range forecasts help organizations anticipate weather extremes and business impacts, potentially unlock new opportunities to become more cost-efficient. Here is how this spring may impact some sectors.

This spring is expected to have a more active severe weather pattern with May in particular likely to see frequent rounds of severe thunderstorms, especially across the middle of the country.

Hazardous weather is always a concern for utility companies, but the COVID-19 crisis has additional repercussions. Utility companies share national and international resources during an electrical outage, which may be limited due to quarantines and limited travel restrictions. This means even small storms may have a significant impact on utility companies.

Warmer than average temperatures will be prevalent across the southern and western United States, including an early extreme-heat episode likely in the southwest. This pattern is expected to result in above normal cooling demand late spring into summer, as consumers and businesses alike reach for their air conditioners and place a higher usage demand on utilities.

However, there is a possible period of above-normal heating demand likely in April, with a slight coolness lingering through spring in the northern and central states.

Spring river flooding will impact rivers through the central United States, especially in the Mississippi and Missouri River basins, which will affect transportation networks in the region. Additionally, heavy rains in the southeast will lead to more flood episodes through the spring season.

Early spring snows will occur through the central and northern mountains and across the northern tier of states, which could impact routes in the affected areas.

Early spring snowfalls should be confined to the western mountain and northern border states minimizing the impact of snow for most of the country’s airports. Enroute flights will encounter a stronger than average jetstream over the southern/southeast region, with potentially greater turbulence.

A more active severe weather pattern is likely across the central United States this spring, expanding east for late spring, which could result in some disruption for the aviation industry.

Bad weather can cause flight delays and cancellations and severe turbulence is a higher risk with thunderstorms.

Monitoring the potential for an early season tropical storm in the northern Gulf of Mexico will be a priority for the oil and gas industry. These storms could impact operations in the area, particularly during May and June. Alongside this, enhanced thunderstorm activity will occur through May along the Gulf Coast.

However, these weather events are balanced with slightly weaker average wind speeds projected over the Gulf of Mexico this spring, and with a near average end to the fog season expected.

Those tasked with maintaining public safety at outdoor events over the coming season will want to pay attention to extreme weather patterns. It could cause disruption to planned events, and have potential health and safety concerns for attendees.

Storms are likely across the central states this spring. The pattern is expected to expand east by late spring, with many parts of the eastern United States due to experience more active rainfall, especially in May.

Monitoring the weather impact will also be a priority in the southwest and south, where an early start to the heat season is expected.

Most areas of the country should trend back to warmer than average by May. The summer heat is likely to build earlier than usual across the southern and southwestern states.

Stay tuned and be weather aware as spring unfolds, weather trends and patterns have a way of being unpredictable, even for experts. The best way for businesses to plan, prepare and make critical-weather decisions is to invest in weather data and analytics geared for their industry.