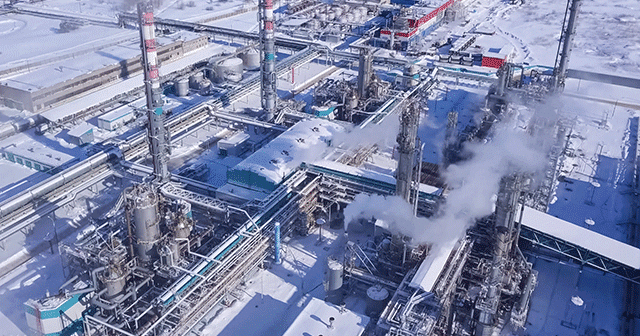 U.S. wholesale prices for distillates and propane reached seven-year highs late in the third quarter into the early fourth quarter, spurred on in part by energy shortages in Europe and Asia. There, low natural gas and coal stocks inspired a rise in global gas prices to more than $40 MMBtu in early October, which equates to nearly $240 on a per-barrel basis. Through the Henry Hub Natural Gas futures contract on the New York Mercantile Exchange, the U.S. benchmark, prices in the United States would reach the seven-year high settlement at $6.312 MMBtu on October 5 — a muted response against the global price spikes owing to different market structures, with the United States being the world’s largest natural gas producer.

How did we get here?

The latest supply crisis in Europe — notably the United Kingdom — and parts of Asia, including China, comes 19 months after oil supply swamped available storage tanks. That led to a plunge in West Texas Intermediate futures on NYMEX below zero, with the U.S. crude benchmark falling to a negative $40.32 bbl in April 2020. Millions of gallons of oil and refined products were held offshore in floating storage, while cargos for previously-bought LNG were canceled when much of the world closed their economies as the COVID-19 pandemic struck. 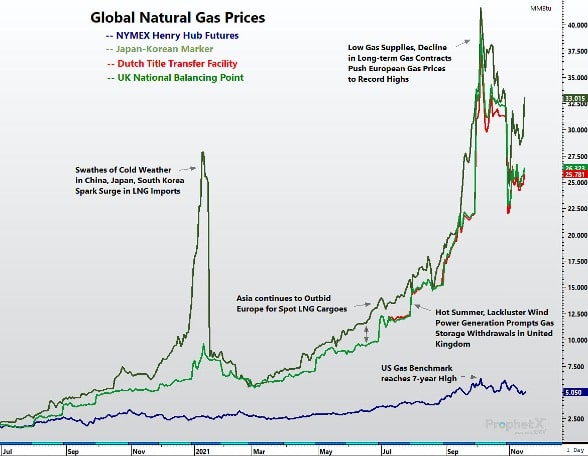 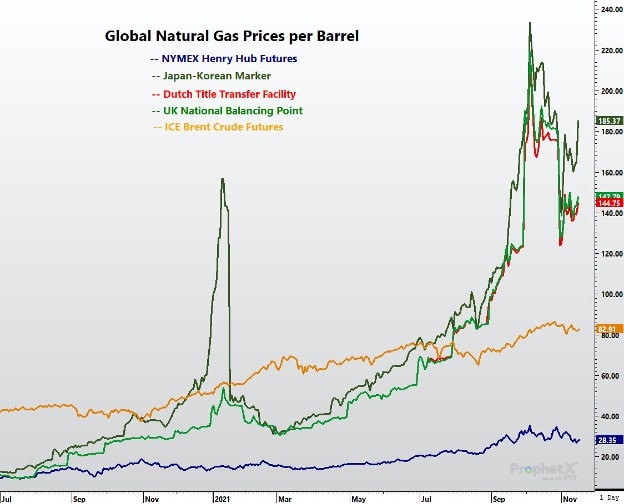 A little more than a week earlier, during an emergency meeting, Vice-Premier Han Zheng, who oversees China’s energy and industrial production sectors, ordered state-owned coal, oil, and electricity companies to secure enough supplies to satisfy winter demand at all costs. On October 31, China released gasoline and diesel fuel stocks from emergency reserves to avert a shortage in diesel and boost supply while refiners ramped up output.

Weather is the tie that binds energy shortages for residents of both continents, although this was a tipping point in some regard. Policy decisions contributed to the energy shortfall.

In a statement discussing natural gas and electricity price spikes in late September, the Paris-based International Energy Agency (IEA) said, “There were strong cold spells in East Asia and North America in the first quarter of 2021. They were followed by heatwaves in Asia and drought in various regions, including Brazil. All of these developments added to the upward trend in gas demand.”

During a hot summer in the U.K., which refitted its energy portfolio away from coal to wind-generated power — now accounting for 25% of its electricity generation — the wind failed to blow. This prompted a larger-than-usual withdrawal from natural gas storage, driving down supply. In mid-October, the European gas storage level was at 77% of capacity, compared to 96% of capacity at the same time in 2020 and 97% during the comparable period in 2019.

In the United States, February’s Winter Storm Uri and Hurricane Ida in August devastated oil and gas production and processing, with the effects of the two unusually powerful storms lingering today. On November 8, Phillips 66 said it would convert its 255,600 bpd Alliance refinery in Louisiana to a fuel terminal because the costs to repair the facility badly damaged by Hurricane Ida were too high. Ida is currently the costliest hurricane on record.

Unplanned outages globally joined by delayed maintenance from 2020 due to pandemic restrictions reduced LNG production more than expected in 2021, while hurricanes in the U.S. Gulf of Mexico briefly bottled up export facilities.

There have also been years of underinvestment in the oil sector, partly due to climate change policies. In the United States, there’s a new fiscal discipline by shale drillers to not go full bore to simply grow production. Investors are demanding returns on their investments, and U.S. oil producers are largely abiding — investing in new drilling to maintain output as opposed to growing supply. U.S. crude production averaged 11.5 million bpd in early November, compared to the 13 million bpd averaged in November 2019, data from the U.S. Energy Information Administration (EIA) shows.

Organization of the Petroleum Exporting Countries (OPEC), in alliance with Russia and nine additional oil-producing countries, have been unwinding 9.7 million bpd in production cuts made in April 2020, with OPEC+ agreeing to move ahead with another 400,000 bpd increase in oil production in December. Yet, some countries that are part of the pact, namely OPEC members in Africa, can’t lift output to meet their rising quotas due to internal unrest, aging fields, and a lack of investment in maintenance programs made worse by the pandemic. The collapse of global energy demand depleted the treasuries of producer-dependent economies in particular.

The International Monetary Fund (IMF), commenting on the shortage, said energy supply has been slow to react to price signals because of these factors, while energy demand has surged. They highlighted the rapid growth in industrial production, which accounts for about 20% of demand for natural gas.

Early starts to winter in northern Asia, including very cold conditions in China and Russia, pushed demand well above seasonal averages. Gazprom, bound by Russian law, first filled domestic storage before replenishing supply in Europe, which it began to do in early November.

Global gas prices have eased but are on a hair-trigger should cold spells dominate Europe and Asia this winter. In early November, the China Meteorological Administration warned of the possibility for colder-than-normal weather in January and February 2022 in parts of the country, adding there’s a high possibility for extreme cold.

Japan has become increasingly dependent on oil, gas, and coal following nuclear plant retirements in the aftermath of the 2011 earthquake and tsunami that caused the Fukushima Daiichi Nuclear Power Plant disaster. Of the 54 reactors in operation before the disaster, 21 reactors have been decommissioned. In late October, the Petroleum Association of Japan said utilities asked refiners for more oil as they look to switch from burning gas to oil amid high gas prices. Japan’s largest power generator, JERA, said on November 1 that it has enough LNG to satisfy winter demand but is reportedly still looking to buy cargos for December and January. LNG supply held by Japan’s major electric utilities in mid-October was at a five-year high.

U.S. natural gas storage is projected to end the heating season on March 31 with 1.6 trillion cubic feet, 4% below the five-year average, after beginning the season 3% below the historical average at 3.6 Tcf. Storage injections in September and October outpaced the five-year average to help narrow the deficit, following a below-normal injection rate during the summer months amid a strong pull on natural gas for electricity generation to satisfy cooling demand and higher exports, while production remained flat.

Demand for heating oil has been in a long-term downtrend and now accounts for about 4% of heating space consumption in the United States, concentrated in the Northeast. In the United States, heating oil is largely the same as ultra-low sulfur diesel fuel (following sulfur content reduction imperatives) and is priced in a differential against the ULSD futures contract on NYMEX.

While European energy companies are competing with their Asian counterparts for LNG, they have not sought heating oil from the United States, with the arbitrage economical for European refiners to ship product to U.S. shores. There’s no economic incentive to send heating oil to Europe, largely because very little oil-fired power generation remains on the continent. In addition to the shrinking heating oil market, ULSD prices in the United States have been underpinned by strong on-road demand and industrial production growth despite global supply chain disruptions. 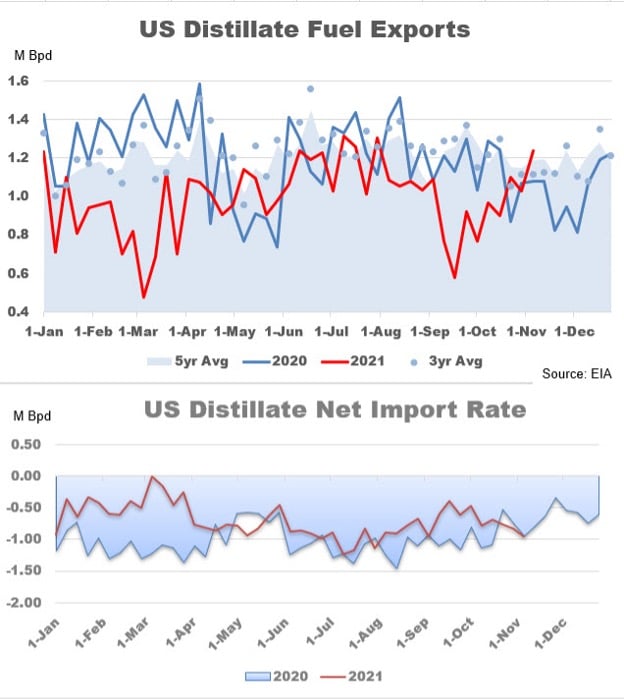 Strong U.S. demand — and the resulting higher prices — have slowed U.S. ULSD exports compared to the three and five-year averages. This dynamic indicates domestic strength is driving ULSD prices despite the energy challenges in Europe and Asia. 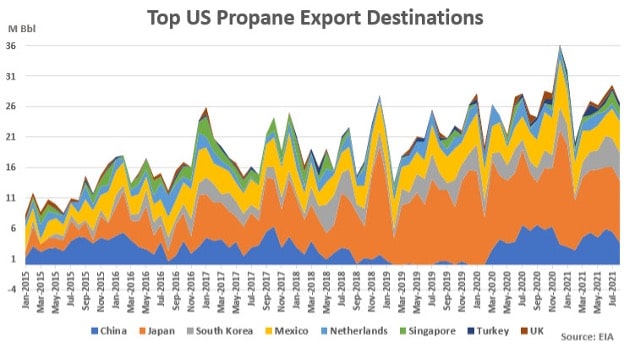 In contrast, U.S. propane exports have grown sharply, reaching about 1.3 million bpd this year, far more than the Middle East, with Japan followed by China as the largest buyers of U.S. propane. As propane exports grew with the advent of the U.S. shale boom, U.S. buyers — especially farmers who use propane to dry crops during wet harvests — found themselves competing with overseas buyers. This had a profound effect on domestic pricing, with wholesale prices at Mont Belvieu, Texas — where exports can be staged — holding a premium over wholesale prices at the Conway hub in Kansas for nearly five years until the pandemic. A rapid expansion of propane production capacity has offered better balance between domestic users and the export market, easing competition between international and domestic demand.

Still, in early November, U.S. propane stocks were 21.1% below a year ago at 94.9 million bbl, reeling from a sharp drawdown during the first quarter due to Winter Storm Uri. In October, U.S. propane prices spiked to a more than seven-year high. Continued strong export demand joined by a cold winter in the United States could push propane prices sharply higher this winter, as propane is used as a heating fuel by 5% of the U.S. population.

Oil prices have cooled since October, and governments have taken action to replenish depleted inventories. Still, prolonged cold would push oil and gas prices and their derivatives sharply higher. Should this development occur, expect more government action in forcing energy-intensive industries to reduce hours of operations or shut completely; this already happened in the U.K. and China in October, where fertilizer plants and smelters were forced to shut. Emerging inflation could also cut oil consumption, easing the global supply tightness experienced early in the fourth quarter.

Need help tracking all these factors?

Get the data and analysis you need to confidently track and act on the refined fuels market with DTN ProphetX®.