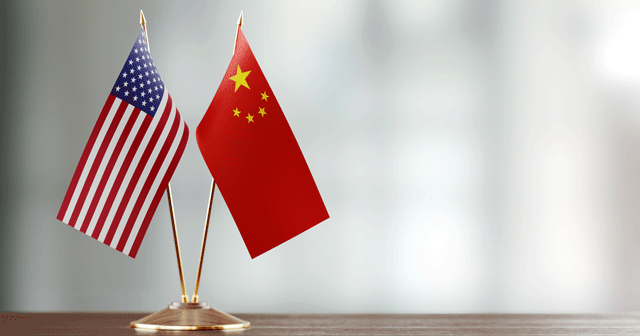 LOUISVILLE, Ky. (DTN) — While many economic storylines are being completely rewritten amid the last four months of global COVID-19 quarantine efforts and the subsequent economic crash, one key storyline from 2019 remains steadfast as we attempt to move back toward normality: the U.S.-China trade war.

It was the slowing of global trade, much of which is attributable to the trade war, that carried considerable blame for slowing global economic and oil demand growth in 2019. The Phase One trade deal struck between the United States and China in mid-January was at the time marketed as the great hope for the global economy in 2020. After all, hope for a coming trade deal had served as nearly the only cause for economic optimism throughout 2019. But in the wake of the COVID-19 outbreak, U.S.-China relations are once again breaking down. This makes a trade deal that already appeared doomed to fail nearly certain to do so.

With the 2020 U.S. elections now just around the corner and traditional campaigning crushed amid quarantine efforts, U.S. politicians are increasingly turning to an old trusted strategy of vilifying foreign governments to gain appeal at home. New tariffs on China and COVID-19 reparations have even been suggested in recent weeks. While Beijing certainly has much to answer for in their handling of the COVID-19 outbreak, the Smoot-Hawley Tariff Act of 1930 that helped turn a depression into the Great Depression serves to remind us of the risk of ramping up protectionist policies in the midst of an already depressed economy. That said, politically, such a strategy of campaigning against China paid dividends for the Trump campaign in the lead up to the 2016 election. And with polling data in the wake of the COVID-19 outbreak showing increasingly unfavorable views of the Chinese government among voters of both major U.S. political parties, it is easy to see why this could be a winning strategy once again in 2020.

In the coming months, we believe that a deterioration in U.S.-China relations will continue. Even if the Phase One trade deal does not break down amid deteriorating diplomatic relations and political rhetoric, we believe that it will break down as it becomes increasingly clear that the terms are not being met. This will undoubtedly have negative spillover effects for global commodity markets and economic growth more broadly. China’s American energy import obligation set in the Phase One trade deal was never realizable to begin with, much less after plummeting commodity prices in recent months have sent China’s volumetric obligations of U.S. imports surging higher given that the Phase One deal was made based on the dollar value of trade rather than volume of goods.

What many people seemed to miss was the ever so important, “above the corresponding 2017 baseline” part of the deal which puts China on the hook for far more than the headline figure of $52.4 billion of energy purchases from the United States. It is easy to understand why this was given so little attention, as the trade deal itself does not provide the 2017 baseline figures.

A Phase One trade deal fact sheet issued by the Office of the United States Trade Representative is the best official signal we have been given on the 2017 baseline figure. The fact sheet states that China’s American energy purchases would total at least $30.1 billion in 2020. If we subtract the agreement terms of an additional $18.5 billion of purchases this year, we get a 2017 baseline of $11.6 billion. The International Trade Commission pegged total U.S.-China energy-related trade at a lower $9 billion in 2017. For the sake of making our point while erring on the side of caution, we will work from this lower $9 billion 2017 baseline. This would bring the needed total of U.S. energy purchases by China closer to $70.4 billion over the two-year period – $27.5 billion in 2020 and $42.9 billion in 2021. 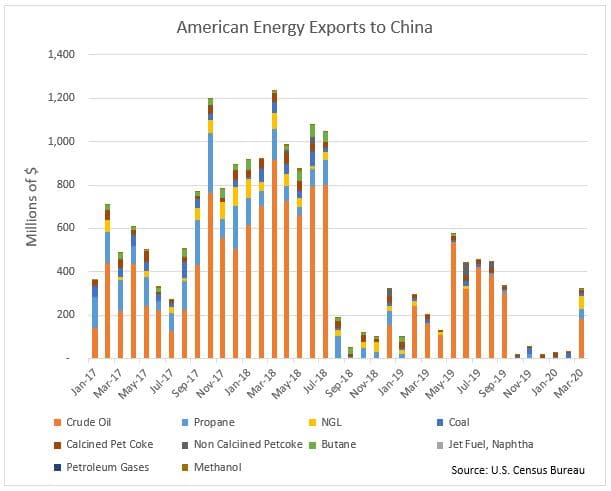 For the sake of wrapping our heads around these figures and putting them in volumetric terms, we make some simple calculations. Optimistically assuming an average crude price of $40 bbl, if the entire $70.4 billion were to be spent on U.S. crude, that would imply an average pace of imports from the United States of 2.4 million bpd over a 24-month period. While such a volume of U.S. crude supply to China is technically possible, it is highly unlikely that such a volume would ever be realized for a number of reasons including the impact on crude price spreads, freight rates, and the lack of Chinese appetite for light sweet crude.

Of course, China will not only import U.S. crude in an effort to meet their obligations. “American energy” encompasses LNG, LPG, refined oil products and coal. That said, optimistically only $3 billion per year of combined LNG, LPG and coal imports are likely over the 2020-2021 period using recent history as a guide. At the same time, the domestic refined oil products market in China is already oversupplied amid surging refining capacity. This has led China to become an ever-larger net exporter of refined products. As such, U.S. refiners should not expect a surge in product demand from China. U.S. crude therefore looks set to cover the vast majority of the energy purchase obligations outlined in the trade deal. Even optimistically assuming $3 billion per year of other U.S. energy imports, this still leaves $24.5 billion of U.S. crude purchases needed in 2020 and $39.9 billion in 2021. 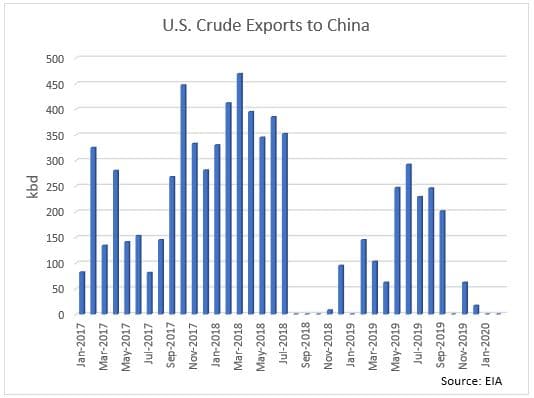 Given this historical context and the growth of refining capacity and crude demand in China over the past two years, you can see how it would have been realistic for imports of U.S. crude to rise by more like 500,000 bpd in 2020 relative to 2019’s pace. However, assuming an average $40 bbl price of crude, even a record-strong average pace of 630,000 bpd of U.S. crude imports in 2020 would only satisfy $9.2 billion of the $27.5 billion of U.S. energy imports needed this year. But it gets far worse.

A combination of Energy Information Administration and ship tracking data show that China is expected to import its first U.S. crude cargo of the year in May. Therefore, assuming China tried to meet their obligations for 2020 in the final seven months of the year, this would put them on the hook to import 2.9 million bpd of U.S. crude for the remainder of the year. To put this into relative terms, this would mean imports of U.S. crude would need to account for almost one third of total Chinese imports and would be nearly on par with total imports of both Saudi and Russian crude – China’s two largest suppliers. This pace of needed U.S. imports is wholly unrealistic. An effort to meet this pace of U.S. imports would not only be economically infeasible but would certainly not sit well with Saudi Arabia and Russia who have worked for years to gain market share in China.

Even prior to the COVID-19 outbreak, the International Energy Agency forecasted total crude demand by Chinese refiners to grow by less than half of the 2019 pace at just 400,000 bpd in 2020. Therefore, even optimistically assuming Chinese crude demand experiences a V shaped recovery, U.S. crude would not only need to take the entire Chinese market share of all other comparable light sweet grades but would need to displace an additional 1.5 million bpd of heavier more sour grades as well in order to prevent a massive ballooning of stock levels.

While state ownership in a large portion of the Chinese refining industry could potentially allow for more politically-driven purchases rather than economically-incentivized ones, it appears as though Chinese negotiators have bitten off far more than the industry can chew in the Phase One trade deal. The Chinese government implementing a quota system or subsidies to entice buyers to purchase U.S. energy sources like crude and LNG would likely be necessary if the terms of the deal are even attempted to be satisfied.

China’s inability to meet the terms of the deal will become increasingly apparent to the Trump administration and markets as we progress through the year. With a U.S. presidential election quickly approaching amid mass unemployment and an American voting base that looks willing to accept further escalation of U.S.-China hostilities in the wake of the COVID-19 pandemic, we should expect U.S.-China trade tensions to persist throughout the year. The economic headwinds that follow from the trade war and that helped lead to disappointing crude and refined product demand in 2019 will become increasingly relevant as we emerge from the global pandemic and look forward through the second half of 2020.