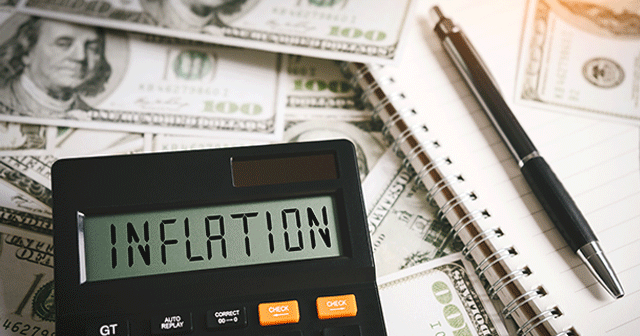 Coming out of the pandemic, rising prices were to be expected. But this inflationary period is not looking very temporary. Let’s look at the reasons why and what to expect next.

There are credible arguments an era of low inflation in the United States has ended — and that our post-pandemic economy will include elevated inflationary pressures for a very long time. What this means for gasoline marketers is unclear, as historical references may no longer apply in a world that looks very different than it did just a few years ago.

Last year, there were concerns demand-pull and cost-push inflationary pressures would evolve into stickier, built-in inflation, when higher prices for goods and services lead to higher wages to address the rising costs of living, which, in turn lifts the cost of production. We are seeing that now, which has aroused what might be described as a complacent Federal Reserve in 2021 to turn hawkish in 2022.

COVID-19 and the response to the pandemic changed the global economy abruptly. And while the United States emerged with strong economic growth, owing in large part to the vast financial support provided by the federal government, most countries are contending with a far different and less desirable experience. What is becoming increasingly likely is we are sailing in uncharted waters following what Jim Bianco of Bianco Research, L.L.C. described as the “economic event of our life.”

The inflationary pressures of government lockdowns that led to supply chain disruptions, shortages in manufacturing building blocks (including raw materials and critical parts), and a dearth of workers were exacerbated by the end of globalization in February, with Russia’s invasion of Ukraine. Commodity prices were already elevated ahead of Russian President Vladimir Putin’s unprovoked and barbaric war in Ukraine and spiked in response to the worst aggression seen on the European Continent since World War II.

Putin’s invasion dashed hopes that inflation in the United States would dissipate (some thought) as early as late 2022, as global supply chain constraints eased. China’s draconian, “Zero-COVID” policy response to a spike in cases in major cities — including its largest, Shanghai, a city of 25 million and global financial hub — was already further disrupting the global supply chain this year. The war in Ukraine is now fragmenting trade, leading to new global trade routes and trading partners as Western countries are increasingly shunning business with Russia.

The fallout from COVID-19 was thought to bring about a reshoring of outsourced industries, as companies would look to ensure business continuity by replacing just-in-time inventory with a more resilient and durable supply chain at home — or at least closer to its shores. Such an evolution wasn’t guaranteed amid the many challenges in undoing the efficiency gains captured by just-in-time inventory, not to mention greater costs in rerouting supply chains, but Putin’s invasion changed the calculus. In early April, Shell plc announced a roughly $5 billion asset write-down, as the London-based company walked away from its business activity in Russia.

The new normal of economics

In the early days of the pandemic in 2020, British Economist Charles Goodhart told The Wall Street Journal that inflation would rise between 5% and 10% in 2021, while the COVID-19 pandemic would mark the dividing line between the deflationary period following the collapse of the Soviet Union in December 1991, and resurgent inflation for the next 20 years. Goodhart was prescient, with the U.S. Consumer Price Index up 5.3% in June 2021, from 12 months earlier, and ended 2021 at 7.1%, data from the Bureau of Labor Statistics show. By February, CPI was up 7.9% year-on-year, a 40-year high.

What underpinned Goodhart’s forecast was his expectations for a significant demographic shift from a labor surplus to shortage amid aging populations, and a shrinking pool of working-age people in the West and China. This April, the number of individuals filing for initial unemployment insurance in the United States dropped to its lowest level since 1968. For economic growth to be maintained, employers will need to pay workers more to retain their service, adding to inflationary pressures.

Worries over rising inflation and lost purchasing power kept U.S. consumers in a sour mood in ending the first quarter. The University of Michigan’s Consumer Sentiment Survey fell to a more than 10-1/2 year low in March. This data point should concern gasoline marketers since, historically, when consumers are pessimistic over their financial position, they tend to spend less on discretionary items. Discretionary spending closely correlates with the elasticity component in gasoline demand, such as weekend driving. 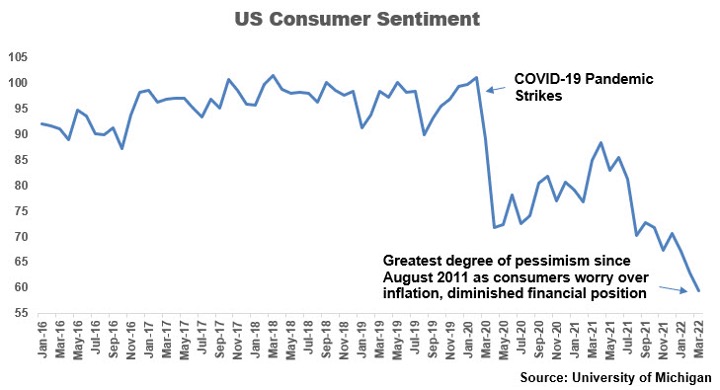 However, consumer debt belies the pessimism, with data from the Federal Reserve Bank of St. Louis showing consumer debt service payments as a percentage of disposable personal income ending 2021 at 5.5% below the 5.8% level at the end of 2019 (before the pandemic) — and less than the 6% rate in ending 2007, when the U.S. economy went into recession amid the Great Financial Crisis. It peaked at 6.7% in the fourth quarter 2001 following the 9/11 terrorist attacks, with the United States also in recession.

Left unchecked, inflation is incendiary. In early April, following the release of minutes for the Federal Open Market Committee’s March 15-16 meeting, St. Louis Federal Reserve Bank President James Bullard said the Fed’s monetary policy was “behind the curve,” meaning the central bank had been too slow to respond to inflation. Such a scenario is worrying because it could lead the Fed to overtighten, which harms economic growth and could lead to recession.

As low interest rates foster greater business activity with cheap borrowing costs, climbing rates can slow economic growth by limiting investments. If inflation persists unchecked for too long, it could require sharply higher interest rates over an extended period of time — that could lead to recession.

The Fed lifted the federal funds rate 25 basis points in March, the first hike in the key interest rate target since 2018. The federal funds rate is the benchmark for setting interest rates on mortgages, automobiles, and credit cards. At their six remaining meetings in 2022 and into 2023, Fed officials are expected to lift the overnight lending rate between banks, having met expectations for a 50-basis point hike at their May 3-4 meeting.

Fed officials in March worried inflation could become “unanchored,” a condition in which climbing inflation propels further inflation as businesses respond more quickly with higher prices. Such a psychology feeds on itself and can lead to stagflation, an unwelcome pairing of high inflation and slow economic growth. The United States last experienced stagflation in the 1970s, ending in 1982 following steep rate hikes that led to two recessions.

Lawrence Summers, U.S. Secretary of the Treasury from 1999 to 2001, has been a critic of the Fed’s monetary policy for the past year. He believes the federal funds rate will need to go above what FOMC officials are indicating through their median dot-plot outlook of around 3%. Summers thinks the Fed will need to lift the rate to 4% or 5%, having indicated the interest rate must hold above the inflation rate for a while to tame the inflationary pressures and expects recession to follow.

Contributing to inflation pressures are elevated energy prices, which could advance further amid limited spare oil capacity in the global market due largely to underinvestment. Several European countries are rethinking their energy strategies amid their dependency on Russian oil, gas, and coal, among other commodities. This trend will continue as divestiture from Russia forces a global trade reshuffling.

Amid these changes, the question becomes how high do oil prices need to go before sparking demand destruction? Housley Carr with RBN Energy makes a guess that crude oil prices sustained over $135 bbl would begin to hurt the U.S. economy and dampen demand.

Read more analysis from Brian Milne and other DTN market experts on our Energy Insights page.