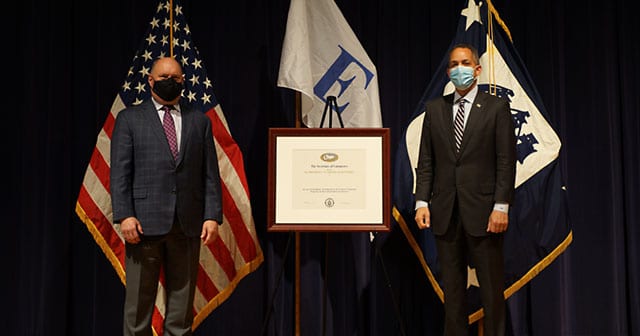 *Update 11/15/2021: Due to the pandemic, the President’s “E” Award was recently presented to both 2020 and 2021 winners. Jim Block, Director of Business Development at DTN (left) accepted the President’s “E” Star Award for Export Service from Don Graves, Deputy Secretary of Commerce (right), in Washington D.C.

“DTN has demonstrated a sustained commitment to export expansion. The “E” Awards Committee was very impressed with DTN’s significant growth in exports of analytical software as a service over multiple industry sectors. The company’s creation of a focused sales strategy by world region was also particularly notable. DTN’s achievements have undoubtedly contributed to national export expansion efforts that support the U.S. economy and create American jobs,” said Secretary Ross in his congratulatory letter to the company announcing its selection.

DTN delivers operational intelligence to organizations with complex supply chains. The result is confident decision-making that helps our customers prosper. DTN empowers organizations worldwide that operate in a number of key industries including agriculture, downstream oil and gas, shipping, marine, transportation and more.

“Exporting our solutions and delivering operational intelligence is an important part of building our brand and network throughout the world,” said Marc Chesover, DTN President. “We bring our agriculture and weather-related solutions to organizations and governments around the world to help them address our changing climate and weather events that can greatly impact local economies.”

In total, Secretary Ross honored 39 U.S. companies and organizations from across the country with the President’s “E” Award for their role in strengthening the U.S. economy by sharing American ingenuity outside of our borders.

U.S. companies are nominated for the “E” Awards through the U.S. Commercial Service, part of the Department’s International Trade Administration. With offices across the United States and in embassies and consulates around the world, The International Trade Administration lends its expertise at every stage of the exporting process by promoting and facilitating exports and investment into the United States; administering Anti-Dumping and Countervailing Duties orders; and removing, reducing, or preventing foreign trade barriers.

About the “E” Awards

In 1961, President Kennedy signed an executive order reviving the World War II “E” symbol of excellence to honor and provide recognition to America’s exporters. Criteria for the award is based on four years of successive export growth in one or more international markets. For more information about the “E” Awards and the benefits of exporting, visit www.export.gov.