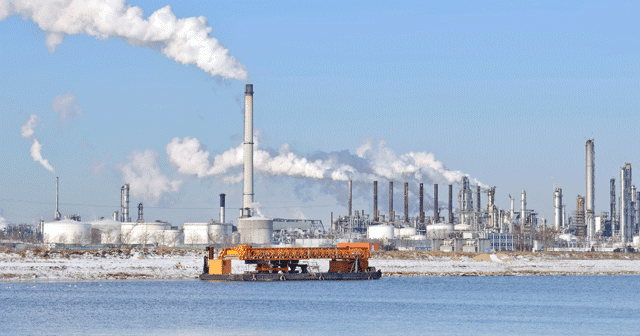 Gasoline futures in the United States were trading near the equivalent of $100 bbl and moving higher, ushering in the fourth quarter as natural gas and coal shortages in Europe and Asia spiked prices to record highs, with Europe’s gas benchmark topping the equivalent of $200 bbl. Expectations that natural gas shortages will lead to oil being burned as a heating fuel (namely in Asia) was a catalyst that pushed Brent crude futures on the Intercontinental Exchange above $80 bbl. Goldman Sachs forecasts a $90 Brent bbl price late in the fourth quarter, and Bank of America expects the international crude benchmark to reach $100 bbl sometime in 2022.

Oil prices haven’t reached these heights since 2014 — rebounding off a $15.98 bbl low plumbed in April 2020, when the COVID-19 pandemic struck the United States, triggering government-enforced lockdowns that crushed oil demand. Driving demand recovered during the summer months, with vehicle miles traveled on U.S. roads in June and July 0.8% below the comparable period in 2019, Federal Highway Administration data shows. U.S. diesel demand has been strong, even if restrained by supply chain disruptions amid a driver shortage that has forced some trucking companies to leave rigs idled. Further, there are freight outflow constraints as a record number of vessels lay at anchor off U.S. shores amid a shortage of dockworkers, slowing rail movement. Jet fuel demand is experiencing a gradual recovery but is picking up pace nonetheless, as the federal government ended travel restrictions for more than 30 countries in November.

While these are positive developments for the industry, the reason oil prices — and subsequently, gasoline prices — are sharply rallying is because of energy supply constraints that are widely expected to intensify over the winter months, especially if Europe and Asia experience a colder-than-usual winter. DTN forecasts a colder-than-normal February for most of Europe.

Factors creating the seemingly-sudden scenario are manifold, ranging from policy decisions and underinvestment to weather-caused supply disruptions. The causes of depleted natural gas stocks in Europe and coal inventory in Asia date back to winter 2020-2021, when extremely cold weather in China and arctic weather conditions in northern and central Europe during a protracted heating season forced a drawdown in stocks. Those inventories failed to rebuild quickly enough, stymied by heatwaves in Asia and drought limiting hydropower generation, notably in Brazil, while global liquified natural gas production was below expectations due to unplanned outages and delayed maintenance from 2020 amid pandemic restrictions. And the wind didn’t blow hard enough in the United Kingdom, which counts on wind generation to satisfy 25% of its power demand, forcing a draw on gas. The shutdown of hundreds of coal plants in the U.K. and Germany that forced dependence on gas and renewables may have come too quickly, as Russia’s Nord Stream 2 gas pipeline to Germany might not be in service until 2022. Meanwhile, a group of European Union (EU) officials debate whether to grant certification for said pipeline, indicating Russian exporter Gazprom may not be in compliance with EU law.

The United States suffered severe weather disruptions as well, notably in February when a massive ice storm and bitter cold slammed Texas and surrounding states, forcing widespread production loss for crude and gas, as well as refined fuels processing. In May, a ransomware attack on the Colonial Pipeline shut down the 2.6 million bpd pipeline system, forcing refiners to hold back refining output, which enflamed panic buying with terminal product runouts leading to gasoline outages at retail outlets. Hurricane Ida made landfall on August 29 as a Category 4 storm, at one point forcing nine oil refineries in Louisiana to shut down. One of those refineries, Phillips 66’s 255,600 bpd Alliance Refinery in Belle Chasse, suffered heavy damage and might not return to service. Hurricane Ida also shut in more crude oil production than any other hurricane on record (more than 30 million bbl), having heavily damaged a Shell transfer station in Gulf of Mexico waters.

What are the consequences?

Gas-to-oil switching in global power generation this winter is estimated to increase world oil demand by 400,000 bpd to more than one million bpd, with Saudi Arabia’s national oil company Aramco estimating the switch to add 500,000 bpd of new demand this winter. Goldman Sachs sees gas-to-oil switching at 645,000 bpd, while Bank of America said global oil demand would outstrip production by one to two million bpd — and could easily top two million bpd amid sustained fuel burning during the winter months, especially in Japan.

Against such foreboding statistics, some dynamics could limit how high oil and gasoline prices climb this winter, including demand destruction due to high prices and fuel rationing. Energy-intensive industries in the U.K. and Asia could be idled; this has already happened in China. These suspensions could intensify in the winter months, which would further disrupt the global supply chain and become a drag on economic growth. China and India have been vocal about the deleterious effect high oil prices would have on their economies. However, there are limitations; as major economies continue to grow, adding to oil demand, not fueling the furnaces of their citizens during the winter months is politically perilous.

Global oil production could increase at a faster pace, with the Organization of the Petroleum Exporting Countries (OPEC) and Russia-led partners holding back 4.159 million bpd of their output in November (based on their agreed-to quotas, adhering to a July accord that gradually increases production 400,000 bpd monthly). OPEC+ cut 9.7 million bpd of their oil output in April 2020 in response to lost global demand amid the COVID-19 pandemic. There were expectations OPEC+ would have doubled the increase for November to 800,000 bpd when they met on October 4, anticipating the gas and coal shortages in Europe and Asia. However, a few members are producing below their quotas. Some speculate this is due to a lack of investment limiting their ability to return to pre-COVID production rates. An early winter in Russia has also prompted the producer to limit spot gas sales, as it ensures domestic storage is filled.

U.S. oil producers could also ramp up production in the shale plays, as tight oil output was the catalyst that pressured global oil prices below $100 bbl seven years earlier. While oil producers are increasingly adding rigs in the fields, they are practicing capital discipline; most have indicated they will not return to the all-out drilling and associated cash burn. Oil prices above $100 bbl could change the calculus for oil production, but short-term respite from surging fuel prices is unlikely; even less so if parts of the world experience a colder-than-usual winter.