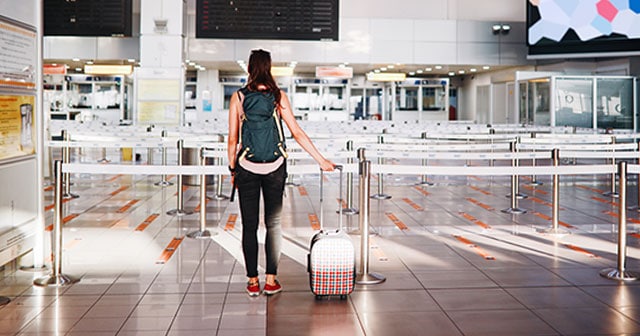 When Warren Buffett and Berkshire Hathaway announced they had sold the entirety of a more than $4 billion position in U.S. airlines because of the coronavirus back in early May, the decision was met with thunderous debate and scrutiny. A seemingly sharp turn from Buffett’s, “Never bet against America” investment mantra alarmed many, while others thought that Buffett was simply being too pessimistic about America’s return to pre-pandemic normalcy. While Buffett admitted that he didn’t know exactly what the future had to hold for U.S. airlines, he did feel confident that, “The world has changed for the airlines.” There was a corollary to this outlook at the time which I believe could have been stated, “The world has changed for refiners.”

As summer driving season in the U.S. comes to an end, demand for gasoline – the one fuel not massively oversupplied and with the strongest refining margin – is set to turn lower. As such, the global oil market is now having to face the reality of refining margins remaining weak for months to come as gasoline demand weakens seasonally and as the middle distillate market remains oversupplied – carrying a massive inventory overhang even with the already anemic refinery utilization rates. And if we are to believe airline executives and those who know the airline market best, the lack of jet fuel demand that is leading to ballooning stocks of distillate fuel oil may persist for years to come.

While I’m not here to debate whether or not Buffett made the right investment decision, the choice to divest in the industry can’t be ignored; particularly, in light of what airline company executives have had to say in the following months. Buffett had expressed concern that even three to four years out, miles flown may still be below pre-pandemic levels. Over two months later in July, Delta Air Lines executives stated that they do not expect a “sustainable recovery” for two years or more and that they do not expect business travel to ever return to pre-pandemic levels.

Business travel by air may only make up around 12-19% of air travelers, but they account for 60-70% of industry revenue due to the need to fly first or business class at late notice and the upcharges for flight associated amenities. Business travel is often the key to jet fuel demand in September and early Q4. A new business travel season typically begins in September following the Labor Day holiday and helps soften the blow to demand as summer vacation air traffic ends. But this year, the business travel bump should be nonexistent.

Not only is the post-Labor Day business travel bump in jet fuel going to be nonexistent this year, but a steep drop in economic activity and corporate profits portends persistent jet fuel demand weakness into 2021. According to Fortune Magazine, half the respondents in a recent survey of Fortune 500 CEO’s said that business trips at their companies would never return to pre-pandemic levels. While I typically err on the side of never saying never, all signs are pointing to a true “new normal” that will persist at least for years to come.

Corporations that are suffering from an ailing economy and who have now witnessed the cost savings and efficiency of technology like video conferencing amid the pandemic are unlikely to quickly return business travel to pre-pandemic levels even if we were to see a vaccine in the near future. As flight profitability falls due to lack of business travel, this poses a longer-term threat to jet fuel demand as ultimately the number of flights offered and in the air at any one time will follow lower as airlines are forced to make cuts. 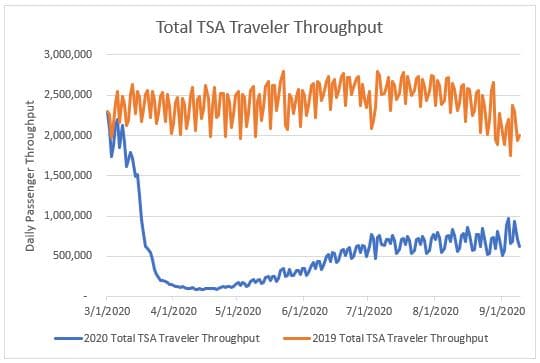 As we noted in late June, TSA checkpoint data for total traveler throughput was already revealing passenger flight growth plateauing and a break from the uptrend seen in May and June. TSA checkpoint numbers for travelers in the U.S. showed the highest total traveler throughput since mid-March over the Labor Day holiday weekend on September 7. But at 935,308 travelers, total throughput was still down a whopping 61% from the high seen during the Labor Day holiday weekend last year. Once again emphasizing the lack of business travel, on Tuesday as the U.S. got back to work, total throughput fell back to a near 64% deficit to year-ago levels and on Wednesday total throughput was back to a 69% year-on-year deficit. 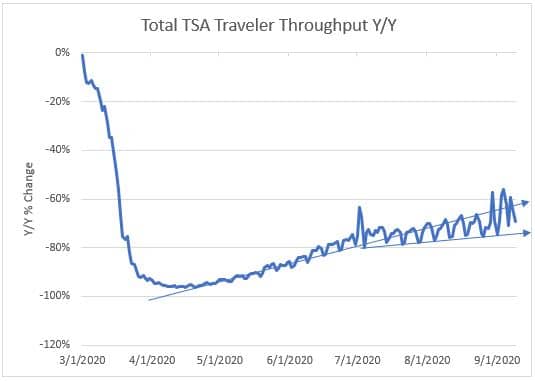 The oversupply of jet fuel that has followed from plummeting air travel has led refiners to blend jet’s usual portion of the barrel into the diesel pool, leaving U.S. distillate fuel oil stocks 44 million bbl, or 33%, above year-ago levels as of the week ending August 28 according to EIA data. But this problem for refiners is widespread globally. Over the past week, refining margins have dropped across the globe as Asian refiners also struggle to deal with excess jet fuel and distillate fuel oil amid the collapse in demand. Reuters reported early this week Asian jet fuel and distillate cash differentials fell to their weakest point since late May. 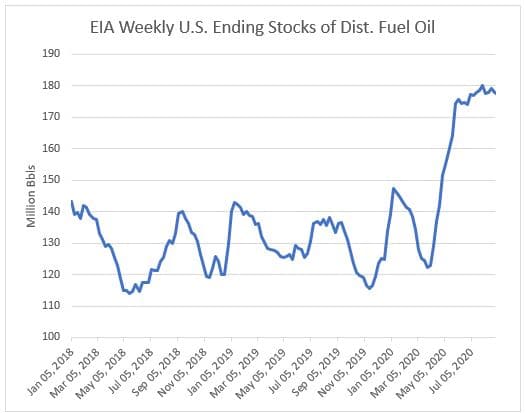 The global physical crude market has been flashing warning signs for weeks, signaling that crude demand at the refinery level was softening globally. Both Brent and WTI futures have seen time spreads move into deeper contango over the past week. This reflects a market that is preparing for further crude inventory builds amid rising global OPEC+ crude production and sustained weakness in refinery runs. Brent based ULSD refining margins are down 19% from month-ago levels and 69% from year-ago levels.

It is increasingly apparent that the EIA, OPEC+ and many others underestimated the duration of the pandemic’s impact on fuel consumption and ultimately crude demand at refiners. With refiners still suffering globally and unlikely to boost runs any time soon, this calls into question OPEC’s decision to continue to increase output moving into refinery maintenance season and a seasonally weak period for refined product demand. A prolonged refinery maintenance season this fall could help draw down refined product stocks and support product prices, but if this comes as global crude supply is increasing, this would ultimately lead to rising crude stocks once again.

In the short term, refiners and crude prices can’t escape the distillate fuel oil backlog created by a lack of jet fuel demand as seasonal gasoline demand weakness begins. Increasingly, however, this is looking like a longer-term persistent headwind for crude and product prices. Outlooks from airline executives and those who know the industry best point to refiners feeling the pain from COVID-19 jet fuel demand destruction for years to come. The longer this persists, the more likely refiners are to look to shifting refining slates and cracking activity to limit jet fuel yields.