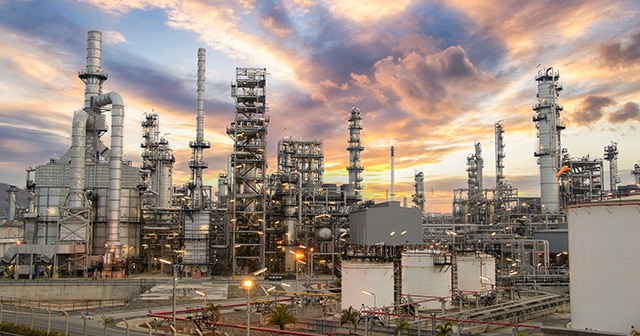 Weekly U.S. Petroleum Status data from the EIA has been choppy in recent weeks amid major storms that shut in production and refinery operations and disrupted import/export activity along the Gulf Coast. With offshore production shut-ins coming days before the shuttering of refineries along the coast, for the week ending August 28 the EIA’s report revealed a large 9.4 million bbl draw to crude stocks. In the week ending September 4, with refineries slower to return to normal operations than offshore production, commercial crude inventories built by 2.0 million bbls.

While it may be easy to disregard last week’s report as another data set too skewed by inclement weather to draw any real conclusions, the extremely small draws to refined product stocks reported should not be ignored. When coupled with this month’s Short-Term Energy Outlook (STEO), EIA data and forecasts are now more closely aligning with our outlook of persistent weakness in refinery runs and stronger-than-previously-reported production.

In July, we concluded that the EIA was overestimating refinery runs in their outlook for the remainder of the year. In the July STEO, an overly optimistic outlook for refined fuels led the EIA to forecast U.S. refinery runs rising back in line with year-ago levels by the end of Q4. In the latest edition of the STEO released last week, the EIA cut expectations for crude oil inputs at U.S. refineries for the September-December period by 360,000 bpd compared to their August forecast. Refinery runs in December are now projected to be 220,000 bpd lower than what was expected in last month’s STEO. For the balance of 2021, the EIA revised refinery runs 224,000 bpd lower to average 16.37 million bpd. This is still overly optimistic in our view, as it would place refinery runs just 1% below 2019 levels. As such, we believe further downward revisions in EIA refinery run forecasts should be expected. 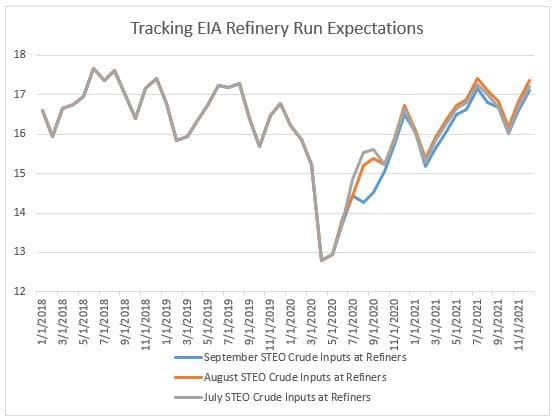 The small draws to stocks amid the extreme weakness in runs points to the potential for sizable refined product inventory builds if refinery runs simply recover from their hurricane-induced outages. This emphasizes the persistent underlying demand weakness for refined products. It is then little wonder why — even amid US refinery runs dropping 2 million bpd over the past two report weeks — WTI based refining margins for ULSD have declined 20%, and Brent-based ULSD margins have declined 22% from month-ago levels.

This month’s STEO report also included large revisions to domestic production data. In late June, we concluded that U.S. crude production had already bottomed and was pushing 400,000-500,000 bpd higher from May’s pace during the month, despite the EIA reporting in their weekly data at the time that U.S. production was continuing to fall from May’s pace. As we said in late June, “For further confirmation that U.S. crude production is back on the rise, we should watch for the adjustment factor flipping into positive territory in the coming weeks. Just as the EIA underestimated the rate of production cuts in recent months, a quick turnaround in U.S. production is also likely to be underestimated in the production estimate and lead to a positive adjustment factor.” 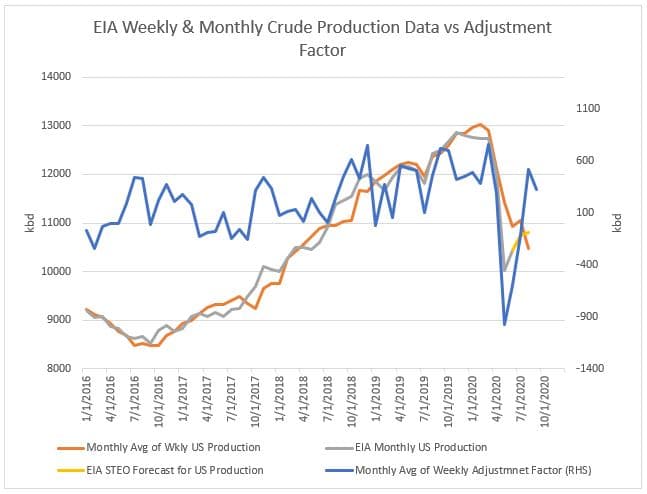 The EIA’s move to a positive weekly adjustment factor in July and August as we had forecast supported our outlook, but last week the EIA confirmed our view that they had massively underestimated crude production beginning in June and that this skewed their weekly production estimates going forward. Last week’s STEO release showed the EIA revising U.S. crude production 690,000 bpd higher in June from last month’s edition of the report, bringing production to 10.44 instead of the previously reported 9.75 million bpd pace. This means crude production rose 420,000 bpd in June from May, within the range we projected back in June. Production was revised higher in each month over the September-December 2020 period, averaging 11.11 million bpd, or 120,000 bpd higher than they had forecast in their last STEO in August. 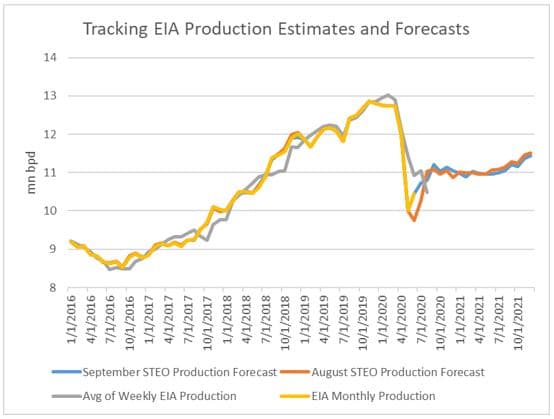 For the week ending September 4, the EIA reported net imports of crude oil rising 581,000 bpd from the prior week. This came despite imports of Saudi Arabian crude falling to their lowest in weekly EIA data history going back to 2010 at just 100,000 bpd on the week. Still, at just 2.48 million bpd, net imports of crude were down 951,000 bpd, or 28% year-on-year and crude inventories still rose amid the extreme weakness in refinery runs.

As a corollary to the EIA overestimating refinery runs and underestimating domestic crude production, they also overestimated how much crude U.S. refiners would need to pull in from the global market. In this month’s edition of the STEO, the EIA cut their crude oil net import projections for the remainder of the year and throughout 2021. After cutting their September-December forecast by 440,000 bpd in this month’s STEO, the EIA now projects net imports of crude to average 4.4 million bpd in the September-December period. We believe that—due to the EIA continuing to overestimate refinery run expectations and therefore demand for imports—net imports are likely to come in 300,000-400,000 bpd below this expectation.

Of course, much of this net import pace will be determined by global demand for crude and not just domestic demand. Chinese purchases of U.S. crude should continue to support crude exports this month, but with global refining margins suffering, expectations for continued export growth appear limited at this time. Longer term, if refiners continue to struggle with oversupply of jet fuel as we expect, U.S. light sweet crude may see unexpected buying interest as refiners increasingly try to target gasoline rather than distillate fuel oil yields. However, we don’t see that causing an export surge in the near term.

If the glut of distillate fuel oil leads to refiners working to limit product inventories this fall as we expect, refinery utilization will not live up to EIA expectations and will lead to swelling crude stocks once more. The growing degree of contango in both the Brent and WTI forward curves reflects this pessimistic outlook of a market that is once again anticipating stock builds.

While we believe U.S. production will ultimately turn lower heading into 2021, with OPEC+ lifting crude production despite persistent refined product demand weakness, it appears inevitable that crude stocks rise once more. Without an unforeseen sharp rebound in product demand or further crude production cuts, crude stocks will build, pulling crude prices lower as refiners cut back on runs to undergo seasonal maintenance and allow refined product stocks to draw down. If the fundamental oil market weakness we foresee develops, WTI risks a move back into the high $20’s before the market begins to tighten in 2021. This move lower will be exacerbated if the U.S. dollar continues higher as we have seen in recent weeks.