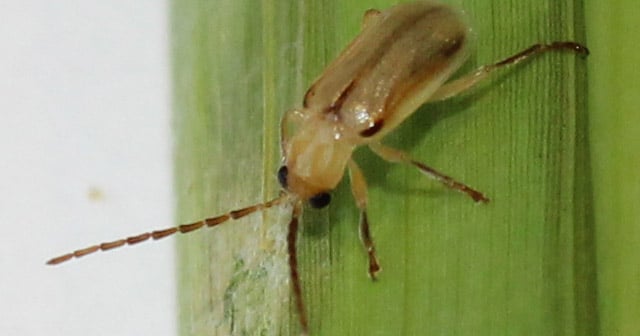 Weeds are a nuisance. That’s a given. Obviously, they compete with our crops for sunlight and nutrients. In some cases, they can get nasty, engaging in a form of silent, chemical warfare by spreading toxins meant to inhibit growth and production. And their ability to lie dormant in the seedbed for years before bursting forth makes controlling them a pain. As a result, regular control, year-after-year, can drag on and feel like a never-ending battle.

In a year like the one we’ve been having, a good chunk of our cropland didn’t get planted. And though there may not be any corn or soybean growing, weed control is still important. But not just for the reasons you may think.

Weed management can be as important for managing insect pests as it is for managing the weeds. We like to think that insects feed on corn and soybean because it’s the best thing around. And in some cases, that’s true. But it is actually rare for insects to feed exclusively on one host plant. Such restrictive diets would make it impossible for the insect species to survive anywhere the host is not. That’s why many insects feed on weeds as well as crop plants, taking advantage of what is available in their area.

For example, early-season pests like black cutworm and true armyworm start out feeding on the grasses and weeds adjacent to crop fields. This makes sense, as many fields have yet to be planted or emerge by the time these species reach the corn belt in early-to-mid April. They only switch to corn when the preferred hosts begin to dry out, which usually happens to be the time that the corn is at its most tender stages. Common alternative hosts for these pests include grasses, like bluegrass, and other plants, such as pigweed.

Even pests we consider to be strongly associated with a particular crop can survive on alternative hosts if the situation calls for it. Corn rootworm larvae have been found to survive on the roots of other grassy hosts, with survival rates almost as high as it is on corn. European corn borer can likewise survive in the stalks of several weeds including dock, cocklebur, smartweed, and others.

So even though you may not have a crop in the ground, you’ll still need to manage the weeds that do appear. Before making any management decisions, make sure you know what weeds you’re dealing with. Plants like marestail that may be resistant to glyphosate will need different herbicide options. Larger plants will also need to be handled differently from smaller plants. Tilling can suppress smaller-sized weeds, but may not be able to break up the roots of larger plants. And also keep in mind that tillage will not eliminate weeds. They will grow back. But breaking up the soil may also provide an additional benefit by exposing insect larvae and pupae. Finally, check to see what options are available on planting a cover crop. Sufficient ground cover will suppress the growth of unwanted plants.

Every management decision affects every other decision. How you control your weeds this year will determine what types of insect pests you may face next season.

If the heavy rains this season stopped you from planting corn or soybean in some of your fields, you have a few options available. You can plant a cover crop and keep the field productive until next season. Or you can rotate in a late-season or winter crop like wheat. Or if it just isn’t worth the effort, you could simply leave the field empty and hope for better next year. Regardless of what choice you make, you’ll want to think about the weeds that are bound to pop up in your field.