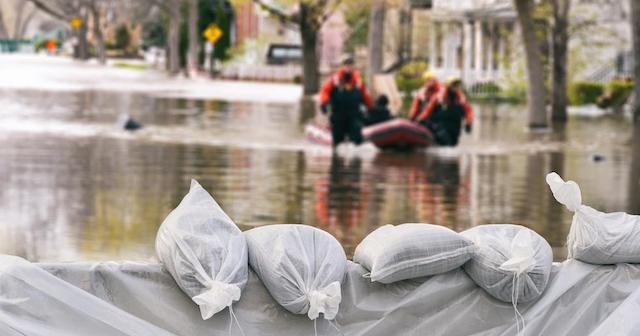 As the weather gets warmer and the grass greener, it’s easy to forget that those of us who live in relatively flat or low-lying areas might still be at risk of extreme weather-related risks like flash floods.

As we have seen recently in the central and southern U.S., heavy rains at the start of June that followed record rainfall in May have resulted in devastating flash floods along the Arkansas and MIssissippi Rivers.

Flash floods can occur within minutes or hours of excessive rainfall, when the water cannot be contained within riverbanks or seep into the ground because of the sheer volume of water. In the northern states, where ice remains an issue well into the spring months, the release of water from dams or ice jams can also contribute to flash flooding. The damage from this rapidly rising and fast-moving water can be devastating. Uprooted trees, damage to buildings, movement of boulders and soil, as well as damage to roads and bridges are common. Perhaps most significant, however, is that most deaths due to flooding occur in flash floods. This is usually because of the lack of warning available with the flash flood occurring so quickly.

There are two major factors contributing to flash floods: the intensity of the water and the duration of time the water remains. Large volumes of water from a released ice dam can cause considerable damage within minutes, while excessive rain from a spring thunderstorm may take a bit longer to build up, but may remain longer as the water is redirected to channels such as rivers or lakes. Depending on the type of soil and ground cover, such as roadbeds or even boulders and trees, the water will be redirected, taking the easiest path before it has time to absorb into the soil. Unfortunately, sometimes this path is directed towards populated areas.

Populated areas near rivers are at the greatest risk of flash floods. Many of these areas build levees along the river as a means to hold back the rising water during early spring runoff. These are not always effective, such as the flood in 1993 when many levees failed along the Mississippi River, causing massive flash flooding on both sides of the river.

In spring, when the ground is saturated from the melted snow, there is greater risk because the ground cannot hold any additional water so excess runs off in the form of flooding. In addition, a rapidly warming spring can melt the ice and snow too quickly causing the equivalent of volume from a massive thunderstorm over several hours. Combined with thunderstorms across the region, this can lead to a recipe for massive flooding.

As the weather warms, many people like to experience the great outdoors after a long winter inside, and they frequently flock to tranquil areas along streams or rivers. But be warned:

The temptation to let your guard down and go outdoors in the warmer months is understandable, but Mother Nature can be unforgiving at any time of year. Extreme weather in the spring or summer months can be just as devastating as winter weather events, so educating yourself on the precautions and planning that are needed before, during and after flash fooding is essential to remain as safe as possible.