In early April we called for China to remain the most resilient importer and source of oil demand in the world amid the recent plunge in global crude prices. Since the 2014 oil bust, China has established itself as an opportunistic buyer and importer of crude amid dips in global prices given both ample storage capacity and rising demand. With China being the origin of the COVID-19 outbreak and the first nation to begin quarantine efforts, it followed that China would also see refined product demand and refinery runs recovering well before nations in the West. This set the stage for the massive rebound in crude imports that was just confirmed in official data. Unfortunately for U.S. crude producers and those still hanging their hats on China living up to the terms of the Phase One U.S.-China trade deal, new data continues to reveal China failing to live up to their end of the agreement.

The latest official data from China’s General Administration of Customs show Chinese crude oil imports jumping 19.2% year-on-year in May to an all-time high of 11.34 million bpd. Imports were up 14.8% from April’s 9.88 million bpd pace and 16.7% higher from March’s eight-month low of 9.72 million bpd. With waterborne deliveries from China’s largest suppliers in the Arab Gulf, West Africa and Latin America taking between four to six weeks to arrive on shore in China after loading, the record pace of imports in May aligns perfectly with rising Chinese purchases amid plummeting prices in March and April. Despite the dip in Chinese crude imports in March, the January-May average for imports of 10.4 million bpd is still 4.5% above year-ago levels for the first five months of the year.

Queues for unloading oil tankers have formed offshore Shangdong as independent refiners in the region have soaked up a flood of cheap crude that hit the water in April and May. So many independent refiners trying to bring crude onshore at the same time has reportedly led to discharge wait times of 20 to 30 days at the key port of Qingdao. This flood of crude imports into the home of the vast majority of China’s independent refining sector aligns with official data from China’s National Bureau of Statistics showing that refinery runs in April rebounded from March. Refinery runs were reported at 13.1 million bpd in April, up 11%, or 1.3 million bpd, from their lows in March.

As we outlined in April, refiners in China face government-created incentive structures outside of normal profit margin or economic considerations. Independent refiners in China, who have largely been responsible for the growth in refining capacity and crude demand in recent years, are under strict quota systems for crude imports. State owned refiners (who have exclusive product export license) also operate under a product export quota system. Like a bureaucratic budget-maximization model, refiners are under high pressure to maximize their crude import and product export quotas every year or risk having their quota allocations cut in the coming year. This creates an incentive to continue to import crude and export products when demand outlooks and refining margins suggest otherwise. This helps explain why Chinese refiners would be increasing refinery runs in April despite a glut of refined product around the world and why they are now increasing crude storage despite global crude benchmarks working toward backwardation.

Crude has also been pulled onshore in China as a result of growing trade volume in the just over two-year-old Shanghai futures contract. A reported flood of buying by “hermit” investors – or small investment arms of wealthy families in China – helped push the physically settled Shanghai contract on the International Energy Exchange (INE) to a premium to global benchmarks. This led state owned majors like Sinopec and PetroChina to deliver the sour grades into the contract. Seven crude grades can be delivered against the futures contract – Dubai, Upper Zakum, Oman, Qatar Marine, Masila, Basrah Light and Shengli. As Shanghai futures contracts were bought up, the INE was reportedly forced to buy out additional storage capacity from state owned majors and independents.

In early May we forecast a deterioration in U.S.-China relations as the 2020 U.S. elections near and it becomes increasingly clear that the terms of the Phase One trade deal are not being met. The breakdown in diplomatic relations ramped up quickly after issuing our outlook, with heightened geopolitical tensions around both the handling of the COVID-19 outbreak and the apparent end of Hong Kong’s, “one country, two systems” model of governance with Beijing.

Trade data for April that was just released from the U.S. Census Bureau show Chinese purchases of U.S. energy falling from March’s already dismal figure. The data show $28.1 million of US crude purchased by China in April, down from $181.9 million in March. Total U.S. energy purchases were seen at $224.8 million, down from $320.4 million in March. China needs to import $27.5 to $30 billion worth of US energy this year to meet the terms of the deal. Over the first one-third of the year, the United States has only exported $600.6 million of U.S. energy to China. This is just 2% of the energy purchases needed to meet the terms of the deal. 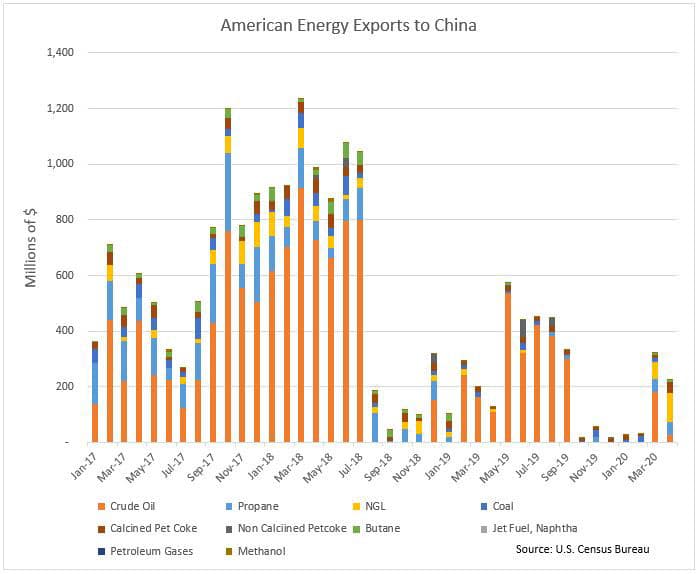 While official data does not yet exist for May, real-time vessel tracking data from Tanker Trackers show U.S. crude exports to China surging from 137,824 bpd in April to 741,395 bpd in May. With many VLCC’s arriving from the Arab Gulf to discharge crude in the U.S. Gulf Coast and with U.S. crude prices plummeting in April, it makes sense that China would book a large number of U.S. cargoes during the month of May. If confirmed by official data, this would put U.S. exports to China at their highest on record and 58% above their previous record in March of 2018.

Assuming a generous average price of $20 bbl and holding imports of other forms of U.S. energy constant from April, this would bring the May total of U.S. exports to China to $656.4 million. Even if Chinese purchases of U.S. energy were to continue at this rate through December, this would only bring the total to $5.9 billion for the year – or 21% of their commitment. Even if crude prices average $40 bbl for the rest of the year in this scenario (bringing total U.S. energy exports to China to average closer to $1.2 billion per month in the second half) this would only bring the yearly total to just under $9.1 billion – only 32% of their $70.4 billion commitment.

We still forecast that China’s inability to meet the terms of the deal will become increasingly apparent to the Trump administration and markets as we progress through the year. With a U.S. presidential election quickly approaching and an American voting base that looks willing to accept further escalation of U.S.-China hostilities in the wake of the COVID-19 pandemic, we should expect U.S.-China trade tensions to persist. We still expect China to continue to lead the growth in global crude demand and be the driving force in balancing the global market, but ultimately Chinese buying alone will not be enough. A return to normalcy in refined product demand around the globe – not just in China – will be necessary for a sustainable rise in crude prices.