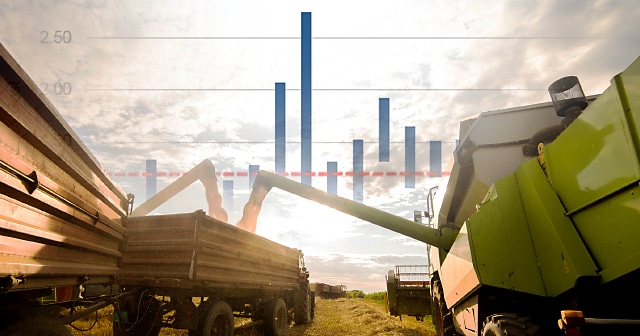 Yes, Kansas wheat yields are expected to be higher this year as few traces of last year’s drought remain. The tour estimated an average yield of 47 bushels an acre (bpa) and a Kansas crop of 306.5 million bushels (mb), up from 38 bpa and 277 mb a year ago. There were also other interesting bits of information that said a lot about the current state of U.S. wheat production.

Not only are 31.5 million U.S. winter wheat acres the lowest plantings in over 100 years, but Unglesbee noted on the first day of the tour that seven million acres for Kansas, the king of winter wheat producing states, is also the lowest since 1910.

Wheat streak mosaic looks like less of a threat in 2019, thanks to better wheat varieties, but rust infections were seen in south-central Kansas. Nitrogen and other nutrient deficiencies showed in many fields, a result of low wheat prices squeezing inputs out of the crop budget.

Unglesbee’s most discouraging observation came from Mark Hodges of Plains Grains Inc. on day two: “Abandoned acres are projected to reach 8% to 10%, but that could easily go higher. Some of it is actively being sprayed out right now.”

To say U.S. wheat producers are feeling financial pressure is an understatement. DTN’s HRW Wheat Index of cash prices hit a low of $3.77 on the last day of April, some 27% below USDA’s estimated production cost of $5.13 a bushel for all U.S. wheat, not including land expense.

That deep discount is among the lowest valuations HRW wheat has seen in two decades, outside of 2016 when the basis widened to a dollar and cash prices plunged to half of USDA’s estimated cost.

With 64% of U.S. winter wheat rated good-to-excellent and global crop conditions looking mostly favorable early, is there any hope for a higher HRW wheat price in 2019?

Fundamentally speaking, maybe not. But I’ve also been around the block enough to know that surprises happen — both in markets and in life. The current ending stocks-to-use ratio for HRW wheat of 65% indicates a national average cash price of roughly $3.80, near where prices are currently trading.

However, keep in mind USDA’s ending stocks-to-use ratios have a low statistical correlation to actual HRW wheat prices. Eighteen years of data show changes in USDA’s estimates account for just 32% of the changes in actual prices.

The good and bad news for producers is wheat prices have a lot of price volatility not strictly governed by official estimates of supply and demand. In other words, better pricing opportunities can still emerge in 2019, even if the fundamental situation doesn’t change much.

In three of the past four years, we have also seen cash HRW wheat prices trade above USDA’s cost estimate, excluding land expense. There is no guarantee prices will reach this minimal level, but $5.13 is the target to watch.

Today’s low prices reflect a bearish mood that can change as the season progresses. Market prices reflect supply-and-demand realities, but they also display a lot of emotional chaos that can sometimes give producers a better selling opportunity in otherwise bearish years.