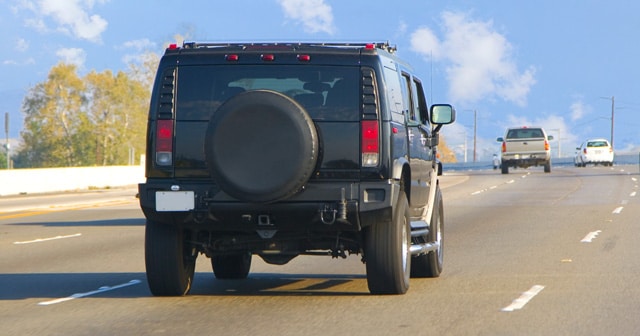 Inflation abounds — including the cost of a gallon of gasoline — but have we crossed a threshold? Does a national average of over $3 a gallon no longer prompt most U.S. motorists to ration their tank’s supply by driving less in a long-viewed psychological benchmark triggering demand destruction?

When pump prices climb, GasBuddy, an app that provides real-time fuel prices at more than 100,000 gas stations, grabs headlines as journalists at mass media publications don their energy expert caps and report on the lowest and highest gas prices. Suddenly, the motorist is aroused, downloading the app to seek out the lowest gas price, no matter the inconvenience.

Gasoline prices are practically ubiquitous in U.S. society, bannered across the landscape. No one wants to pay extra for gas, a commodity with little distinction among the retail outlets that sell the transportation fuel. Loved and cursed in the same breath, Americans have long held a peculiar perspective on how they define a fair price for a gallon of gas. 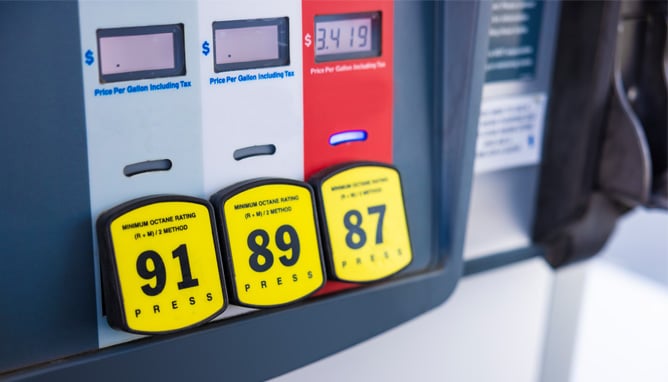 The psychology of shortages

Shortages trigger another strange human response, which is frequently counterproductive and aggravates the situation. The ransomware attack on May 7, which forced the operator of Colonial Pipeline to shut down its 5,500-mile network — and remain mostly offline until late on May 12 — put on display a quite frankly ugly exhibit of human behavior.

News of the pipeline shutdown, which supplies about 45% of the gasoline, diesel, and jet fuel consumed by roughly 50 million people along the heavily populated East Coast, quickly spread. GasBuddy became the most downloaded app during the week of May 14, with motorists searching for stations that still had gas to pump. More than 15,000 retail outlets, primarily in southeastern states where Colonial Pipeline is the principal fuel supplier, ran out of fuel.

One can make an argument that the app, along with ill-informed television personalities and social media, sparked a game-like phenomenon that spurred the panic buying that made the tightly supplied fuel market from the shutdown far worse, causing the widespread station outages. The experience provides a curious lesson in human behavior, with motorists waiting in long lines that stretched for blocks to top off their gas tanks as retail outlets not even served by the pipeline ran out of gas.

It appeared as if no one cared about the price paid, with social media images of gasoline dispensed in plastic bags in the trunks of pricy vehicles chronicling the thoughtlessness. Of course, there were the obligatory and economically ignorant rants from state attorneys general and U.S. Energy Secretary Jennifer Granholm, warning that those caught price gouging would be prosecuted. In a White House press briefing during the pipeline outage, Granholm said the Biden administration “will have no tolerance for price gouging.” In reality, higher prices would have slowed the panic buying and mitigated the supply outages.

Through the experience, the U.S. gasoline average price would top $3 a gallon. Prices were already trending higher and within reach of $3 a gallon before the Colonial Pipeline outage, climbing alongside crude prices on surging U.S. economic growth as society looks beyond the COVID-19 pandemic. Ending mask mandates, fully-opened businesses, and an American consumer flush with cash would have released pent-up demand. Nonetheless, the Colonial outage was the accelerant, and the release of pent-up demand from more than a year of restrictions on individuals and businesses is likely the irresistible force to move the once-thought immovable object — U.S motorists accepting $3-gallon gas.

A look at the numbers

End-use gasoline expenditures totaled $387.586 billion in 2018. The latest data from the Energy Information Administration shows slightly less than $403.427 billion spent in retail electricity sales while accounting for about 30% of total energy expenditures for the year. There were about 274 million vehicles registered in the United States in 2018, according to Statista, equating to $1,415 spent on gasoline annually per vehicle. U.S. personal consumption expenditures in 2018 averaged $42,800 per capita, according to Federal Reserve Economic Data. While realizing not everyone in the United States drives a gasoline-powered vehicle, in 2018, annual gasoline costs as part of personal consumption were in the neighborhood of 3.3% per capita.

Now consider, according to Hamilton Beach, manufacturer of small electric household appliances, including coffee makers, women in the United States spend $2,327 on coffee annually and men $1,934, which averages $2,130.50 per year or 5% on a per capita basis. Of course, not everyone drinks coffee, but the illustration shows the U.S. motorist has the capacity to pay more at the pump.

It’s true higher gasoline prices are regressive and will account for a much higher share of spending for those with lower incomes, many of whom lack alternative transportation options. Retailers serving poorer communities understand this dynamic better than others. Yet, higher pump prices are on the horizon, no matter the disproportionate fallout; this has to do with climbing costs through government policy and the global oil outlook, which is limiting investment in exploration and drilling.

U.S. oil refining capacity is declining. A handful of refineries in the nation have closed or are being repurposed to produce renewable diesel fuel, namely serving markets along the West Coast, where retail gasoline prices in California have crested above $4 gallon. 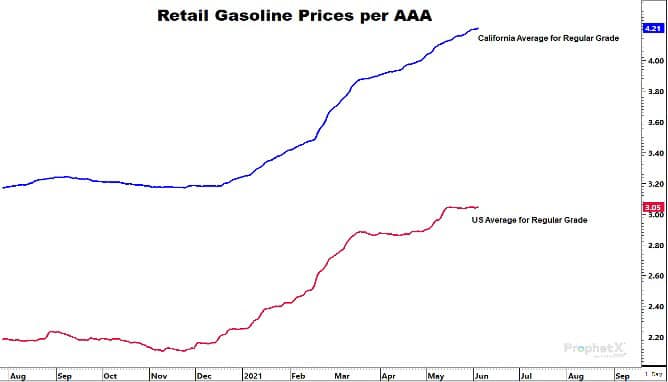 A comparison of the average U.S. price for regular grade gasoline (in red) vs. the average cost in California (in blue).

While the country overall has more refining capacity than demand, it is concentrated in the Gulf Coast. Typically, this arrangement works, although the Colonial Pipeline outage in May highlighted its vulnerability. Several Gulf Coast refineries reduced run rates to avoid a supply back up because they couldn’t move product on the 2.5 million bpd refined fuels pipeline network.

Tanker truck drivers sprang into action, working overtime to deliver fuel to retail outlets, sometimes adding 100 miles or more per trip. Yet, an enduring driver shortage worsened by the pandemic that prompted a jump in retirements is another component that will add costs as it tightens the supply chain during the critical last mile. Higher wages to retain employees and spur new hiring join increasing insurance costs, which will be passed through the supply chain. Kenny Vieth, president and senior analyst with ACT Research, indicates that insurance costs currently account for 5% to 6% of operating costs, compared with about 4% 10 years ago.

The outdated Merchant Marine Act of 1920, commonly known as the Jones Act, which restricts the waterborne transport of cargo within the United States to vessels that are U.S.-flagged, crewed, owned, and built, is another driver of higher costs at the pump. The number of Jones Act-compliant vessels is limited, driving up the per-barrel cost of using them by as much as three times higher than non-compliant vessels. The Jones Act has entrenched and powerful special interest groups supporting the protectionist law, so don’t expect its retirement anytime soon.

There were still gas stations with no fuel during the Colonial Pipeline outage when Washington was calling for a hardening of cyber defense by pipeline operators. Clearly, there’s a need to better protect the security of pipelines. However, doing so will add costs that again will eventually be passed to U.S. motorists filling up at the gas station.

The role of renewables

While some of these cost components have long been part of the price per gallon of gasoline, the Renewable Fuel Standard (RFS) is increasing pump prices now. The RFS mandates that an increasing volume of petroleum-based road fuels must be made with renewables, with the obligation to meet this federal mandate falling on oil refiners and blenders. Bank of America Global Research estimates the annual cost of meeting the RFS, known as the Renewable Volume Obligation, was $10 per barrel in early June, equating to $0.24 per gallon. Refiners and blenders who can’t blend enough renewables into their petroleum-produced fuels must buy what is known as a Renewable Identification Number (RIN).

RIN costs divide the oil industry, with some benefiting handsomely from the sale of the credit whose only function is to demonstrate compliance with the RFS. For others, the cost of buying RINs has on occasion topped labor costs, with some refiners spending hundreds of millions of dollars annually in their procurement. Wherever you find yourself on the curve, increasing RIN costs push retail gasoline prices higher. The difference between now and 2013, when RIN prices first showed up in a material way (before going into hibernation), is that the U.S. motorist appears more accepting of higher gasoline prices. Welcome to $3 per gallon gasoline.