If you’re reading this article, chances are pretty good you’ve heard of Hurricane Irma. She reached Category 5 this morning, the strongest on the Saffir-Simpson scale, with sustained winds of 185 mph and gusts over 200 mph. You may have also noticed a funnel or cone shape forecasting her path. This is called the Cone of Uncertainty. So, what does it mean? 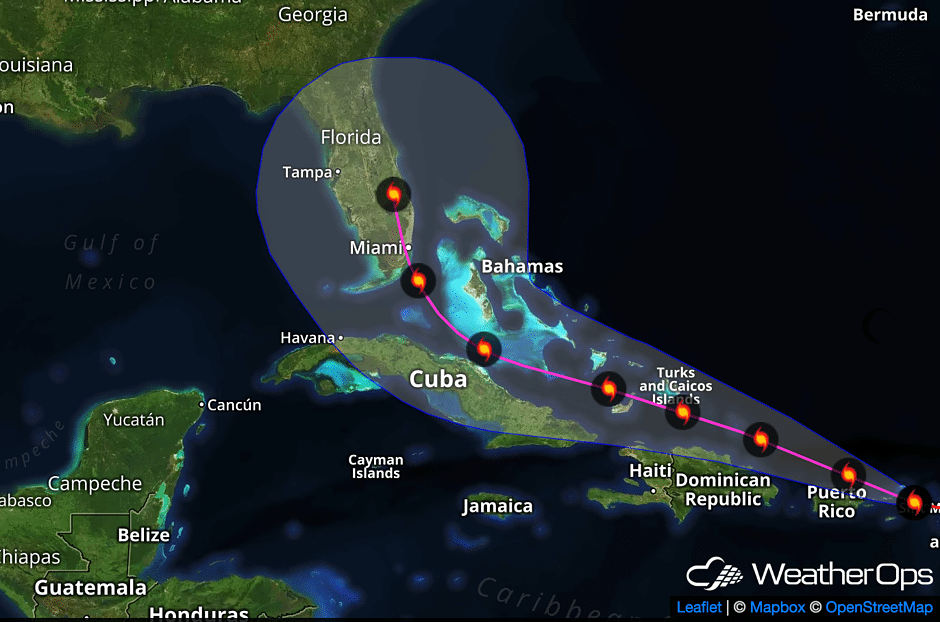 The above image shows the current Cone of Uncertainty for Hurricane Irma. The point of the cone is where the hurricane currently exists. The rounded part is the forecast location for 5 days (Sunday, September 10) from now. What is this cone showing us?

The shape of the cone will also change as the storm’s path changes. However, the size of the cone (how narrow /wide) will remain the same.

“The cone represents the probable track of the center of a tropical cyclone, and is formed by enclosing the area swept out by a set of circles (not shown) along the forecast track (at 12, 24, 36 hours, etc). The size of each circle is set so that two-thirds of historical official forecast errors over a 5-year sample fall within the circle. Based on forecasts over the previous 5 years, the entire track of the tropical cyclone can be expected to remain within the cone roughly 60-70% of the time.”

So, this is the “probable” track, not the exact track, not a guess, but probable. That line you see in the center of the cone is not the precise path expected. The cone also only tracks where the center of the hurricane is expected to go. It does not account for the size or intensity of the storm. Areas outside the cone can be affected by winds and storm surge.

The forecast track of the hurricane becomes increasingly uncertain with time. By day 5, the storm could be over 200 miles off from the centerline. This is why the cone grows along the way. And this is why you shouldn’t focus on that thin line in the middle.