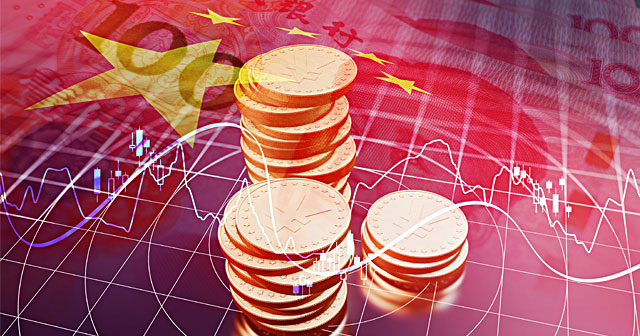 This week’s IMF outlook calling for China to be the only nation globally to post positive year-on-year GDP growth for 2020 continues to reflect what oil imports, vehicle traffic data and earnings reports from the world’s largest public companies have been saying for months: the Chinese economy has bounced back faster and stronger than anywhere else in the world. In early April, we laid out exactly why China would surprise the world with their strength in crude purchases this year, but not even we foresaw the speed at which China’s economy would recover. For Chinese crude demand in the fourth quarter, it is the weakness in global refined product demand—not domestic demand—that is setting up the potential for counter-seasonal weakness in Chinese refinery runs.

All eyes are on China’s positive economic data and outlook this week, but for Chinese refiners and the global oil market in Q4, refined product demand outside of China is going to become increasingly important. In our view, it is going to take both sustained strength in Chinese crude purchases and a recovery in refined product demand outside of China in order for OPEC+ to continue to ease crude production curtailments as planned. With the fourth quarter now upon us and a new year quickly approaching, it is time to revisit the themes that led us to accurately forecast China’s response amid the initial market crash. 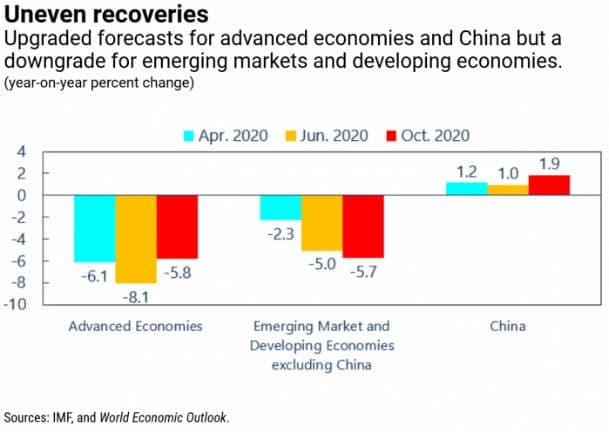 Refiners in China face government-created incentive structures in addition to economic considerations derived from the market. Independent refiners in China, who have largely been responsible for the growth in refining capacity and crude demand in recent years, are under strict quota systems for crude imports. State-owned refiners, who have near-exclusive product export license, operate under a refined product export quota system. Like a bureaucratic budget maximization model, refiners are under high pressure to maximize their crude import and product export quotas every year or risk having their quota allocations cut by the government the next year. This creates an incentive to continue to import crude and export products even when demand outlooks and refining margins would suggest otherwise.

Over the years, this quota maximization incentive structure has created a clear seasonality to Chinese crude import volumes and refined product export volumes. Given that independent refiners are trying to maximize their crude import quotas, and that state-owned majors are trying to maximize their crude export quotas before year’s end, a Q4 surge in both Chinese crude imports and product exports is typical.

Reports indicate that independent refiners have already utilized the vast majority of their crude import quotas for the year. This comes even as independent refiners received a third batch of crude import quotas for the year back in July, bringing the 2020 quota 10% above the total allocation for 2019, at 3.68 million bpd. In recent years, the market has been surprised by crude import and product export quota expansion announcements by Chinese regulators as late as November.

Therefore, while our outlook assumes the already near-maximization of crude import quotas will prevent the normal Q4 crude import surge, the risk of a quota expansion and following rise in crude purchases remains. By late December, an announcement on the 2021 crude import and product export quotas should serve as an early indication of the nation’s expected appetite for crude.

Crude Storage and Distinguishing Between Demand and Imports

The key to China’s ability to buy voraciously on market selloffs has been dependent on their seemingly ever-growing storage capacity. The lack of official data on oil inventories in China provides both speculative risks and opportunities. Using Ursa Space Systems satellite imagery data, which showed around 425 million bbl of crude storage available in late March, it was clear that the door was open for a surge in Chinese imports and inventories regardless of domestic refined product demand.

According to Ursa, China’s crude inventories hit a record-high of 991 million bbl in the week ending October 1. This follows official data showing Chinese crude imports rising month-on-month for the first time since June in September. At 11.8 million bpd, crude imports were reported rising 5.5% from August and 17.5% year-on-year. With the rise in imports outpacing the rise in actual demand, stocks pushed to new highs. Even after a slight drop in crude stocks in the week ending October 8, Ursa reports that inventories have risen nearly 91 million bbl since mid-May.

Ignoring Chinese crude stock builds due to their opacity and the lack of official data leads to vastly overestimating the draw to global oil inventories in recent months. The shifting of oil inventories from markets with data transparency in the West to China is only bullish to the degree that these volumes are pushed into strategic rather than commercial reserves. With commercial stocks swelling according to Ursa data, it is clear that a large volume of crude purchases have merely been brought forward in time.

In early May, we concluded that China had no chance to meet the U.S. energy import obligation laid out in the Phase 1 trade deal. And with a U.S. presidential election approaching amid a recession, we called for further escalation of hostilities and U.S.-China trade tensions throughout the year. With the U.S. presidential election now just weeks away (and with both party’s candidates keeping up the rhetoric against China) we have not been disappointed in our outlook.

Official trade data for August that was just released from the U.S. Census Bureau show Chinese purchases of U.S. energy commodities rising for a second-consecutive month in August. At $756.8 million of U.S. crude exported to China in August, this marked the strongest month of U.S. crude purchases since May and was up $26.4 million from July. Strength in U.S. propane exports to China in August was offset by weakness in butane, methanol and petcoke volumes. Total U.S. energy exports to China rose to $968.4 million on the month, up $12.8 million or 1.4% from July.

Over the first eight months of the year, China has only purchased $4.5 billion of U.S. energy commodities according to official trade data. This accounts for just 16% of the $28 billion 2020 obligation agreed to in the Phase 1 trade deal. While we know—based on higher frequency export data—that Chinese purchases of U.S. crude surged in September, we are confident that China will continue to fall well short of the terms of the deal. Even if China increased monthly purchases to 4 times that of their 2020 high set in July of $1.1 million in the September-December period (a ridiculous hypothetical) China would still fall $1.6 billion short of their 2020 obligation. 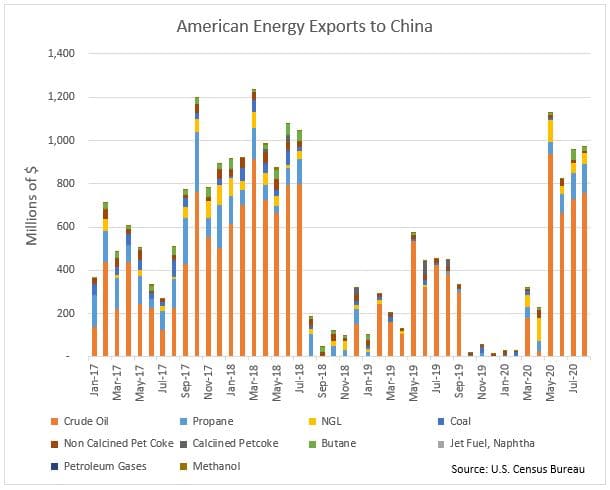 It is unclear what will come of the now-defunct Phase 1 trade deal under a potential scenario where President Trump does not win reelection. If President Trump wins, we believe the trade war will drag on, but we continue to believe that China will fail to live up to the terms of the trade deal for U.S. energy commodity purchases in 2021 just as they have this year.

China’s obligation to fulfill the 2021 leg of the Phase 1 trade deal ostensibly declines as the likelihood of a Biden presidency rises. Biden has attacked the Phase 1 deal as an “unmitigated disaster.” Messaging has been mixed from the Biden campaign given that he is trying to walk a fine line of playing to the U.S. public’s growing distrust of China, while also seeking to remedy economic pain by lifting the Trump administration’s tariffs. Although Biden’s presidency would likely bring an end to the unilateral trade war against China as we have come to know it, he is still seeking intellectual property concessions from China that are unlikely to be resolved anytime soon even amid a more globally diplomatic and multilateral approach.

There has been much talk about U.S.-China economic decoupling throughout 2020 as political reactions in the U.S. to COVID-19 have sparked an interest in onshoring the industrial supply chain rather than depending on global markets. However, amid this political rhetoric (and following years of tariffs by the Trump administration and the Phase 1 trade deal) the U.S. trade deficit has soared to 14-year highs as of August.

While discussions of onshoring industry are likely to drag on regardless of who wins the upcoming presidential election, it is important to distinguish between policy potentials or political rhetoric and reality. At this time, the decoupling that is most pertinent to the global oil market is not the potential future breakdown of global trade, but the already apparent decoupling of economic growth in China and everywhere else in the world.

Given that China is a net-exporter of refined products, demand weakness outside of China will eventually catch up to Chinese refiner’s appetite for crude after months of binging at low prices. China should push a large volume of refined products on the market in Q4 if they keep with their seasonal trend, which will suppress refining margins and crude demand elsewhere around the world, unless global product demand stages an unexpected Q4 recovery. Refining margins in Singapore are up from their September lows, but are down 60% from their highs in July and are down 84% from year-ago levels. Strengthening gasoil refining margins in Singapore will be one of the earliest indicators of a coming recovery in crude demand in Asia (outside of just China) and a product market that can handle an increase in refined product exports from China. But we’re not there yet.