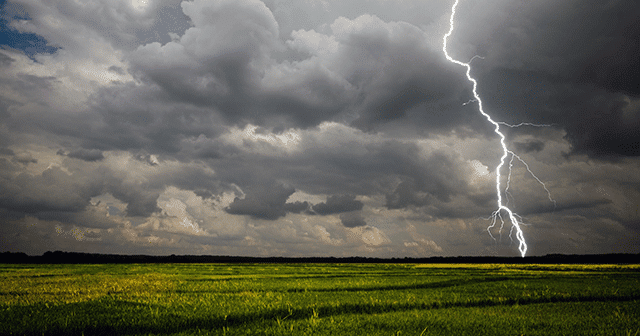 March 20th, 2021, is officially the first day of astronomical spring in the Northern Hemisphere because it coincides with the vernal equinox. Meteorologists use March 1st to ring in the new season, making it much easier to record and compare. No matter which date you use, however, it’s severe springtime weather season.

This transitional season’s perception as nothing but sunshine and budding flowers does not convey the whole story. Here are some reasons not to underestimate severe springtime weather, as well as some insight into exactly why these extreme weather events happen.

Ice and snow do not end March 1st, or March 20th, for that matter, but it certainly does wane with far fewer events as what used to be cold enough for snow is now rain.

The increasing temperatures also spell another phenomenon, thunderstorms. True, thunderstorms can and do happen all year long, but their prevalence in winter is subdued for one primary reason – the sun.

In the winter season, the sun is at its lowest in the sky with the least daily duration. With less sun comes less differential heating. Thunderstorms develop and thrive on differential heating or the difference between two pieces of air. The difference between a warm surface layer and a cold upper layer causes the warm air to rise. The greater the differential, the greater the upward speed of the parcel of air. When air rises quickly, it causes air particles to rub together more vigorously. This creates charged particles of air, which do not like to be charged. Given a significant amount of energy, it discharges as lightning, the definition of a thunderstorm.

This is much like rubbing a balloon in your hair. The faster and the harder you rub the balloon against your hair, the more static electricity you produce. If you touch a grounded metal object, like a door handle, you can see the electricity flow from your finger to the door handle. Please turn off the lights once and give it a try!

Thunderstorms often occur in the spring because of this differential heating. Cold air still exists near the North Pole and occasionally flows south. In contrast, the air toward the Gulf of Mexico is getting warmer. This occasional clash between an arctic air mass and a tropical one provides a significant difference in temperature that fuels thunderstorms. These springtime storms’ intensity can range from scattered and brief single-cell thundershowers to tornado-producing supercells and from narrow lines of severe wind, hail, and rain to widespread complexes.

Mark Twain once waxed philosophic about springtime weather: “In the spring I have counted one hundred and thirty-six kinds of weather inside of four and twenty hours.”

Midwesterners, especially, know how he felt. The most common “restless weather” we encounter during spring is thunderstorms, which we can count on to occur, but their strength varies.

The 2021 spring season is controlled in part by the sea surface temperatures in the Equatorial Pacific Ocean. Temperatures are currently below the average and have been since the summer of 2020. This is referred to as a “La Nina.”

During La Nina, there is a greater tendency for heat to build more than expected in the Southeast U.S. and cold to come down from Canada into the Plains. This produces the clash of air masses that make thunderstorms and can lead to significant severe weather outbreaks, which leads us to the next point.

Tornadoes Are Back In Season

Though this severe weather type may occur at any time of year, these storms occur most from April through June, essentially during astronomical spring. They impact a small footprint of the landscape, but their devastation can be swift.

In the Plains and Midwest, most people are familiar with and have a healthy fear of tornadoes.

Fortunately, most springtime tornadoes are small and don’t cause much damage. A handful of tornadoes every year, though, are strong enough to level entire neighborhoods.

Tornadoes occur in strong thunderstorms when there is strong instability and when upper-level winds help organize these storms. However, the actual mechanisms for how tornadoes form are mostly a mystery. This makes it hard to say if a particular thunderstorm or even set of thunderstorms will produce tornadoes, leading to short warning times. These quick warning times may be the most dangerous thing about a tornado – you cannot always see it coming. Forecasters have become better at detecting and communicating risk, but it is not easy, nor is it perfect.

The increased risk for severe weather events in 2021 may increase the risk for tornadoes, though there is no direct correlation. However, the costliest tornado outbreak on record occurred April 25-28, 2011. 2021 is another spring that followed a La Nina winter. Three hundred and sixty confirmed tornadoes produced over $10 billion in damages and 324 deaths from Texas through the Ohio Valley and from the Southeast through the Northeast.

But most damage and deaths due to weather occur from floods. As the weather warms and temperatures rise across the country, so does the amount of water in the air. Thunderstorms turn the water vapor back into a liquid or solid where it falls to the ground as rain and typically very heavy.

When thunderstorms persist in an area for a long time, or a line of thunderstorms continues to move across a particular area, the amount of water reaching the surface can be too much for the ground to handle.

This extended thunderstorm period causes flash floods, a quick increase in surface water that can devastate farmland, businesses, and transportation. They can be deceitful in how deep they are, leading people and cars to be swept away by swift currents.

If the ground is already fairly saturated with water due to snowmelt in the spring, flash floods could occur more likely. Fortunately for spring of 2021, the amount of snow has been below average, and most areas across the country’s midsection show below normal soil moisture, reducing the risk.

Each storm has its unique composition of elements that contribute to the risk of property damage and physical injury. The best way to mitigate the extent of damage from these springtime events lies in proper preparation.

There are meteorologists around the United States dedicated to predicting (and therefore mitigating the damage from) severe springtime weather events.

Here is a glimpse into how they gauge risk and communicate with the public:

Throughout the early stages of severe weather development, meteorologists may communicate a “watch” out. A watch means that current conditions are favorable for dangerous thunderstorms, tornadoes, or flooding to develop over the next couple of hours. Once an alert is issued, the public should check frequently for urgent weather updates.

If conditions culminate into actual severe weather, a “warning” may be communicated out, indicating that extreme weather has been spotted in the area. Specific locations may be in the direct or adjacent path of the storm.

Because of severe springtime weather’s unpredictability, the area of concern for the warning may be somewhat larger than the actual storm pattern in case of any change in direction or severity.

Regardless of the alert, meteorologists always advise that you have safety plans in place. For example, seek shelter and secure belongings in the event of a severe storm. Securing belongings is crucial. This avoids the risk of debris becoming missiles that cause even more significant damage and injury.

Springtime is primarily perceived as a joyous, transitional season, best depicted by blooming flowers and sunny weather. But ask any meteorologist. They’ll warn you how common severe springtime weather events – including thunderstorms, tornadoes, and flooding – are expected due to cold winter temperatures warming and creating a restless atmosphere.