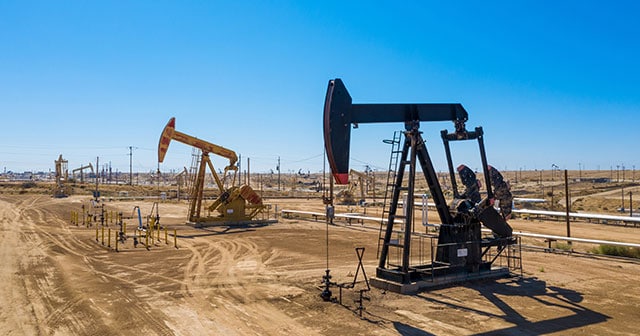 Crude prices have pushed higher this week despite Wednesday’s bearish fundamental data release by the EIA. So far this week, the plummeting U.S. dollar has overshadowed fundamental data which point to rising U.S. crude production and renewed weakness in demand amid the weight of the growing COVID-19 pandemic. Even with surging refined product exports and weakness in refinery runs, product stocks are continuing to build. With peak seasonal gasoline demand just around the corner, the outlook for refinery runs looks bleak. We believe further weakness in the U.S. dollar can lead WTI higher from here, but upside is limited given persistent weakness in underlying fundamentals.

Crude Production and the Adjustment Factor

Large gaps between EIA and real-time ship tracking data for crude net imports in recent weeks have allowed for explainable volatility in the adjustment factor that continued to point to a recovery in domestic crude production. EIA data for the week ending July 17 provided further confirmation of this outlook.

We do not believe the entirety of this 857,000 bpd is attributable to a rise in domestic production. Vessel tracking data point to the EIA underestimating net imports of crude by a significant margin during the week, which also necessitated the positive adjustment factor. Given the size of the adjustment factor, and that the EIA raised their official production estimate by 100,000 bpd to 11.1 million bpd on the week, we believe that actual domestic crude production is already closer to 11.4 million bpd.

EIA data show that U.S. refiners have been prioritizing production of gasoline over diesel and jet fuel as one might expect given the relatively swift recovery in gasoline demand this summer. Refiner and blender net production of gasoline has increased 3.1 million bpd from the low set in the week ending April 3, while distillate fuel oil and jet fuel production is still down 220,000 bpd and 6,000 bpd, respectively from the same period. In the week ending July 17, refiner and blender net production of distillate fuel oil was its lowest for the seasonal period since July 2012. 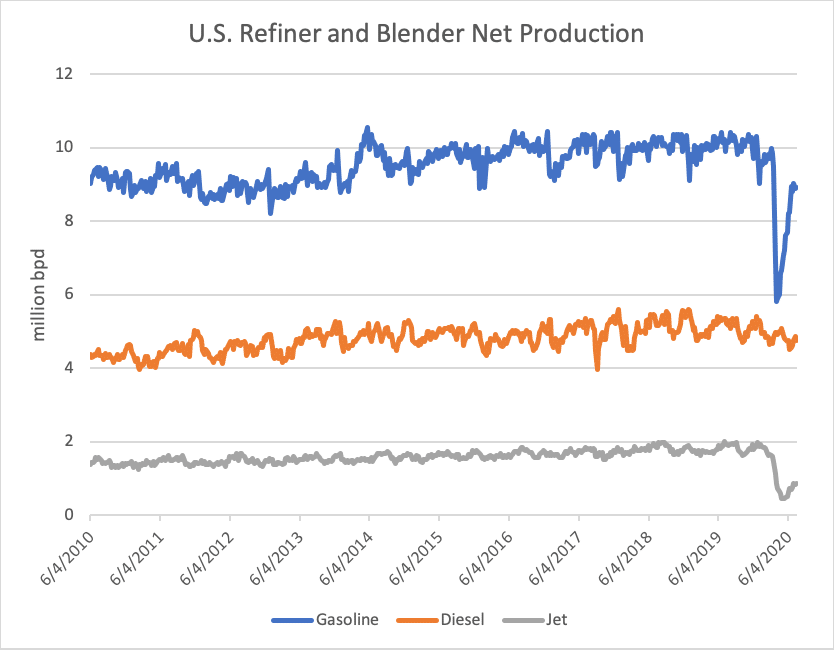 High frequency data from DTN show gasoline and diesel demand peaking around the 4th of July holiday and then falling to a lower plateau so far this month. This aligns with the EIA’s own demand proxy, product supplied, which shows demand for distillate fuel oil and gasoline turning lower from their late June/early July peak. The four-week moving average for total product supplied declined for the first time since the final week of May in this week’s EIA data release, emphasizing a broader trend of declining product demand following the holiday. 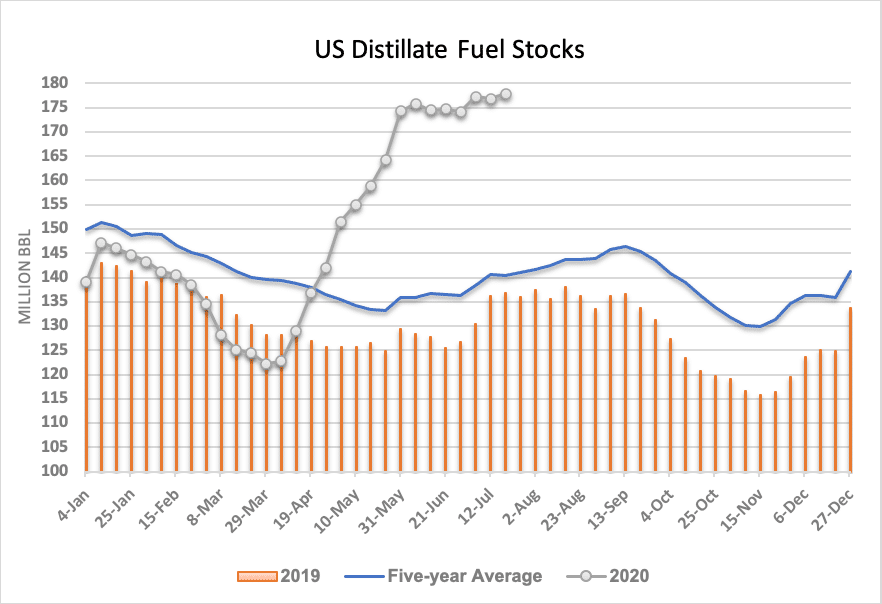 Further builds to distillate fuel oil stocks despite surging net exports of the fuel, and continued weakness in refinery runs reflects the sharp economic contraction weighing on domestic diesel demand as well as U.S. refiners blending the jet fuel pool into the diesel stream amid the pronounced downturn in air travel and jet fuel refining margins.

Domestic crude production is pushing higher just as refined product demand and refinery runs are plateauing. This continues to emphasize the importance of the global market’s ability to absorb excess U.S. crude and refined products as we have discussed in recent weeks. We believe further weakness in the U.S. dollar can lead WTI higher from here, but that WTI is likely to find a confluence of fundamental and technical resistance as it nears the $44.00 bbl level.