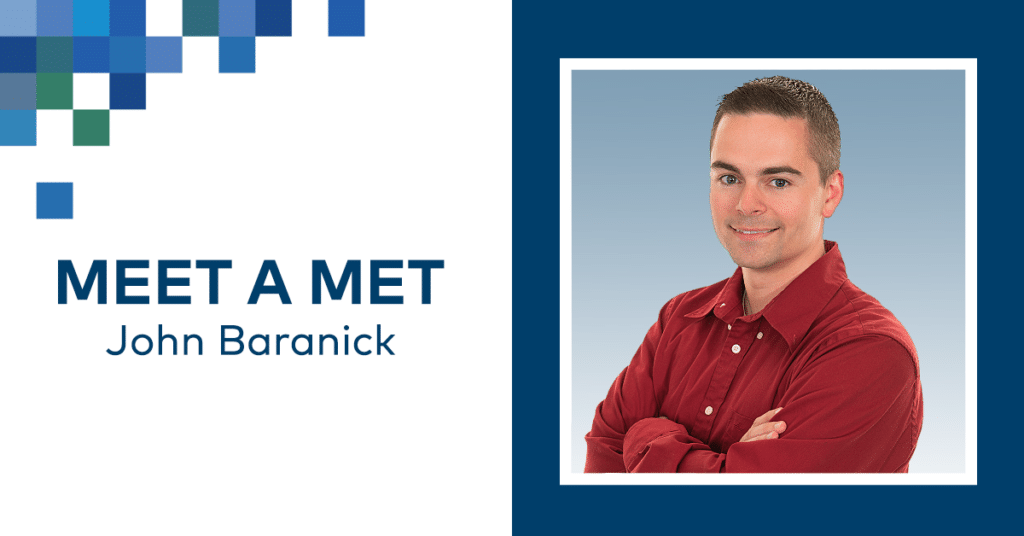 Has been with DTN for 6 years

How did you end up working at DTN?

I had a classmate working here and she always told me about what a great place this was to work. I interviewed in 2008 (Great Recession) but the client that my position was meant for backed out. After 3 years of searching I thought that my dreams of being a meteorologist were dead. But out of the blue, I got a call from the HR department asking if I was still looking. If it were not for my friend, who put in a word for me, I likely would not be here today.

What is your favorite part about being in MetOps?

What is the most challenging part of being in MetOps?

Large East Coast winter storms. We have a pretty good customer contingency in the Northeast and when significant storm systems occur, particularly in the winter, it gets really busy. Time management is a top priority in these situations.

A tornado went just north of town when I was in college. My roommate and I went out and chased since it was so close. We saw it drop to the ground and followed it for about a mile. It then went across the road we were on, destroying 2 houses. We stopped watched it as it tore through a couple of fields. We were happy to find that the families in those houses heeded the warnings and were safe.

There was a coastal system that was going to impact the state of Massachusetts but there was a dramatically sharp transition line of rain to snow over eastern portions of the state. Cape Cod was likely to get all rain and the rain/snow line was expected to go right along I-95 through Boston. This made the forecast extra tricky as a small waver in the position of that line would mean an inch or two of sloppy wet snow or 10+ inches. It was especially difficult trying to get our clients to understand the risks and the potential bust from the storm depending on location. Extra care and attention was given to specific wording so that the client understood these, several days out and extra forecasts were issued updating them on the situation. Overall it worked out really well and the client referred others to our services.

Excitement might not be the best wording considering the damage they caused, but I was on shift for a Moderate Risk day from the Storm Prediction Center. Multiple long-track tornadoes ripped through Oklahoma. We were following radar, media, and storm chasers as they reported with video. It was intense and incredible but seeing the damage they were causing was heartbreaking.

What is one weather myth you always correct people on?

Heat Lightning…there’s no such thing. I remember my grandpa talking about it and was bummed when I found out it wasn’t real. It’s true that hotter days are correlated with increased chances for thunderstorms, but hot temperatures cannot produce lightning. It’s just a product of thunderstorms being so tall that you can see the lightning from significantly far away, but can’t hear any thunder.

Raindrops aren’t shaped like tear drops as they fall from the sky, small ones are spherical and larger ones look more like a thick pancake. Rainbows can happen in all kinds of weather including fog and clear (and very cold) days. Much of the rain in the summertime actually comes from snow 20,000-30,000 feet off the ground that melts on its way down.

I have 3 boys, a five-year-old and one-year-old twins. The house is always a mess but it’s a lot of fun watching them interact with each other and growing up.