Shipping companies can reduce time on voyage planning and improve the quality of the route, with the weather optimized route network. It’s an ECDIS route network that plans port-to-port routes, including navigational constraints and port approaches.

The Weather-Optimized Route Network optimizes passage planning, reducing time on voyage planning, and improving the quality of the route. It is one of three key components for optimal weather routing, alongside master mariners and weather data.

Increase ship safety, save fuel, save time and unburden captains with SPOS.

A brief history of weather routing

In the early days of modern shipping, master’s relied on Radio Operators (Sparks or Sparky) to receive some information about the weather on the ocean where you were sailing. If you were lucky, you could get one weather bulletin per 24 hours.

A few decades later brought the weather fax to shipping companies. Various land- based weather offices issued a weather bulletin for the area they covered. You would be able to receive 2 to 4 updates per day, but that also was highly depended on your location at sea: the closer you got to a coastline, the bigger the chance that you would receive a readable bulletin. These bulletins and faxes produced static overviews of the weather patterns but contained no prediction whatsoever.

Two decades ago, Masters of oceangoing vessels were introduced to new onboard routing software. This was able to optimize their voyages by making use of specific onboard software, such as SPOS, which contained weather information. The weather information used by the software was not static; it moved and became forecasts! Now the mariner could play the time bar scrolling through the coming days and see how a predicted weather system would move over the big oceans.

Next versions of the application included an algorithm helping to find an optimized route based on weather and currents, with a represention of the vessel’s position on a particular day and time in the future. Weather overlays showed you the weather conditions at and around your anticipated location at any given time. A Master equipped with such a system could plan a voyage with precision and avoid adverse weather.

Embedding the Route Network within SPOS is a revolutionary feature, which treats large oceans and coastal areas as broad highways. This insight gives the Master the possibility to navigate safely from A to B. This Network was created and is continually being refined, by Master Mariners. It enables safe navigation around the globe, with 20-meter safe water depth and a 1-mile safe distance from coastlines. The hyper-accurate Route Network safely navigates through shallow areas and mid-sea obstructions.

The incredible value of this “Weather- Optimized Route Network” comes from opening the larger navigable waters for routing. Similar to your car, where your GPS navigation routes you around a vehicle accident by recommending an alternate side road, the Route Algorithm finds the best way around bad weather in open oceans. It then connects to the Route Network in near-shore waters to find safe navigable routes from/to ports of departure/destination.

How does the weather- optimized route network work in practice

The green line in figure 1 shows the boundary of the Route Network. The entire sea
area outside the green-lined border of the continent is freely navigable. The algorithm will suggest the most optimum route to navigate through this area, taking weather (speed loss) and currents/tides into account.

The Route Network also contains the Traffic Separations Schemes (TSS) and guides your passage safely through these areas (figure 2), or if the Mariner chooses to close these passages, the routing algorithm will recommend a route wide around these areas (figure.3). 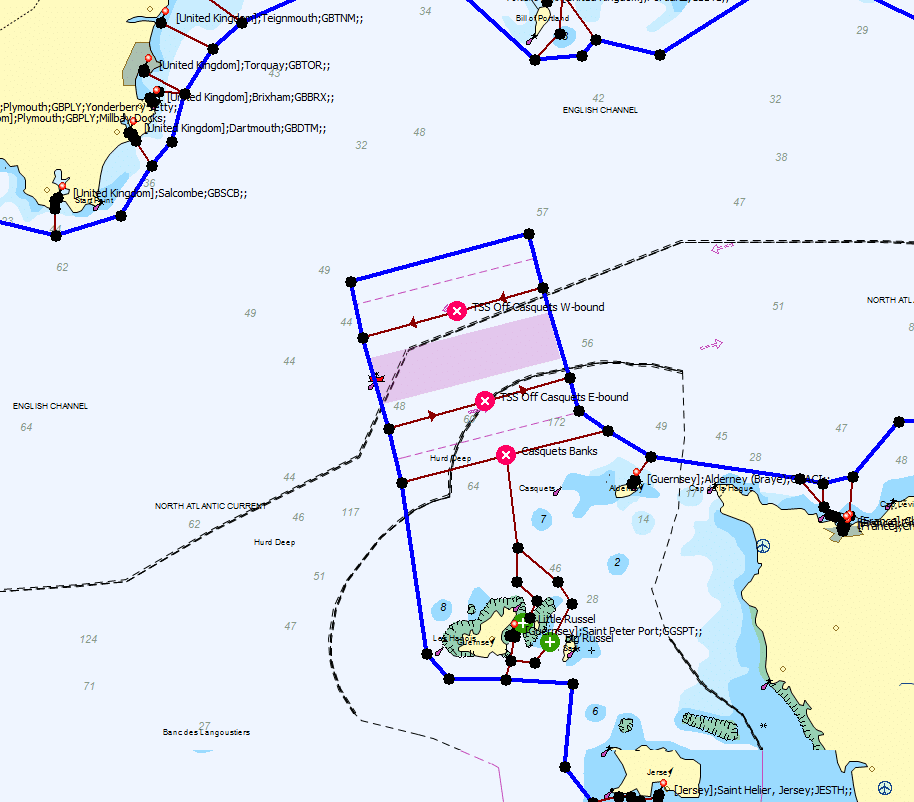 No-Go areas and areas to be avoided (figure 4) are also embedded in the Route Network to be excluded from the routing algorithm recommended route.

The entire ENC database is captured in the Route Network, enabling safe surface navigation. Also, the Network is kept up to date and adjusted for Notice to Mariners (NtM’s) changes.

By making the free ocean and seas as broad as possible, the algorithm can make nearly unlimited calculations. Almost, because due to the embedded Via-points or Via-areas, the Master can easily block a passage and force the system to make calculations via other routes that the algorithm discards under normal conditions.

For Example: by closing the Suez Canal (figure 5 and 6), you force the algorithm to calculate the passage from NW Europe to Singapore via the Cape of Good Hope. 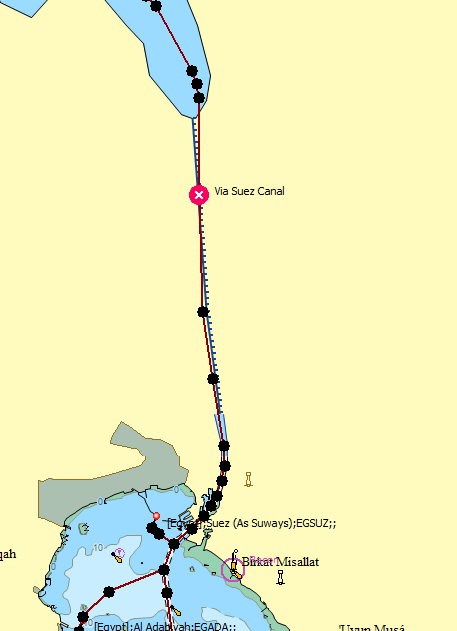 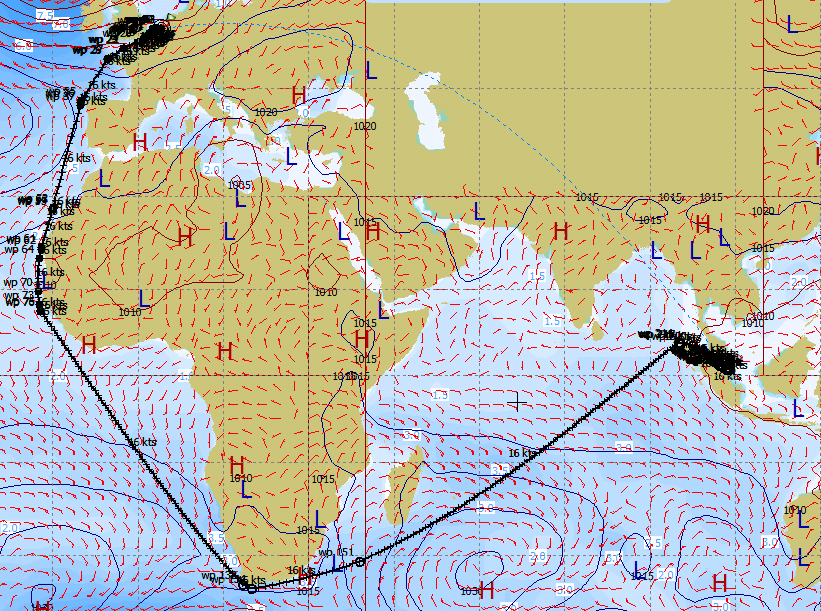 By opening the Suez Canal (figure 7 & 8), the calculation is made using this canal (also against reduced speed and by building in a stop upon arrival). 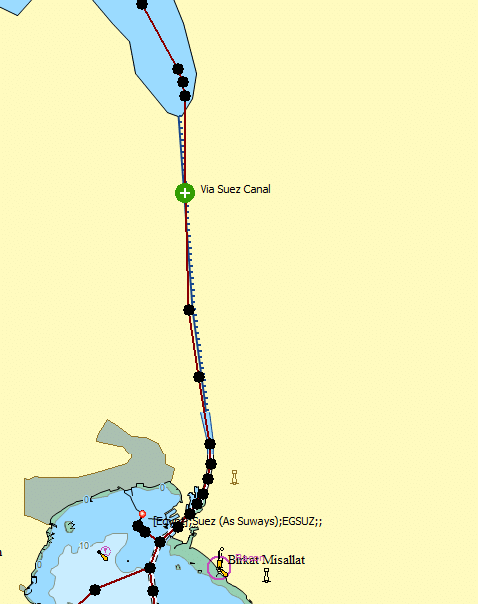 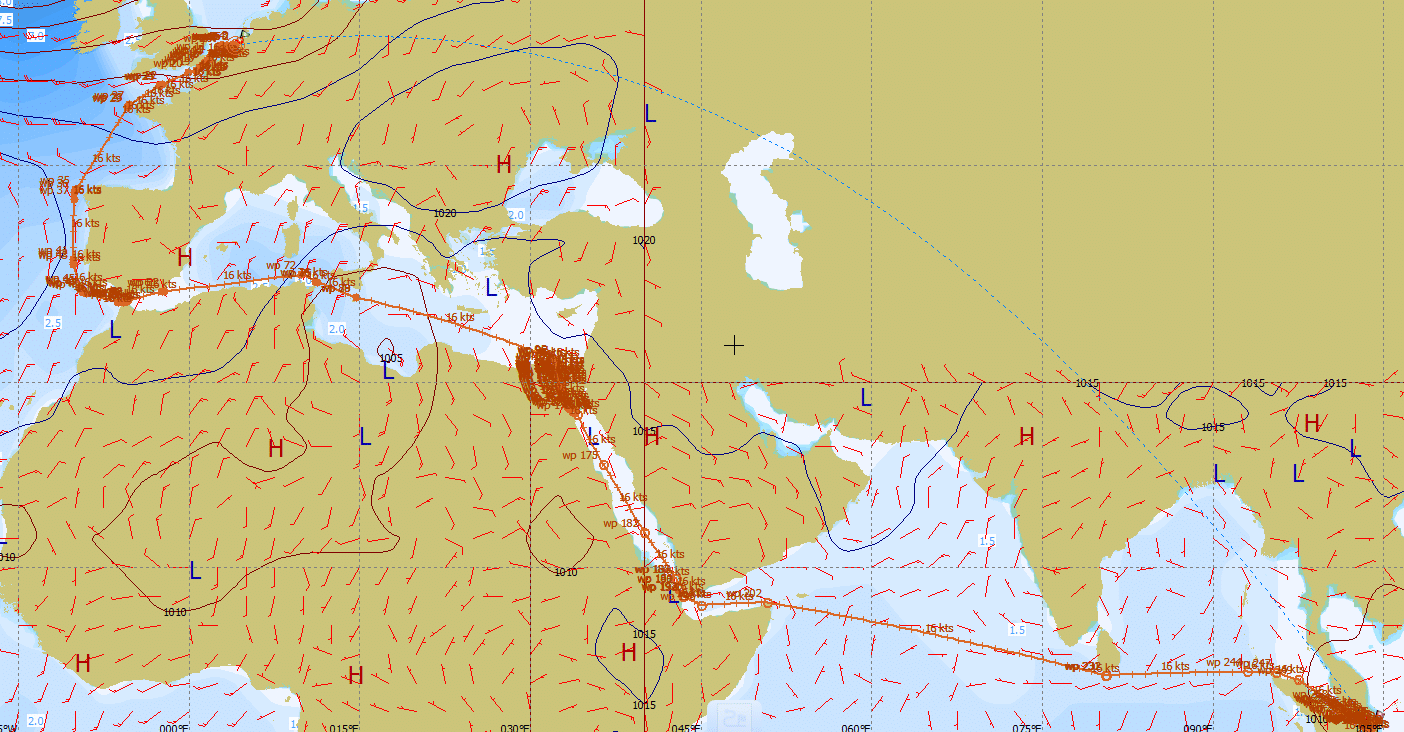 The algorithm calculates along the preset passage as inserted by the Master or Officer in charge of the Voyage Planning. By closing a journey, the algorithm starts searching for alternatives, which can sometimes be far away from the initially intended route. However, this new route suggestion is as economical as possible, taking weather conditions, currents, and tides into the calculation. This illustrates the fantastic strength of the algorithm, helping Masters and Operators safely and economically navigate the world’s oceans.

The Weather-Optimized Route Network is another key component for optimal weather routing.

Increase ship safety, save fuel, save time and unburden captains with SPOS.