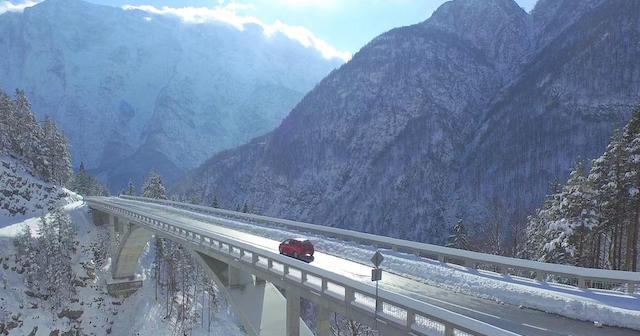 As the cooler temperatures of fall start to overtake the summer heat, the forecasters at Iteris are busily preparing for the upcoming snow and ice season, commonly referred to as winter. While snow and ice-covered roads are of particular concern to the winter maintenance community, road and bridge frost can also create a slick situation on the pavement.

But under what conditions is road or bridge frost most likely to form? Let’s discuss a few different ways.

In simple terms, frost will develop on road and bridge surfaces when the dewpoint temperature becomes warmer than the surface temperature. The surface in this case is the roadway or bridge deck and not simply the air temperature at the Earth’s surface. Clear nights with light winds help to create the proper conditions for development of road and bridge frost, but there are other conditions that can lend themselves to frost formation.

If an area that has seen an extended period of sub-freezing temperatures quickly warms (due to the arrival of warm/moist air), frost can form on the roadway because the pavement temperature will respond slower to the warm air, keeping the pavement cooler for longer. Road surfaces are slower to respond in this situation because the road’s subsurface, which is likely still below freezing, will help counteract the warming air by cooling the road from beneath. In this case, bridge decks are less likely to become frosty as their temperature can moderate more quickly to the warming air temperature. Because of the need for a prolonged period of sub-freezing temperatures, this particular instance of frost typically occurs from the middle portion of the winter season through early spring.

2. Why Bridge Decks Are Different

During the fall when subsurfaces are warmer, the opposite pattern can be seen. Bridge decks, without a warm subsurface to moderate cooling, are more likely to see frost develop. Roads on the other hand, with a warm subsurface, will stay warmer for longer, delaying the onset of frosty conditions.

While there will be some instances when frost will form regardless of the conditions, these guidelines are a good starting point for understanding which kind of frost is most likely during each point of the season.

4. The Best Course Of Action

When conditions are favorable for frost, many agencies will pretreat using a salt brine, which can be done during daily operations. Salt brine, among other treatment options, lowers the freezing point of the road surface while also absorbing some moisture that could adhere to the road. The result is more traction for vehicles and a safer drive. If agencies are unable to diagnose frost situations and effectively treat them, frosty roads could become as treacherous as unplowed roads or a refreeze situation.

Luckily, maintenance decision support systems can assist agencies not only in determining when frost is likely to occur, but also by recommending how to best deal with a frosty situation.