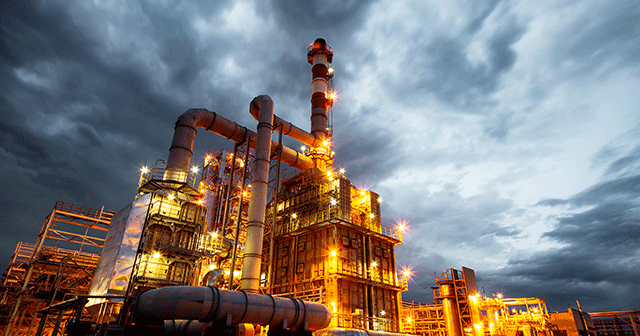 Crude prices surged higher on Wednesday despite the ongoing uncertainty as to who will ultimately win the U.S. presidential election. Oil and gas producers in the U.S. appear to have secured some favorable wins in state elections like Texas, Alaska and Louisiana, but all of these political developments are unlikely to have a material impact on supply and demand balances anytime soon. For global oil producers and prices in the near term, the story remains centered on demand and COVID-19. Just as global diesel demand has begun to perk up, gasoline demand has once again tumbled lower. The global oil market desperately needs a simultaneous recovery in demand for the light, middle and heavy ends of the refined barrel to stage a sustained price recovery.

During the March-April period amid the initial outbreak of COVID-19 and lockdowns, diesel refining margins held up while gasoline margins plummeted. As we moved through the spring and early summer, the tables turned as the global economic contraction caused diesel demand to plummet while passenger vehicle driving activity recovered, pushing gasoline refining margins higher. And now, just as global demand for diesel has begun to recover, gasoline demand is falling once more as another wave of the virus and government quarantine efforts take hold across the Western Hemisphere.

Another bright spot in an otherwise gloomy global market for refiners can be found in shipping fuel. Even though IMO 2020 regulations have largely been forgotten this year amid massive oversupply of crude and products, the global sulfur cap for bunker fuel has clearly provided a boost to refiners’ bottom lines in recent weeks. VLSFO refining margins in Singapore hit six-month highs this week as a rebound in global trade and freight shipping has come amid low output of the fuel given the weakness in refinery runs. But this too may be short lived. While consumers in the west and goods exporters in the east have bounced back, whether or not this strength can be maintained will ultimately be decided by the economic health of buyers of these goods in the weeks to come.

For refiners that had been focused on lightening crude slates and boosting gasoline production throughout the summer, this must feel like deja vu. An industry that had worked to maximize gasoline yields in recent months and had planned to continue to run lighter and sweeter crude slates into the fall must now once again reposition to take advantage of diesel margins. The longer this relative weakness in gasoline demand is sustained, the larger the impact for crude quality spreads globally. Heavy sour crudes look to benefit while demand for light grades suffer.

The U.S. and Europe

Over the past week, Germany, France, England and Belgium all announced new COVID-19 lockdowns amid surging case counts. As we discussed last week, driving activity across Europe was already on the decline before the lockdowns began as case numbers pushed higher. While there is an initial surge in driving activity in the day or two prior to new lockdowns as individuals seek to load up on groceries, have their last meal at a restaurant or try to escape city centers, it is unquestionable that gasoline demand in Europe is moving sharply lower. With a contraction in broader economic activity in the Eurozone, diesel demand is likely to follow.

In the U.S., a need to replenish inventories of goods throughout the economy after months of supply chain disruptions and a rush to get consumer products into inventory before the Black Friday and holiday shopping season begins has given a lift to diesel demand. Using the four-week average of the EIA’s demand proxy for distillate fuel oil, we can see that product supplied of the fuel hit its highest since late March in the week ending October 23. 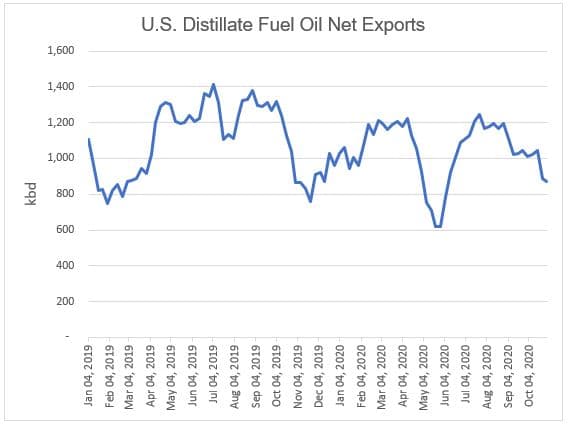 However, at the same time, gasoline demand based on the EIA’s product supplied has clearly been falling for weeks. At 9.5 million bpd in the week ending October 30, the four-week moving average for gasoline product supplied fell just below 9.5 million bpd. On a year-on-year basis it is clear that more than just seasonality in demand is at play. After narrowing to 617,000 bpd below 2019 levels in the week ending October 2, the slide in demand over the past 6 weeks has now brought the year-on-year demand shortfall for gasoline back above 1 million bpd. Using this four-week moving average measure of implied demand, gasoline demand is now its weakest relative to year-ago levels since the final week of June.

China has clearly faired far better economically than other nations globally in the months following their initial COVID-19 outbreak. Diesel demand in China has benefited from both stimulus spending on infrastructure buildouts as well as their swift recovery in industrial activity and trade. But China’s relative outperformance alone was not enough to lift global refined product prices and refining margins this summer.

Throughout September and October, most other emerging economies in East and Southeast Asia have also reported declining COVID-19 case counts. These nations continue to report an absence of the second and third waves of the virus witnessed across much of the West. India has been a major exception to this rule in recent months, with cases surging into mid-September. However, with case counts trending steadily lower in India since that time, fuel demand is on the rise once more.

Three nations central to pre-COVID global oil demand growth expectations moving into 2020 – China, India and Brazil – are now all reporting strength in fuel demand relative to the U.S. and Europe. According to data from Indian Oil Corp, diesel sales by the country’s three state fuel retailers rose 6.6% year-on-year in October. Brazilian diesel demand, while not recovering as swiftly as China and India was last reported just 2% below year-ago levels.

Refining margins for low sulfur diesel in Singapore based on front month Dubai crude have surged 58% over the past 10 trading days. Strengthening refining margins in Singapore are one of the early indicators that we have been waiting on to suggest that the recovering demand in Asian economies is strong enough to support higher crude throughput at refiners across the continent and ultimately globally. But for now, it’s still too early to call. While diesel margins are up in Singapore over the past two weeks, margins are still below their early October peak and at $3.00 per bbl are still $15.54 per bbl (or 84%) below year-ago levels. 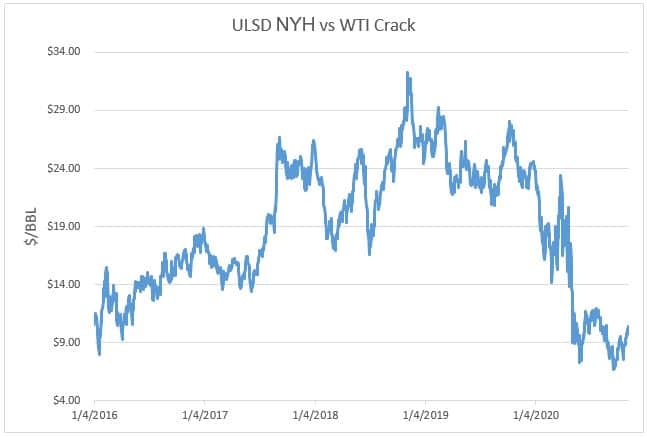 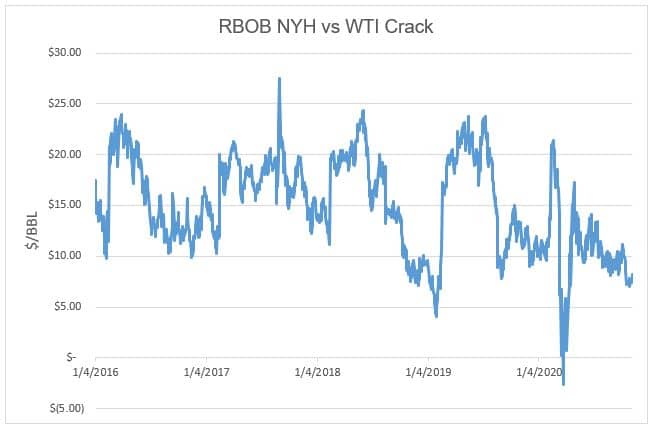 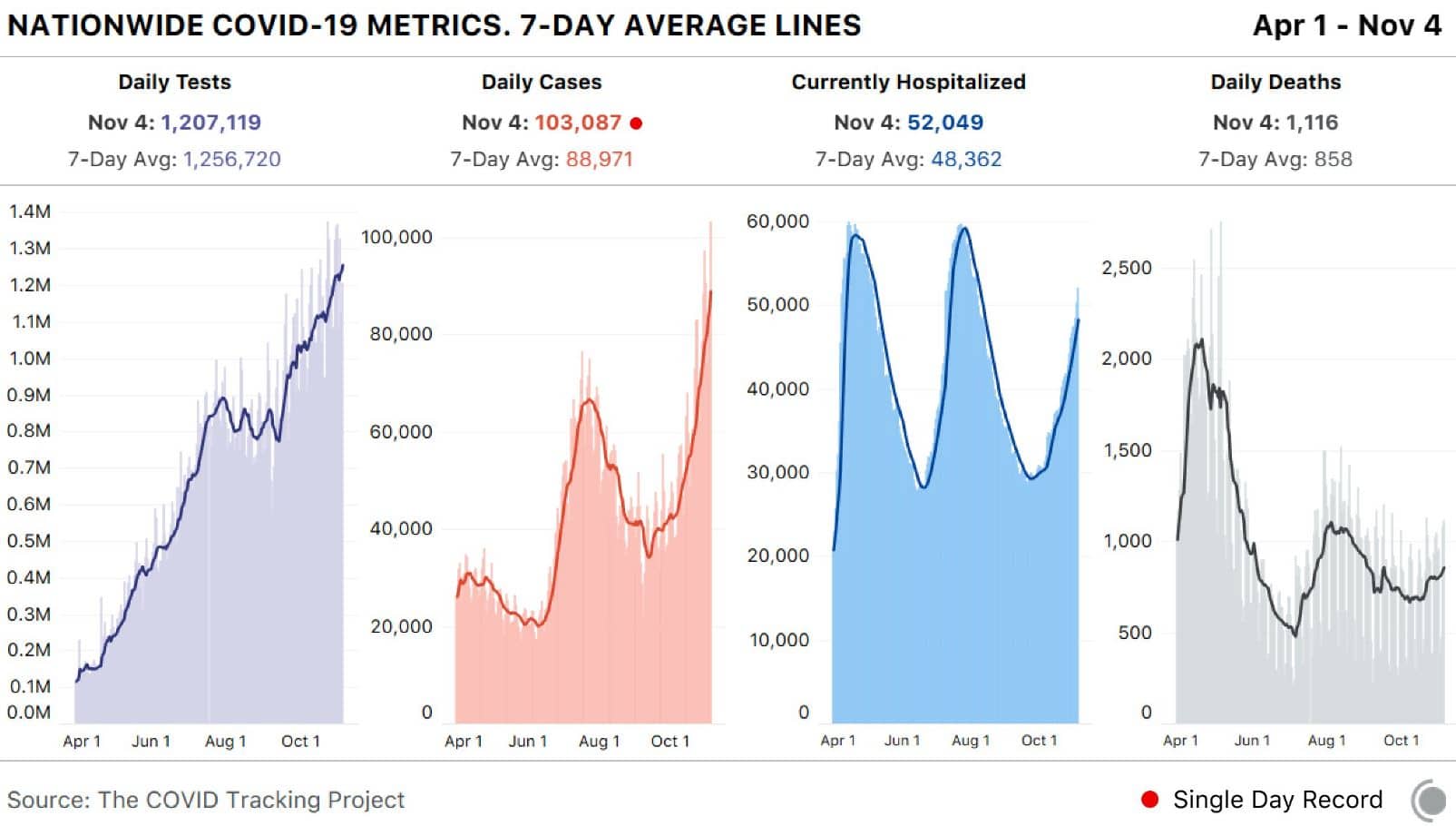 Like Europe, gasoline demand in the U.S. has already began to suffer regardless of the lack of new government-imposed lockdowns. As hospitalizations and deaths continue to push higher in the coming weeks, the odds of both new government lockdowns and the lasting global macroeconomic devastation catching up to diesel demand is on the rise.

This week’s EIA report continued to send warning signs to those bullish on both crude and refined products. Although Hurricane Zeta led to another crude stock draw, the devil was in the details. Gasoline stocks rose by 1.5 million bbl while distillate stocks fell by just 1.6 million bbl. This build in gasoline stocks and small draw in distillate fuel oil came despite refinery runs holding 2.2 million bpd below year-ago levels. Gasoline building and the small draw to distillate fuel oil amid such weak refinery runs emphasizes the degree of demand weakness. As such, the 3-2-1 crack spread based on WTI is down 50% year-on-year, down 17% month-on-month and down 2% week-on-week.

While many market commentators have been hyping the narrowing overhang of crude and product stocks in the U.S. in recent months, a sustained rally above the recent trading range is highly unlikely until demand expectations firm. A simultaneous rise in both gasoline and diesel demand is needed to incentivize crude demand at refiners to return to historic norms. As is evident by OPEC+ now rekindling discussions to withhold the oil production that they had planned to bring online moving into 2021, both crude producers and refiners are far from out of the woods yet.