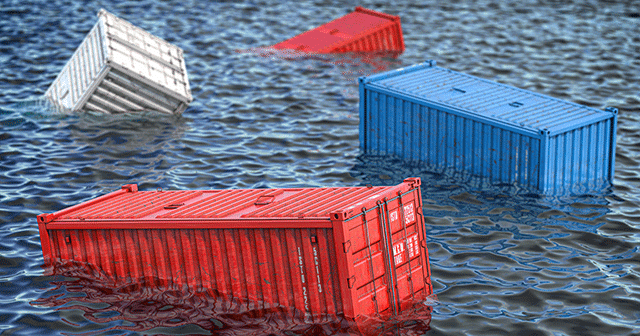 Considering how many containers are lost at sea, shipping companies and the shipping industry, in general, need practical tools to face this contingency. Data from the World Shipping Council Containers Lost At Sea – 2020 Update shows 1,382 shipping containers, on average, are lost at sea each year. In 2020, there were total losses of more than 3,000 containers, and of these, 1,816 containers were lost in a single incident.

DTN SPOS is a sophisticated decision supporting tool giving captains the ability to safely navigate around the kind of severe weather that could make container losses more likely. It does so by calculating and recalculating optimum routes allowing for enhanced safety and efficiency.

How containers get lost at sea

One of several reasons containers are lost overboard is that there can be failures in the lashing system. In one particular incident in the Pacific Ocean, a container ship on its way to Los Angeles lost 750 containers in rough seas.

The lashing systems used to secure enormous stacks of containers can consist of thousands of locks, rods, and other components—the greater the complexity of the system, the greater room for error. Obviously, no lashing system can be perfectly designed to completely prevent container loss if the weather scenario exceeds certain limits or is severe enough to exert specific pressures.

Charterers continually seek to optimize stowage for greater profits, regardless of their code of practice. Consequently, another common cause of container loss is non-compliance with limits for stack heights and weights as outlined in the ship’s Cargo Securing Manual. The CSM itself may make no provision for different stability conditions or other variables that can come into play, such as using non-standard containers.

Another reason for container loss at sea is the human error resulting from fatigued crew members. Between 2018 and 2019, approximately 226 million containers were shipped worldwide by sea. Massive levels of freight movement such as these can create pressure to over-schedule work crews leading to fatigue, freight damage and further strains due to capacity demand.

High waves on container ships can create unusual motion on deck and cause loosening of lashings. In the face of these conditions, if there is a failure to alter course to avoid severe weather, the results can be catastrophic.

In one well-documented case where containers were lost, rough seas with waves of 10 meters caused a container ship to roll more than 40 degrees. According to reports, the master anticipated bad weather, but feeling the ship was prepared, gravely underestimated the risk.

Poor ship handling in heavy weather can be a factor in container loss. A ship captain may try to outrun a typhoon or fail to heed warnings issued by the International Maritime Organization related to the dangers of parametric rolling.

A container ship can measure the equivalent of four football fields in length. It can have the capacity to transport 24,000 containers, with each container 20 feet in length. A ship like this is susceptible to parametric rolling.

Parametric rolling is a rare phenomenon that can cause containers to fall into the sea. When this happens, there is a feeling of sudden side-to-side movement with rapid acceleration at the top of the container stack resulting in forces almost impossible for the container stacks and their lashings to withstand.

The negative impact of lost containers is far more significant than merely the value of the goods they hold or the effects on a supply chain. For instance, the authorities could pursue ship owners for compensation after containers are tracked down and the damage caused is cleaned up.

Container loss has associated potential risks to a shipping company. The cost of locating the lost containers, combined with the environmental impact, can heavily impact the bottom line. If the containers were carrying dangerous cargo, the damage and resulting costs could be extreme.

Loss of trust with clients and the potential for punitive lawsuits are also factors to consider. Penalties can even be written into contracts for when goods do not arrive at the expected time.

The damage to a ship owner’s reputation in North America can be severe, even when losses occur elsewhere. Newsworthy pictures of a beautiful beach polluted by a broken container and the resulting loss of credibility would be catastrophic.

What can be done to avoid container losses?

Positive developments in recent years to tackle the problem of container losses include:

The MARIN (Maritime Research Institute Netherlands) has also undertaken a cross-industry initiative to investigate the science of lashing loads and acceleration forces. The joint industry project named “Top Tier” was initiated in response to a series of exceptional container loss incidents of the 2020-2021 winter season. The project, of which DTN is a participant, seeks to identify ways to ensure those incidents are not repeated.

In summary, guarding against container loss requires a combination of best practices. As we have discussed, stowage and environmental conditions play a big part, but there is also the vital consideration of the way a ship reacts to severe weather to be taken into account.

It works by combining accurate and detailed weather forecasting with hydrodynamic modeling and operational data from each ship to advise captains on the best route.

SPOS Seakeeping factors the vessel’s design and response to metocean conditions when determining the best route. Captains are provided with this information as early as possible to enable confident decision-making.

DTN SPOS is a sophisticated decision supporting tool giving captains the ability to safely navigate the globe with minimal fuel consumption and emissions by calculating and recalculating optimum routes and anticipating oncoming weather and sea conditions.

In this way, safety, efficiency, navigation, costs, port rotation, ETAs, speed ranges, and additional constraints, such as seakeeping, can be executed in the right balance.