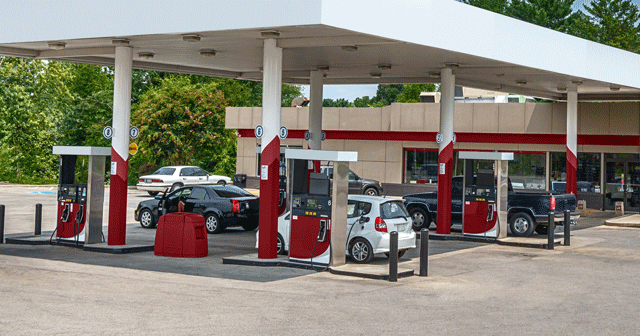 After racing higher in the second half of 2021 into early 2022, gasoline supplied to the U.S. market moved below the year-ago consumption rate in late March and stayed there through December, even as the U.S. economy expanded after contracting during the first half of 2022. If these were the only two statistics available, you might conclude recession has an enduring negative effect on the consumer psyche and behavioral response.

And maybe it does, but not in 2022 when consumer spending soared, and many even questioned if the U.S. economy was in recession for the first six months of the year, which is defined as two consecutive quarters when annualized Gross Domestic Product is negative. The national unemployment rate held near a 50-year low of 3.7% for much of 2022, and open positions were more than 10 million in ending October, according to the Bureau of Labor Statistics Job Openings and Labor Turnover Survey. 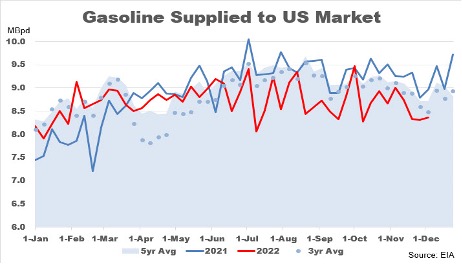 Gasoline supplied to the U.S. market

As we begin 2023, a growing chorus believes recession is an almost certainty sometime over the next several months as the U.S. Federal Reserve lifts interest rates to bring down inflation, with the only question remaining is whether it will be shallow or deep. The central bank is acting on its mandate from the U.S. Congress defined in the Federal Reserve Act of 1977 to ensure maximum employment, stable prices, and moderate long-term interest rates. To stabilize prices, the Fed must slow the economy, and increasing borrowing costs by lifting the federal funds rate is the hammer they have deployed. 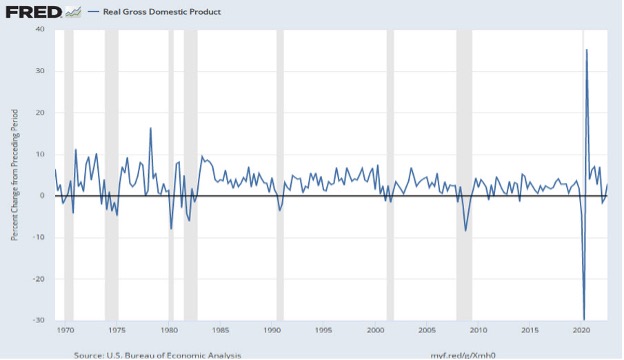 How high interest rates must go to bring inflation under control is still unknown, and data released in late 2022 suggests inflation will be more enduring than many had expected. While manufacturing and construction activity have contracted, along with other rate-sensitive industries, growth in the service sector continued to expand. Also working against the Fed was job and wage growth, which surprised the upside late in the year.

“Creating more slack in the labor market will require a further softening of aggregate demand, implying that the Federal Reserve will need to continue tightening financial conditions until it can be confident that the necessary labor market slack has been created. As a result, the unemployment rate is likely to rise, perhaps considerably, and job losses will probably be disproportionately concentrated among less-advantaged workers,” explains Karen Dynan with the Peterson Institute for International Economics, and Wilson Powell III of the Harvard Kennedy School in a December article entitled “U.S. job and wage growth beat expectations, making the Fed’s job harder.”

The Nobel Prize-winning economist Milton Friedman noted inflation was everywhere and forever a monetary phenomenon, meaning the more money in circulation, the higher prices will go. His refrain is ominous when considering there’s still a great deal of excess savings following the pandemic giveaways, which economists estimate were about $1.2 to $1.8 trillion in the third quarter, according to Harriet Torry of The Wall Street Journal.

“That buffer, combined with a strong labor market and rising wages, has helped consumers continue spending in recent months, even with inflation and mortgage rates at multidecade highs,” writes Torry in “As Savings Shrink, Spending at Risk.” 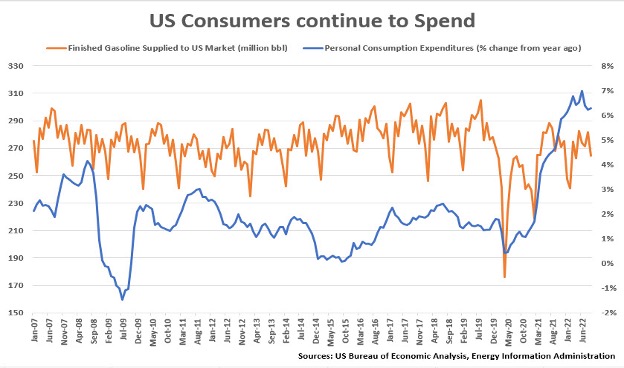 It will take several months, maybe longer, for the excess savings (which are disproportionately held by higher-earning households) to be spent, according to economists and investment banks. This poses the risk that the Fed will need to lift the federal funds rate beyond the 5% to 5.25% terminal rate some have come to expect to lower inflation closer to the central bank’s 2% target, causing economic hardship for some consumers and businesses.

In mid-November, the Federal Reserve Bank of Philadelphia surveyed 38 professional forecasters who viewed the forward-looking economic picture more pessimistically than in earlier surveys, seeing a “substantial risk of a contraction in real GDP in 2023.”

“However, they have substantially raised their probability estimates of a negative quarter for the following three quarters and predict a near-50% chance of a contraction in real GDP in any of the four quarters in 2023,” said the Philadelphia Fed.

Historically, an economic recession in the United States has slowed gasoline demand in two ways. First, job losses climb, meaning there are fewer workers commuting to and from the workplace. Second, for those who are still working, they tend to reduce their discretionary spending out of concern they, too, might become unemployed. Discretionary spending has had a close correlation with gasoline demand as consumers dial back purchases when they have decided they need to conserve, which means less time traveling to a store, including c-stores. Consumers also look to conserve on driving to save on gasoline costs by being strategic in their travel.

In our post-COVID modern world, work commuting still lags the pre-pandemic volume, which was roughly 30% of gasoline consumption prior to the pandemic, according to Garrett Golding, a senior business economist in the Research Department at the Federal Reserve Bank of Dallas. “A continuation of the work-from-home trend could help reduce fuel demand and increase price elasticity going forward,” said Golding in a June 2022 paper entitled “High Fuel Prices in the U.S. May Crimp Oil Demand Soon.”

Golding noted in his paper that it was too early to tell if the work-from-home trend would continue, and there has been increasing pressure from employers for employees to return to the workplace. That demand might grow as tight labor market conditions in the United States abate. Yet, there’s also a large number of employers allowing work-from-home for all or some of the week.

Lending credibility to Golding’s research, as retail gasoline prices topped $5 a gallon nationally for the first time on record in June 2022, commuting activity slowed, suggesting a loosening of the inelastic dynamic that has long tightly gripped the U.S. gasoline market. This dynamic was buttressed by anecdotal accounts during the summer of 2022 that rising costs for gasoline and groceries were prompting conservation by some motorists.

The impact of pump prices on gas demand

Yet, debt levels are far lower now than during the 2008-2009 global financial crisis, and the reason for an expected recession sometime in 2023 or 2024 would almost certainly be due to actions by the Federal Reserve, not a structural collapse caused by a housing crisis and the implosion of Lehman Brothers (the fourth largest investment bank before filing for bankruptcy) in September 2008; in the aftermath, it took seven years before gasoline demand would return to its 2008 highs. 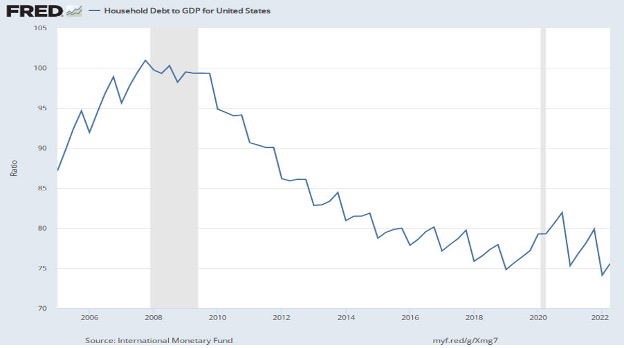 Against this history and hypothesis, one must factor in expanding efficiencies in vehicles and the gradual growth in electric vehicle sales. The pandemic lockdowns and Russian invasion of Ukraine caused prolonged global supply chain constraints that slowed vehicle manufacturing considerably. As those constraints continue to unravel, more vehicles will be sold that can travel more miles per gallon of gasoline than before the pandemic. 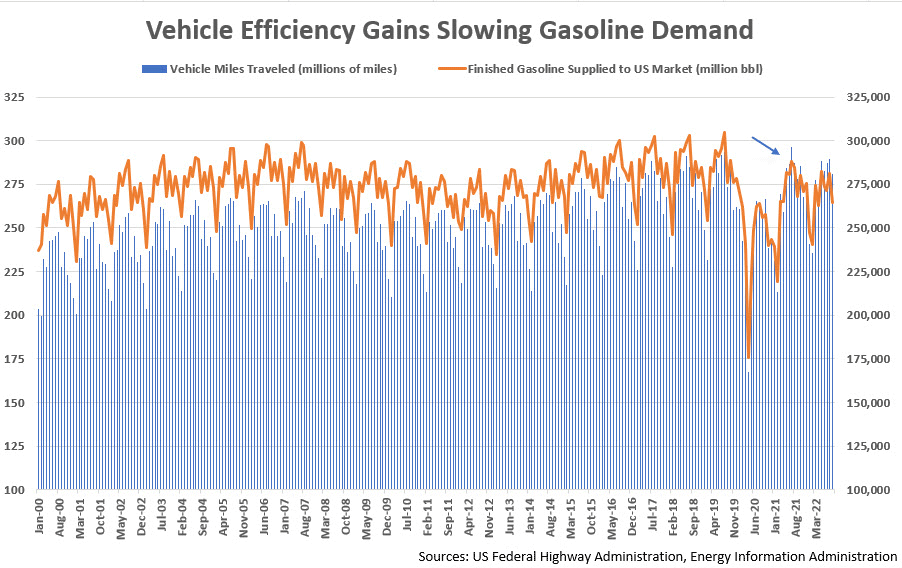 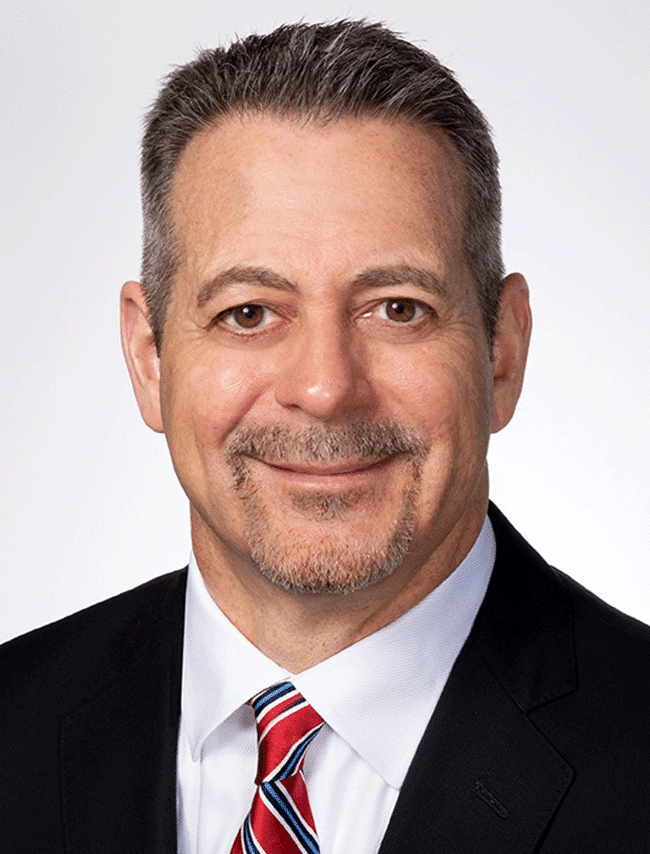