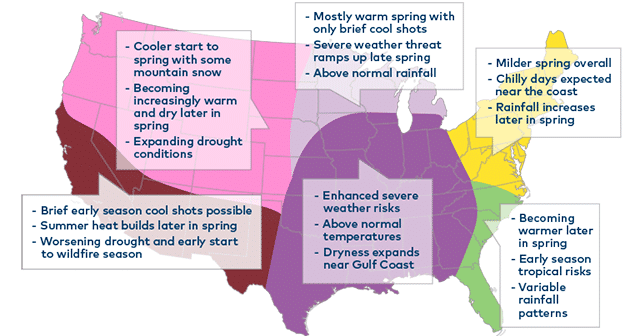 Every year, DTN conducts a spring outlook webinar to help businesses prepare and plan for the upcoming season. Below is a brief recap of the spring and severe weather outlook and the potential impact on several of the industries we serve. To get the full report with case studies read the DTN 2021 spring weather outlook report.

Although the start of the spring season in the U.S. was somewhat uneventful—and that is with 207 tornadoes to date— there is still high probability for an active tornado season. We are in a La Niña year, which historically produces more tornado outbreaks. For example, the two most recent active tornado years were 2008 and 2011 during a La Niña pattern Based on this historic look, this year’s active spring severe weather season could see more tornado activity than normal.

In addition to the severe weather probability, spring will also see expanding drought and wildfire risks in the U.S. Southwest, which will move northward as the season progresses. While there is drought in portions of the country, the eastern United States will likely see wetter conditions by late spring, and the tropical storm season will make an early appearance there. Early hurricane indications suggest there could be a limited number of tropical storms heading into the western Gulf and more moving up the East Coast.

In a La Niña year there are typically warmer than normal winter temperatures in the south and cooler than normal in the north. We found that even with these expected patterns, exceptions can exist, like when the polar vortex brought arctic temperatures and snow as far as southern Texas in mid-February.

There’s high confidence that summer will see average to hotter-than-normal temperatures across most of the country, particularly from the Plains westward. There is even a possibility that conditions could be favorable for a summer even hotter than forecasted.

The Impact by Industry

The above-average severe weather threat across the central and eastern United States and its increased volatility can bring many different weather phenomena into play, including hail, lightning, winds, and even tornadoes, both in the air and at the terminal.  And, although we typically think of clear air-related turbulence, this spring’s increasingly active jet stream pattern across the northern United States will have an impact on aircraft range, fuel burn, and performance time.

There is also increased potential for wetter conditions in the Northwest, Northern Plains, and Eastern Seaboard, which creates heightened risk for low visibilities — a concern for airline and helicopter operations.

For the most accurate and reliable forecasts, be sure to consider alternatives to government terminal area forecasts (TAFs), such as Real-time Atmospheric Monitoring Terminal Area Forecasts (RAMTAFs) and meteorological consulting. It’s a great option to support operational flexibility, especially when government TAFs are unavailable.

As businesses begin their tropical storm preparedness planning, an early indication is that we are in for another long, active season that will start before June 1 and run well into October or November. There will also be more storms heading up the East Coast. While the general pattern may be less favorable for Gulf storms this year, there will likely be some occasional periods when conditions are favorable for storms to track into the Gulf. So, a major Gulf storm is still possible this year, but there should be fewer storms overall in the Gulf than other portions of the Atlantic basin.

Tropical storm-focused forecasts with custom consultation are essential for Gulf offshore platform operations and may be especially helpful for East Coast ports and terminals this season in supporting planning and decision-making.

Planned festivals, fairs, and concerts will likely begin to resume as a growing number of Americans are vaccinated. Participation in recreational sports and activities has also increased.  In addition to the severe weather threat, the potential for above-average heat across the entire country is a cause for concern for heat-related illness

While is a major event safety hazard. temperatures, but the heat index and wet bulb globe temperatures are important for those in charge of public safety.

Many factors come into play when considering the spring outlook’s weather impacts on public safety. For most events, safety and evacuation concerns will typically be the main focus. But there are other event aspects to consider, such as the disruption of play, participant comfort, venue safety during heavy rain, and more. The bottom line is that there are many logistics to think through in terms of event safety and execution.

Those responsible for summer maintenance and operations understand the logistical challenges that severe weather can create for transportation management. Most notably in this year’s spring forecast is the increasingly active, above-average severe weather threat across the central and eastern United States. It can bring many unpredictable conditions, including strong winds, sudden heavy rains, hail, lightning, and tornadoes. Each has significant impacts on roads, infrastructure, maintenance crews, and the public at large.

Daily weather planning tools and real-time can help crews prepare for weather events and enable them to support utility crews and emergency response services with road closures and post-storm clean up.

The spring outlook presents a unique set of weather challenges for utilities. They include hotter-than-normal temperatures for much of the United States, drought, and wildfire risks in the southwest and moving northward.

The heat, and the related increased demand for gas and air conditioning, will be most prevalent in the southern and western regions of the United States. There will be a great disparity in precipitation across the country — most notably, growing drought conditions in the West that will bring elevated wildfire risks to northern California.

Another key implication of the spring forecast is the early onset of the tropical season with the elevated potential for storms to be concentrated on the East Coast — resulting in the need to grow power outage management efficiencies.

Contact DTN to learn more about how we can help you plan and prepare for weather events with trusted operational intelligence.