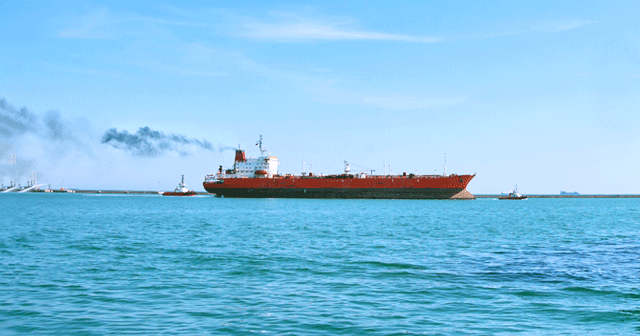 Massive ocean-going vessels that rely on diesel fuel, their decks piled high with containers, are the most common method used by shipping industry decision-makers today. However, growing global concern about carbon dioxide emissions has heightened the need and desire to move away from this type of vessel in recent years.

Working toward realizing the universal goal of reducing emissions may not require waiting for the transformation of the world’s shipping fleet to electric power or another alternative green energy source. The reduction of global emissions can begin right now with your company.

Studies reveal that voyage optimization (including weather routing + speed management) can cut up to 55% of emissions. You can work toward your emission reduction targets right away by using real-time technology that will provide business insights on the complex challenge of reducing fuel consumption immediately.

SPOS by DTN is on the leading edge of this technology. Ship captains using this system can navigate trade routes with minimal fuel consumption, which equates to reduced emissions. Emissions are decreased by the real-time calculation of optimum routes while considering current and forecasted marine weather conditions.

Now DTN Vessel Routing API built on SPOS algorithms provide a recommended, weather-optimized route that any application can easily ingest for greater ease of use. With it, you can improve your safety and situational awareness, increase the accuracy of your ETAs, better anticipate likely delays, and reduce operational and logistical costs.

Powered by advanced AI, it also delivers critical metadata for each route, so your team can quickly and easily compare various options. The API’s versatility provides the flexibility needed to generate solutions via an endless combination of routing options, including:

Let’s discuss carbon emissions, the ISO 2030 and 2050 benchmarks and how this powerful tool can help you reach those goals.

What are carbon emissions, and how does the shipping industry contribute to them?

However, CO2 released in these ways and natural cycles into our atmosphere is not the same as greenhouse gases. Supporting science shows oceans take in roughly the same amount of carbon dioxide as they give out. It is only when human activities tip the perfectly balanced scales of nature that things become problematic.

Human activities like burning fossil fuels, cutting down too many carbon dioxide absorbing trees, and destroying carbon-storing forests are only part of the problem. Carbon dioxide is just one of the greenhouse gases that trap heat in our atmosphere. This complex problem of trapped heat leads to catastrophic consequences, as evidenced by today’s prevalence of extreme weather events.

To give this statistic some perspective, the shipping industry is responsible for releasing more CO2 each year than the entire country of Germany.

Additionally, according to a Nov 12, 2021 article in the Guardian entitled, “The shipping industry faces a climate crisis reckoning – will it decarbonize?”, “Merchant ships burn approximately 300m metric tons of dirty fossil fuels each year, emitting roughly 1 bn metric tons of carbon dioxide in the process.”

Meeting emissions reduction challenges like falling in line with the lofty climate goals in the Paris agreement will not be easy. To appreciate the enormity of this challenge, the shipping industry’s emissions increased by 10% between 2012 and 2018. At this rate, the IMO predicts that by 2050 emissions from shipping could be 30% greater than they were in 2008.

To address these concerns, in 2011, the IMO mandated specific minimum requirements in connection with fuel efficiency. Then in 2018, the IMO introduced the further goal of reducing the shipping’s carbon pollution by at least 50% by the year 2050.

Initially, it may look like a modest target. In reality, it is quite ambitious, considering that this goal is expected to be achieved in tandem with significant global trade and economic growth.

More recently, in June 2021, the IMO’s Marine Environment Protection Committee brought in technical and operational measures to reduce greenhouse gas emissions produced by ships. These measures have the goal of a 40% reduction in the emission estimates of vessels by 2030.

How Vessel Routing API can help

The carbon emission reduction goals we have discussed may seem challenging to realize in the short term. Yet, there are many opportunities to practically and cost-effectively reduce shipping emissions, even in the short term. Technical/operational strategies employed could include speed management & Weather routing

What can Vessel Routing API do for you?

DTN is focused on the prosperity of your venture. Utilizing Vessel Routing API and the team of experts at DTN, you can expertly calculate routes that result in the lowest possible voyage cost, ensuring crew safety and efficient operations. A variable speed algorithm allows you to bypass severe weather, and the voyage trim optimization feature will reduce your fuel consumption.

In short, Vessel Routing API enables captains and decision-makers to safely navigate the globe with minimal fuel consumption and emissions by calculating and recalculating optimum routes and anticipating oncoming weather and sea conditions.

Learn more about the difference that this tool can make for your voyages.