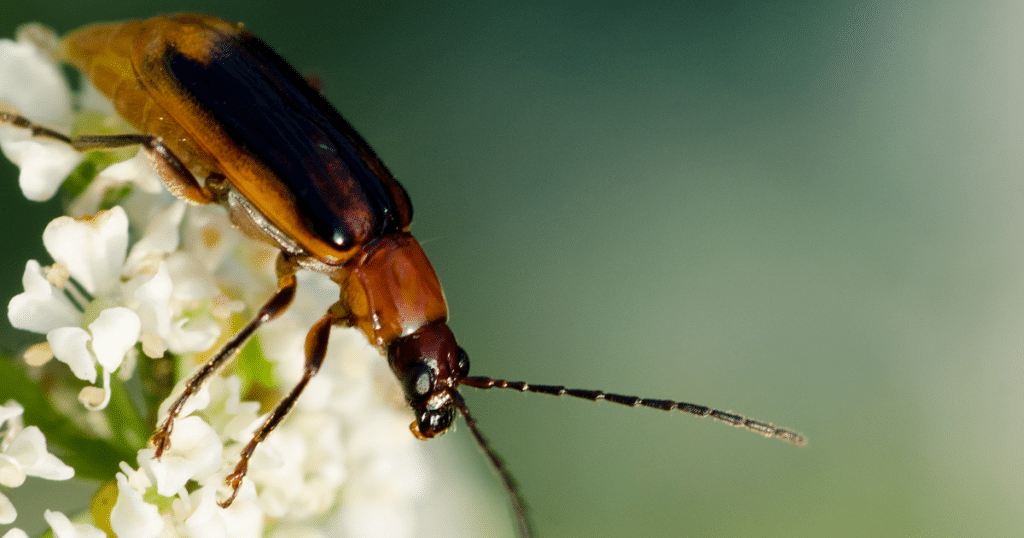 As we approach the mid-point of the season, which is trailing behind significantly in crop emergence, I share four of the most interesting insects creating “buzz” in the fields.

The showy “Painted Lady” is a bright, orange-and-black butterfly and is typically the domain of photographers and children’s classrooms. However, this season, its caterpillars have been showing up in recently emerged soybean fields. They will be easy to spot in the young plants: Look for leaves that are curled up and seem to be held together by a webbing-like material. Often the leaves will also have a skeleton-like look to them. The caterpillar will be feeding inside and usually alongside a fairly large pile of dark-green excrement. These caterpillars have a bristly appearance to the point of looking like a crown of thorns. But relax if you find them, they are not venomous and are safe to handle. In fact, we even found a wireworm hanging out with one of these caterpillars in its leafy home just this week.

Treatment is rarely necessary for thistle caterpillar, but this season may be the exception. A large population flew up from the South this year and has been spotted in soybean fields across the Midwest. Scout your fields and treat if the average leaf area consumed is greater than 30% for vegetative plants and 20% for reproductive plants. If below these thresholds, you are likely safe to tolerate the little nuisances.

Identifying the adult beetle can be tricky, given that there are three different color types that you can encounter: Yellow, red, and spotless. If you see a beetle that looks like an off-colored cucumber beetle, there is a good chance it is bean leaf beetle. Look for a distinctive, black triangle behind the neck region to confirm. The biggest threat these beetles will pose at this point in the season is to developing soybean seed pods. Feeding on the outer surface creates openings that can ruin seeds and invite mold inside. Determining when you need to control this species is complex and requires knowledge of your plants’ growth stage, the crop’s potential value, and the degree of damage. Perdue University Extension gives us a good summary for evaluating whether or not to treat for bean leaf beetle.

We have not seen corn rootworm beetles in any of the research fields yet, but it is only a matter of time until they emerge. Earlier last month, last season’s eggs started hatching and the larvae are now hungry for roots to feed on. Late-planted corn will be especially vulnerable, so keep an eye out for signs of lodging and other indicators of plant stress. The adult beetles will emerge from the soil soon. Walking your fields early in the morning or setting out yellow sticky cards will help you track them.

Once the beetles start moving around, look for signs of silk clipping and stripping of the leaf surfaces. If you run into any of the adults, you will find that they are small, yellow beetles with a black stripe running the length of their bodies. The thickness of these stripes varies among individuals, with some stripes being so thick they take up the majority of the beetle’s color.

In eastern corn-growing areas, some populations of Western corn rootworm will lay their eggs in soybean fields in anticipation that corn plants will grow there next season. It is a good idea to check both your corn and soybean fields when looking for this pest. Counting the average number of beetles per plant will give you an idea of whether it is safe to plant corn in that field next season or if rotating to another crop is necessary.

I have been seeing an uptick in the number of Japanese beetles and their cousins, the rose chafer beetles, this week. Both are troublesome pests for a number of crops, as they are ravenous foliage feeders. A lot of this damage is superficial and should not impact yields. The exception, however, is during silking in corn. These beetles love the soft, tender corn silks and will gobble them up, if available.

If you find Japanese beetles feeding on your corn, consider the following: Only treat if you have more than three beetles/ear, the silks are less than ½ inch and you still have more than 50% pollination to go. Even after treatment, continue scouting; these beetles are highly mobile and can return to the field quickly.

If Japanese beetles are in your soybeans, they will skeletonize the leaves they feed on, leaving just the veins behind. Soybeans can tolerate quite a bit of foliar damage, though, so only treat if there is 30% defoliation before bloom and 20% defoliation after flowering.

Insects are not taking a break this season, so neither are we. I will be tracking the insects outlined here, as well as others, throughout the summer. Follow me at www.dtn.com/insect-insider or on Twitter @ScottW_DTN.