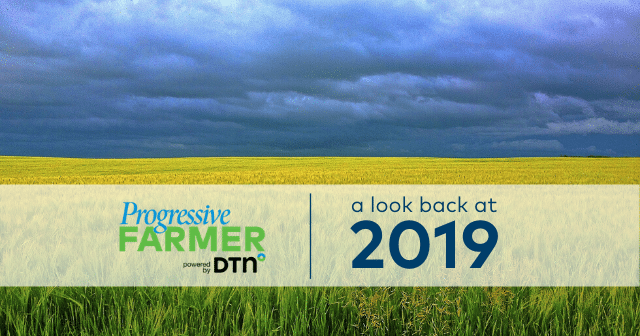 2019 was a year of memorable agriculture news headlines, from the ongoing trade war between the U.S. and China to volatile weather events, such as the bomb cyclone that resulted in devastating flooding in parts of the Midwest. Our team of journalists and analysts annually compiles the top agricultural news stories that shaped the year and 2019 proved to have many worthy contenders.

Here is the round up from the top five news events in 2019, as selected by DTN analysts, editors and reporters. Click the headline on each story to read the full article.

DTN’s number five top ag news story of 2019 covers how government assistance will be a big reason why net farm income may be the highest it has been over the past five years. Farm income’s dependency on the rise of government assistance is not the only upward trend. Delinquency rates on loans are rising for both real estate and operating notes while farm debt has hit a record high with debt-to-asset and equity ratios both climbing.

Number four in the top five ag stories of 2019 detailed how 2019 was one of the most difficult for the ethanol and biodiesel industries. Companies have been forced to close plants and reduce production due to profit margins being too far in the red for much of the year. The two major causes of the biofuel struggles are poor economics and a federal policy granting small-refinery exemptions to the Renewable Fuel Standard.

Coming in at the number three top agriculture news story of 2019 was how the cattle industry suffered due to market swings. Bitter-cold seasons, treacherous floods, the Tyson packing-plant fire, and herd dispersions are all examples of events that wreaked havoc on the market and cattle industry.

No. 2: China and the Quest to Get a Big Trade Deal for Agriculture

DTN’s number two top ag story of 2019 was the on-again, off-again tariff war with China. President Trump’s relationship with China has been a major market mover throughout the year as word of any potential deal sends commodity prices bouncing. Negotiation has been going on all year which leaves farmers hopeful that something positive will come from the tentative agreement that was reached in mid-December.

No. 1: Severe Wet Weather Storms in as Story of the Year

The number one top agriculture news story of 2019 was wet weather and its multi-billion-dollar impact on agriculture, rural areas and the lives of farmers and ranchers.

Relentless, severe wet weather seemed to be non-stop all of 2019 as various commodities and areas of the country were affected. The impact on agriculture, rural areas and the lives of farmers and ranchers was in the multi-billion-dollar region which, understandably, left quite a frustrating impact. Financials, transportation, livestock, and other items were all affected over the past year and may continue to be affected as flooding is still a major possibility for the coming spring.

A strong Arctic cold in February started the record year and was followed by a U.S. storm system that remained in place throughout the spring. Periodic bouts of heavy rain and flooding caused numerous in-season fieldwork disruptions putting farmers even further behind. The fall season did not let up as more storms brought in heavy rain and snow to harvest that was already far behind because of the wet trend.