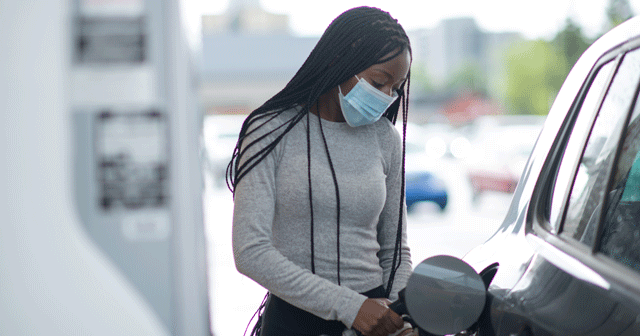 In our early December blog we circled back on the COVID-19 demand cycle for refined fuels we had discussed in prior months, using our real-time Refined Fuels Demand data to reflect on the lessons learned throughout the pandemic and to highlight how the demand cycle was stalling as a result of changing consumer behavior. Now, with governments beginning to lift economic restrictions in some of the most populous cities in the country, it’s time for an update on the state of U.S. diesel and gasoline demand and to explore what lifting these restrictions should mean for fuel demand.

Amid the pandemic, gasoline demand in the United States averaged 14% below 2019 levels in the March-December period. After sinking to nearly 50% below 2019 levels in the March-April period, U.S. gasoline demand rebounded to just 10% below year-ago levels by early summer. Gasoline demand then plateaued and—outside of holiday weekends—held near this 10% y/y deficit consistently throughout the second half of the year. However, as we progressed through the fourth quarter, demand became increasingly volatile.

Record hospitalizations and deaths due to a resurgent virus prompted renewed government restrictions to social and economic activity in several states in December. This was met with the usual Christmas and New Year’s holiday demand seasonality, leading to significant gasoline demand volatility throughout the month. At a national level, demand weakness was accelerating heading through early December as COVID-19 cases and hospitalizations were on the rise. But this gave way by Christmas, as it became increasingly clear that government restrictions were not in fact locking people down as intended. 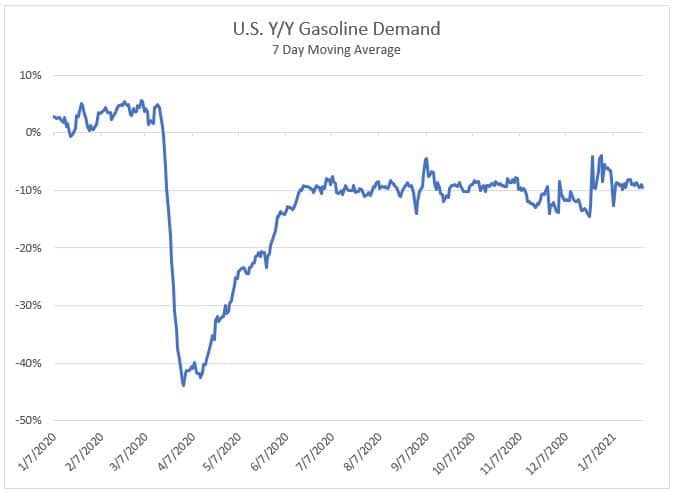 The narrowing seasonal weakness in gasoline demand despite renewed government restrictions and a resurgent virus largely reflects two trends that we had already began to witness develop through the summer: First, it became clear that a large number of American’s were largely “over” the virus. That is to say, a subset of the population grew tired of social distancing restrictions and began to ignore them when possible. Based on gasoline demand, clearly many Americans were not willing to stay at home and social distance through the holidays. Second is the trend of substituting flying for driving. Gasoline consumption appears to have been buoyed by those who were concerned enough about the virus to avoid airports but not enough to avoid travel altogether. As some travelers turned to driving rather than flying to make their holiday visits, gasoline demand was pulled higher over the Christmas period. TSA data show passenger flights on the rise over the Christmas holiday, but still down 50-60% year-on-year.

As we discussed in November, the second-half 2020 recovery in diesel demand was seen in rail traffic, as well as ocean-bound and over-the-road freight. An effort to restock industrial and consumer goods inventories, following manufacturing and logistical delays in the first half of the year, was seen alongside a major shift in consumer behavior toward making purchases online that need to be shipped to the home. Even with the sharp drop in diesel consumption last spring that brought demand 20% lower year-on-year by late May, the second-half 2020 rebound in demand pulled the March-December 2020 average to just 5% below 2019 levels for the period.

Quarterly U.S. e-commerce sales data has not been released for Q4, but was last seen up 37.1% year-on-year in the third quarter. While we do not yet have official e-commerce sales data for December, comments from the nation’s largest shipping companies following the holiday period suggest that e-commerce sales rose to new record highs. This helps explain why our Refined Fuels Demand data for December 2020 show diesel demand rising to average 2% higher than December 2019 levels, despite the weak economy, resurgent virus and renewed government restrictions. 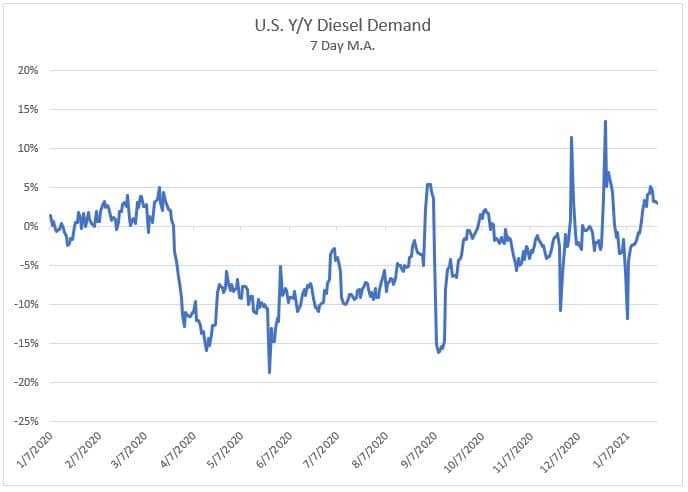 The risk of diesel demand potentially failing to start its normal seasonal rise through January due to the weight of the slowing economy and resurgent virus appears to have been mitigated by continued strength in e-commerce sales and demand for manufactured industrial goods. Although the holiday purchases peak has passed, UPS estimated in early January that online sales returns were nearly 25% higher year-on-year. Shoppers continuing to buy staples online—in addition to the surge in post-holiday returns—has come alongside continued strength in U.S. manufacturing and industrial production, which is also supporting diesel demand. The IHS Markit manufacturing PMI for December was seen at its highest since September 2014, rising from 56.7 in November to 57.1 in December. For January, the Markit Flash Manufacturing PMI hit a new record high, rising to 59.1 from 57.1. So far in January, according to our real-time refined fuels data, this has meant U.S. diesel demand averaging 2% above December’s pace and holding in line with year-ago levels for the month.

Since mid-2020 it has been clear that both fear of the pandemic itself and government lockdowns have been to blame for demand destruction in the refined fuels market. Even before the pandemic had taken off in the U.S. this fall, traffic data from across Europe showed that people voluntarily seeking to avoid exposure to the virus led to a decline in transportation fuel demand before government-imposed restrictions went into place. Using our Refined Fuels Demand data, we could see that some U.S. consumers were also voluntarily adjusting their activity and driving behavior considering the virus risk. However, as previously noted, over the course of the year it became clear that a portion of Americans had grown tired of adjusting their behavior to avoid the virus and were ignoring government restrictions to the extent that they could.

When it comes to demand for gasoline and diesel demand, there are many factors outside of government restrictions that lead to variance in demand trends between countries, states and cities. Of course, some cities and states are more exposed to heavy industry. Others are more exposed to tourism. Some cities or states rely more on public transport rather than private vehicles. The list goes on and on. Even a population’s tendency to voluntarily choose to avoid COVID-19 risk is not uniform across a geography the size of the U.S. or even across a state the size of California. In the end, there are a multitude of circumstances that determine the relative demand between key regions, states and cities as each are unique in their own way. This is not to say that government restrictions do not impact fuel demand. Undoubtedly, they do. But our Refined Fuels Demand data continues to show that regardless of state or city level lockdowns, fuel demand has still suffered as a result of individuals voluntarily avoiding social and economic activity.

Let’s take California for example. Our Refined Fuels Demand data for Los Angeles show that the city hard-hit by the virus has had disappointing gasoline demand compared to much of the rest of the country throughout 2020. Gasoline demand in the city was down 25% year-on-year in the March-December period compared to a 14% deficit for the country at large. But if we look at demand following the most recent COVID-19 lockdowns in the city for example, fuel demand did not decline. Governor Gavin Newsom announced the strictest limits on social and economic activity at the beginning of December. And yet, gasoline demand in L.A. rose 2% from November’s pace for the month of December and diesel demand rose 4% from the prior month. 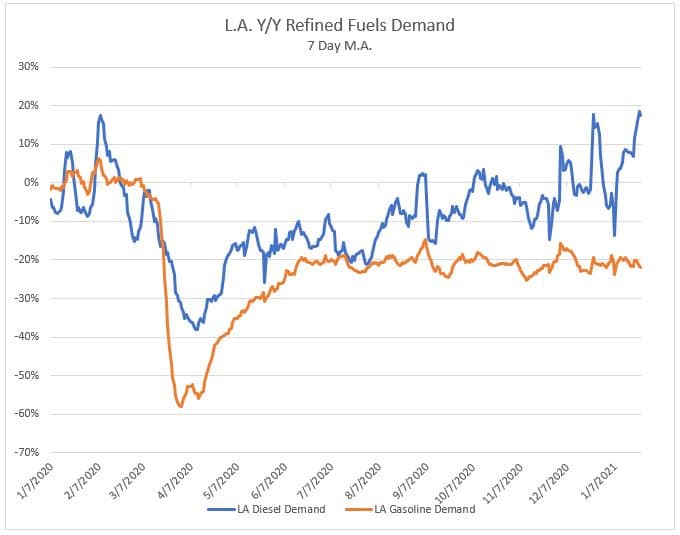 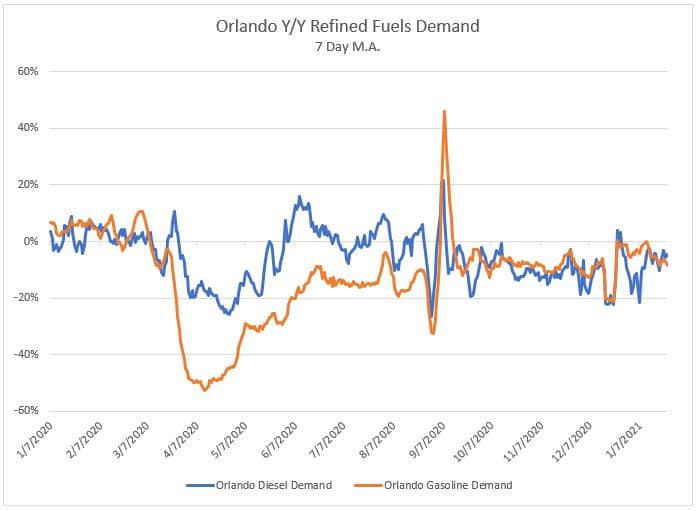 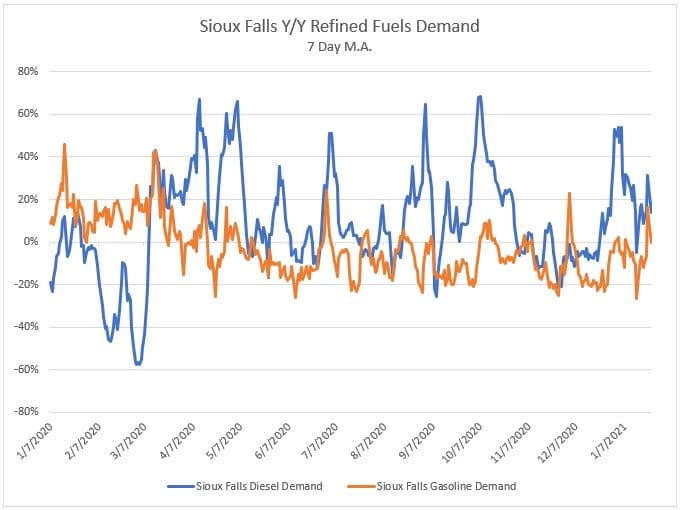 With declines in COVID-19 hospitalizations and cases moving through January and the easing of government restrictions in many states and cities, we should expect gasoline demand to stage a gradual recovery. After averaging 10% below year-ago levels for the month of December, U.S. gasoline demand is now down 2% from December levels so far in January. On a seasonal year-on-year basis, this still leaves gasoline demand down 9% from last January. Barring another resurgence of the virus as we move through the first quarter, the gradual recovery in demand should allow refineries to lift crude runs without worrying about unseasonably large builds in refined product stocks.

So far in January, according to our real-time Refined Fuels data, U.S. diesel demand has averaged 2% above December’s pace and is in line with year-ago levels for the month. While recent trends like extreme strength in U.S. manufacturing and industrial production should continue through the first half of the year as companies work to restock following the run on inventories in 2020, this strength is unlikely to persist throughout the entirety of 2021. Perhaps counterintuitively, U.S. diesel demand could weaken if in fact vaccine uptake leads consumer behavior to gradually return to normal throughout the year. There is a clear tradeoff between gasoline and diesel demand when it comes to ecommerce vs storefront shopping. Just as the surge in online shopping led to higher diesel demand in 2020, a return to pre-pandemic shopping behavior would entail the exact opposite for diesel demand, as customers return to brick and mortar stores. However, we don’t expect that in-store shopping will swiftly (if ever) return to pre-pandemic levels, and ecommerce will continue to provide a tailwind for diesel demand throughout 2021.

Demand developments over the past year have highlighted the need for timely refined fuel demand data that goes deeper than the national or even regional level. While the past year’s events have exaggerated the normal variance in demand between various cities and states, given the wide range of both voluntary and government-imposed restrictions witnessed around the country, this period has emphasized the need to better monitor refined fuels demand at a more granular level, even under more normal market conditions.