As the name implies, the EPO is a variation in the atmospheric flow pattern across the eastern Pacific, as well as Alaska. When the EPO is in a positive phase, mild Pacific air flows straight into the West Coast of North America. While such a pattern can bring significant rain and snow to the western portions of the country, the air flow warms and dries as it descends down the eastern slope of the Rockies. This results in a warmer than normal pattern across most of the central and eastern portions of the U.S. and southern Canada, particularly during the winter season. The upper level flow pattern and the distribution of warm and cold air during a positive EPO pattern is shown in the image below. 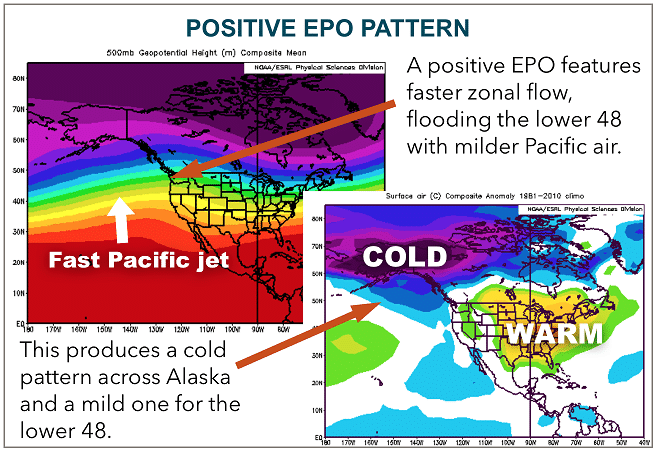 Conversely, when the EPO is in a negative phase, a ridge in the upper levels of the atmosphere is present over the eastern Pacific off the West Coast. This ridge is just an area where the air pressure, at a given altitude, is higher than in surrounding areas. That ridge of higher pressure air blocks the flow of Pacific air from reaching the West Coast. Instead, the air flows around the ridge, with a large portion of that redirected air flowing up towards Alaska and into the Arctic. As a result, when the EPO is negative, Alaska turns warmer than normal. The same ridge that turns Alaska warmer also directs more air flow southward out of the Arctic into central portions of North America. That in turn allows for cold air to build and spread southward out of Canada, resulting in a colder than normal pattern for much of Canada and the northern US. Negative EPO patterns tend to focus the strongest cold between the Rockies and Great Lakes, with the intensity and extent of the cold air largely determined by both the strength and longevity of the ridge off the West Coast. A stronger and longer lasting ridge will allow for a stronger and larger cold air mass to build, resulting in more widespread and stronger cold anomalies across the country. A typical negative EPO pattern is shown in the image below. 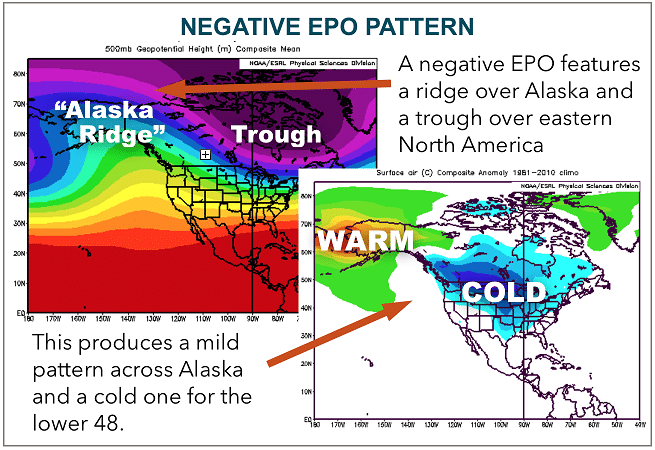