While Kilauea has been erupting continuously since 1983, the volcano has become more active in recent weeks, spewing both large quantities of lava on the northeastern flank of the volcano into some populated areas, and sending explosive bursts of ash into the atmosphere at the summit. So, will the volcanic activity there have any impact on the weather going forward? The short answer is no, though the reasons why are interesting. 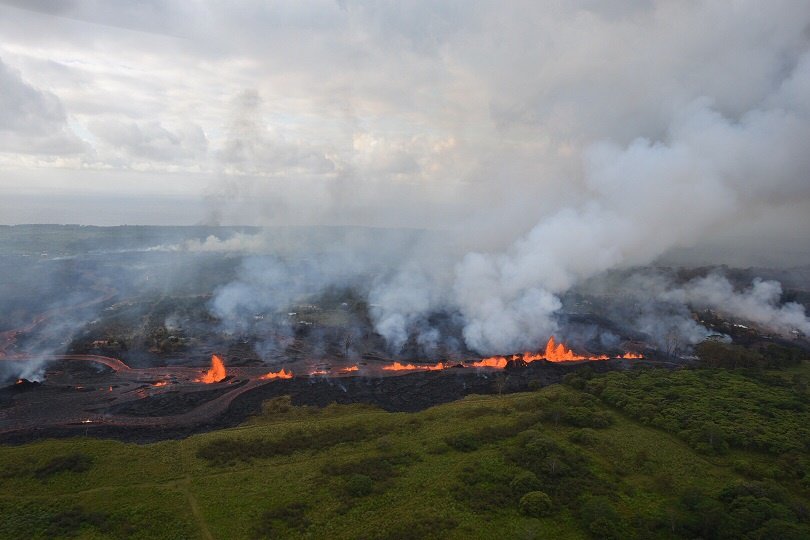 The lava flowing out near the base of the Kilauea volcano towards the ocean is releasing a significant amount of gas that can impact weather and climate, namely sulfur dioxide (SO2). However, the volume of gas released is not nearly enough to have large-scale impacts on climate, nor is it being released high enough into the atmosphere to have a long residency time. When the lava flow reaches the ocean and hits the much cooler seawater, it does produce more substantial plumes containing a mix of water, SO2, CO2, shards of volcanic glass, and hydrochloric acid gas. But these plumes remain low in the atmosphere where residency time is shorter. 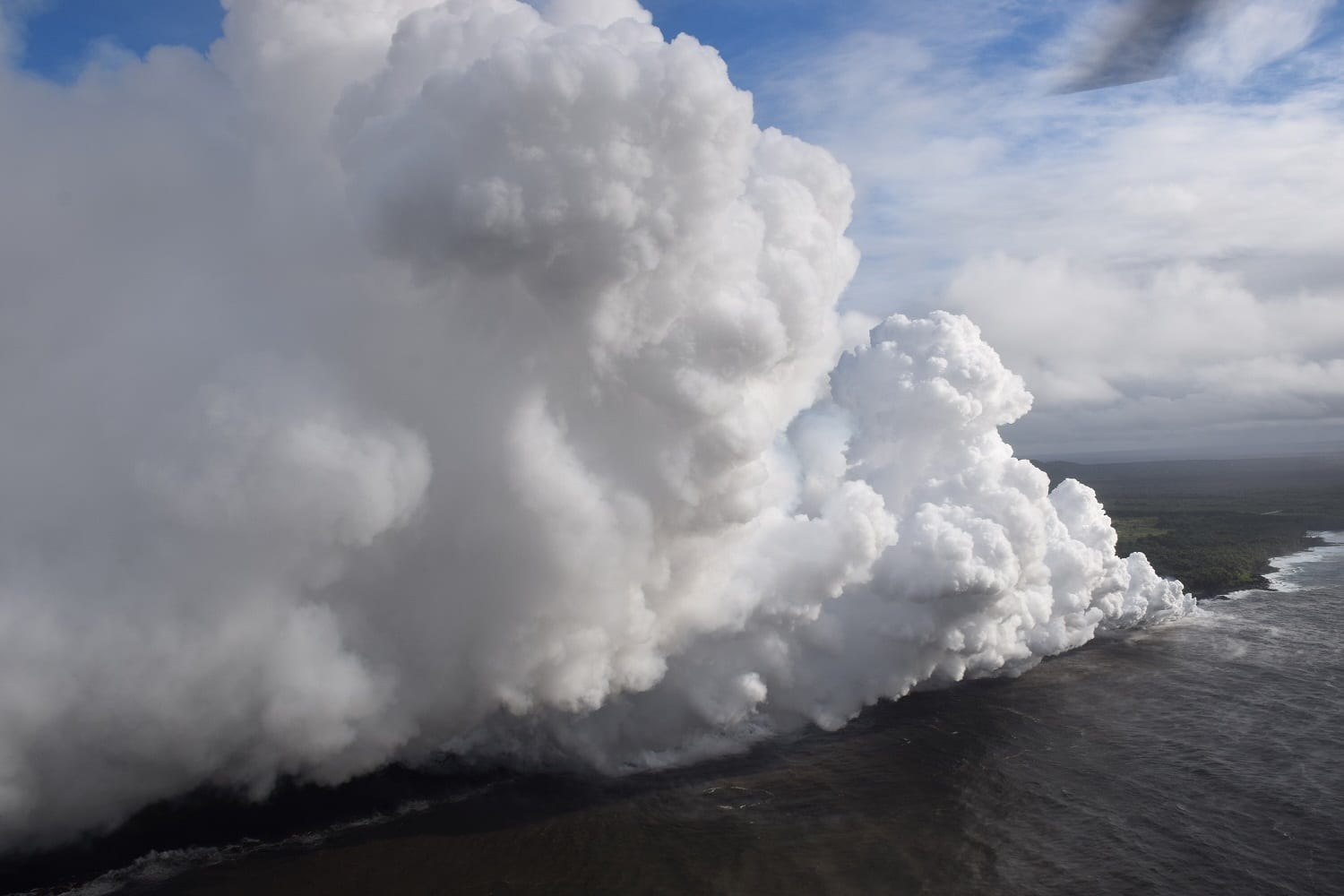 Plume of “laze” or lava haze, as lava interacts with sea water.  Image from USGS.

SO2 primarily affects the climate by reacting with sunlight and water to produce sulfuric acid (H2SO4) aerosols which are highly reflective. Those aerosols, if high enough in the stratosphere, can persist for multiple years, having a long cooling influence on climate. However, any aerosols formed in the troposphere, which can extend upwards to well over 40,000 feet in the tropics, will rapidly be removed from the atmosphere by precipitation. So, to have long-lasting impacts, those aerosols must be lofted up into the stratosphere, above the level at which most clouds form, ideally to 60,000 feet or more in the tropics. 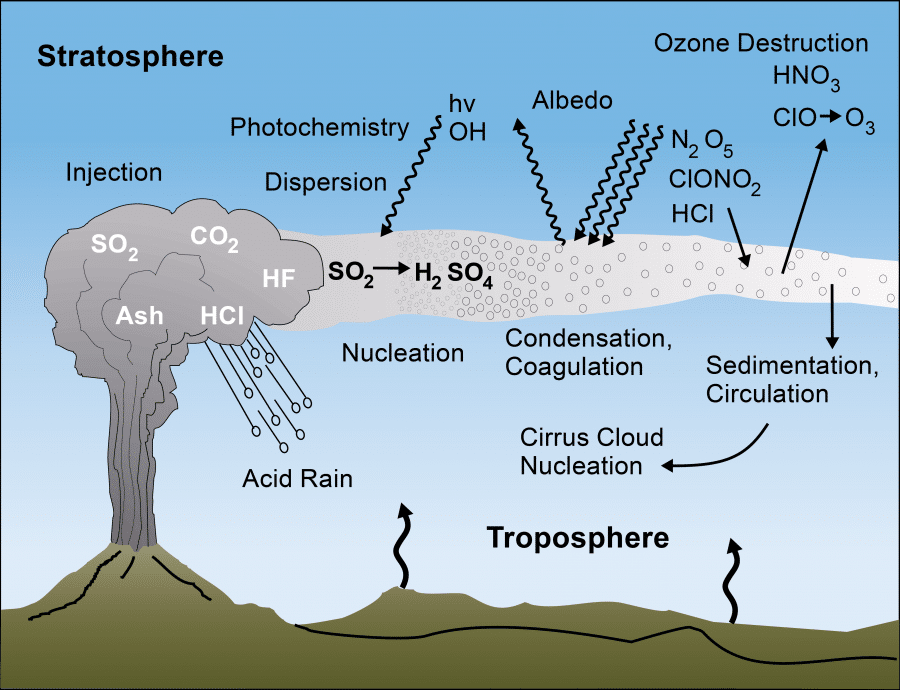 Diagram showing how a layer of sulfuric acid droplets develops from volcanic eruption plumes.  If these aren’t above the level of rain clouds, they are quickly scrubbed out of the atmosphere. Diagram from USGS.

The gas being released down near sea level from the lava flows won’t make it up to the stratosphere, but what about the explosive eruptions at the summit? With some volcanoes, eruptive columns can reach well up into the stratosphere, but to reach those heights the eruption must be magmatic, that is being fed by a large quantity of magma that is also rich in gas. A vast reservoir of magma is needed to produce enough gas to drive a long-lived explosive eruption, much like CO2 gas causing soda to spray out of a bottle after it has been shaken up. The explosive activity at Kilauea’s summit is not being driven by large volumes of gas-rich magma feeding up into the volcano, but rather by the magma interacting with water, causing steam explosions. These phreatic explosions are short-lived, and while they can be strong enough to drive ash and volcanic gas up to 30-40,000 feet, they are mainly being driven by water vapor, not SO2. The amount of SO2 gas is limited because the steam explosions are the result of magma draining out of the volcano, not rising into it. As the magma drains out, outward pressure on the main conduit the magma had been occupying is relieved, and water can flow into it. This water flashes to steam when interacting with the hot rock left behind or when falling directly on the retreating magma.

Diagram from USGS showing the process by which water flows into the volcanic conduit and flashes to steam. If the channel becomes clogged by rock falls, enough pressure can build to trigger an explosion.

Water interacting with magma produces a steady and robust plume of steam and some ash, but if rock falling into the volcanic vent blocks the vent or if steam builds in other chambers or passages within the volcano, an explosion can result. Since this activity is the result of magma flowing out of the Kilauea summit area (and likely feeding the lava flowing out lower on the volcano’s flank), the risk for a sizable magmatic eruption from the summit is very low. Before long, as the magma drains farther down and the rock within the main conduit cools, steam production will diminish, and the explosions will come to an end, possibly in just a couple weeks. However, magma could build back up within the volcano at any time, starting the process all over again, so it remains highly uncertain how long the current activity on Kilauea will persist. Regardless, Kilauea rarely stays quiet for very long. The bottom line is that while impressive looking, the Hawaii volcanoes rarely have much impact on weather and climate outside of the immediate vicinity of Hawaii, and no significant global impacts are expected this time around either.