Dorian began as a tropical wave on August 19 as it moved off Guinea and Senegal in western Africa. This is when our meteorologists began monitoring the system.

Hurricane Dorian began as an area of disturbance on August 22 about 1,800 miles to the east-southeast of the Windward Islands.  On August 23, DTN meteorologists issued a tropical depression advisory, for the system which became Tropical Storm Dorian on August 24 and moved over Barbados the next day with winds of 60 mph. Dorian made landfall there with winds of 50 mph at St. Lucia on August 26.

It took until the pre-dawn hours of the 27th before Tropical Storm Dorian moved on a northwesterly track across the Windward Islands. On this track, Dorian moved to the east of Puerto Rico on the 28th and into an extremely favorable environment for strengthening. A slow westward curve through the 30th placed the storm on a direct path towards the Bahamas while steadily strengthening

Soon after, it changed track with the consensus that it would move past Puerto Rico and through Dominican Republic. It became clear that the center would miss Puerto Rico, allowing it to attain more strength north of the Virgin Islands. 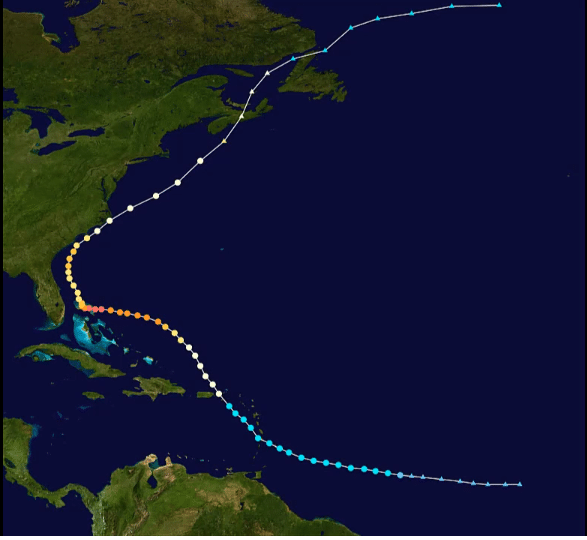 The forecast was updated indicating that Dorian would be a major hurricane at Category 3 intensity or greater. It passed directly over St. Thomas as a Category 1 on August 28.

By August 30, hurricane watches were issued for much of the Bahamas. The immediate concern was on the northwest Bahamas, as Hurricane Dorian became a Category 4 with sustained winds reaching 140 mph, continuing westward with winds increasing to 150 mph. The Bahamas are no stranger to hurricanes, but two aspects of Dorian made the storm particularly devastating: its intensification and slow motion. Rapid intensification occurred as Dorian bore down on the Abaco Islands, with maximum sustained wind speeds reaching 185 mph and gusts over 200 mph as per a Hurricane Hunter aircraft on the afternoon of the September 1.

Dorian continued north northeast hugging the South Carolina coast with winds dipping from 115 to 100 mph south of Charleston, S.C. By early Friday, September 6, Dorian was just offshore of North Carolina and made landfall at Cape Hatteras as a Category 1 hurricane and then tracked back over open waters.