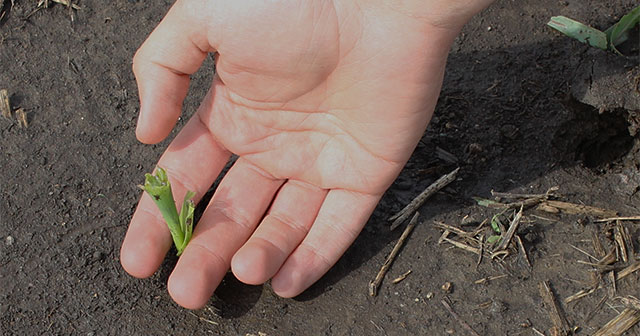 With late planting and related issues already likely lowering yields, it’s important to stay on top of later-season issues that could reduce yield further. Here are a few things to watch for in your corn fields.

While the consistent rain and cool weather has been a pain for farms, it’s been a boon for some insect pests.

Extension services across the Midwest and Great Plains have noted high numbers of black cutworm and armyworm moths flying up from their overwintering sites in the south. The caterpillars that hatched back in April are now at a stage where they are destructive to any seedling they encounter in the field. Keep an eye out for clipped seedlings or ragged leaves around the edges of your field. These are signs of the caterpillars moving in.

Pests that feed on seeds could also be a concern. Wireworms, in northern areas where soils remain cool, could be a problem even late in season.

Diseases can also thrive under the current weather patterns. Many fungal diseases could threaten newly planted corn, such as Pythium, Fusarium, and Diplodia. These fungi are common in most soils and the combination of cool, wet weather will allow them to aggressively attack vulnerable seeds. Seedling blights that affect corn before emergence will kill the young plant before their roots and stem develop and they decay quickly in the soil. You’ll see empty sections of rows if this occurs. Plants that manage to emerge, but still get sick will yellow, wilt back, and die. These plants can have poor roots and are often soft with lesions.

Not all problems come from other organisms. Flooding in the field can cause just as much stress to your crops as it does to you. Young plants can tolerate some flooding, but after four days of being underwater their roots may die from the lack of oxygen. Flooded fields may also lose a number of important nutrients through leaching or runoff; namely nitrogen, phosphorous, potassium, and magnesium. Nitrogen deficiency can cause the plant to cannibalize its stalk reserves, leading to fewer kernels to fill on the ear and increasing the chances of lodging. Young, purple-tinged plants that grow slowly in wet soils is a sign of phosphorous deficiency, which usually disappears as the plants mature. Potassium and magnesium deficiencies can lead to late-season lodging and necrosis, respectively.

Flooding effects soil in several ways. Compaction from working soils while wet is the obvious, but this year potentially unavoidable, problem. In some cases, wet soil will cause the seed trench to stay open after the planter passes. This limits the seeds’ contact with the soil and can lead to poor germination.

Also, it may be tempting to plant a little shallower to avoid drowning your seeds in the groundwater, but don’t plant shallower than 1 ½ inches. The shallow depth can cause poor root formation and this leads to lodging and late-season health concerns. Stay between 1 ½-2 inches and you can prevent these issues.

See something interesting? Visit www.dtn.com/insect-insider and submit a question to the “Ask Dr. Scott” section.